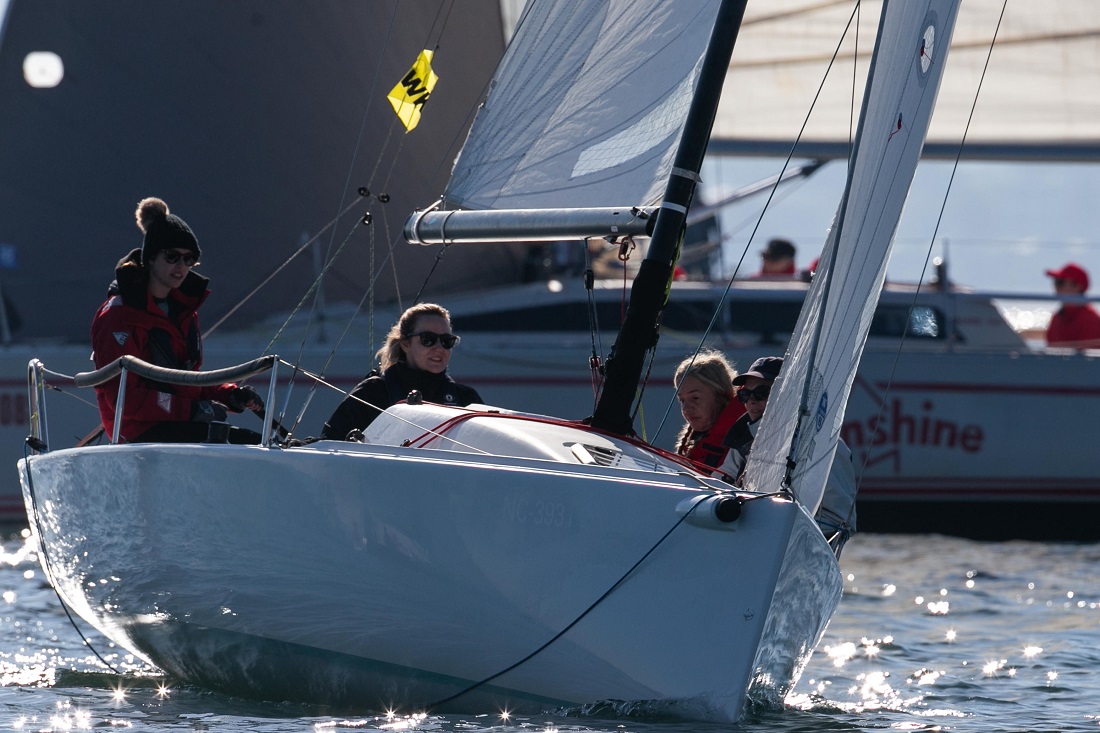 A record 40 entries will take part in the 2019 Australian Women’s Keelboat Regatta (AWKR), hosted by Royal Melbourne Yacht Squadron (RMYS) over this long weekend; the 40th entry coming from Ocean Respect Racing and to be headed by well-known sailing identity, Katie Spithill.

Numbers far exceed last year’s record haul of 27, thanks to the hard work of the club and in particular Kristen Buckland, the AWKR Committee chair and competitor on Monica Jones’ Adams 10, Salamander III.

“I think it’s fantastic to know there are 40 competitive female boats and crews. It shows times are changing for women in sailing and we have to keep pushing. It’s also a real testament to those boat owners who have loaned their boats, allowing so many more to compete,” she said.

Spithill says there are five from Ocean Respect Racing’s 2018 Rolex Sydney Hobart crew (including herself), who finished the 628 nautical mile race second overall in 2018: “It’s a very strong team and I’m pretty excited about having five from the original program and to continuing its message.”

The other four are: Carolijn Brouwer (multiple Olympian and Volvo Ocean Race sailor who won the 2017-2018 edition. She has twice been named World Female Sailor of the Year, including 2018 as one of two of the first women to win the VOR; on Dongfeng); Sophie Ciszek (bow woman on numerous elite Sydney Hobart boats and two VOR’s, the latest on Mapfre in 2017/2018 and a guest speaker for the AWKR lecture series); Sarah Crawford and Jade Cole.

“We were lucky to be offered a choice of two boats by the organisers, but then Jade (Cole), who lives in Melbourne, said we could use her father’s M.A.T. 1010. It’s a great opportunity for us to get back on the water together to race and keep the message going about Ocean Respect,” Spithill ended.

The Ocean Respect message is one RMYS members are also across, conveying to competitors; “We’re trying to cut down on single use plastic this year, so please bring along reusable water bottles.”

Other high-profile sailors entered include triple Olympian Karyn Gojnich, the first female flag officer in Royal Sydney Yacht Squadron’s 156-year history. She will be at the helm of the J/70, Spike.

“I have a great bunch of girls sailing with me, regular Yngling crew; Sarah Ladd who came with me to Yngling Worlds in Lake Garda (they were the only all-female crew there) and Olga Skatkova. We’re looking forward to sailing the J/70. We haven’t sailed one before, so we’re practicing on one here at RSYS before heading to Victoria,” she said.

Gojnich contested the AWKR in 2017 and says of the event, “The camaraderie blows me away and they are all so enthusiastic. It’s amazing – it makes you want to be part of it and I’m looking forward to returning.”

There are also a number of newcomers, those who were new in 2018 and past winners returning. It is a regatta for women of all standards and an opportunity for newcomers and club racers to mix it with some of the best in the world. The AWKR encourages women of all ages and standards to compete.

Among those this year is Lieutenant Commander Kirstin Norris, who is bringing a team from the Australian Defence Force. Norris, a RAN Marine Engineering Officer, is a competitive Moth sailor and match race who helmed Rock N Roll to Division 2 victory at the 2016 AWKR.

“We have members from Navy, Army and Airforce across all ranks whose sailing experience varies dramatically. One crew (Flight Lieutenant Narelle Sheridan, an RAAF Weapons Systems Officer who flies Super Hornets) is brand new to sailing, while Major Candice Cushway (an Army Logistics Officer) completed the 2017 Sydney Hobart in the Army Sailing Team and skippered the return,” Norris said.

Apart from the overall winners of the two Open division and the S80 Division in AMS (which decides the winners), IRC and EHC, the event offers trophies for Novice Helm – The person must not have helmed regularly for more than 12 months and their first time helming at the regatta; Most Improved; Sportsmanship; the Rohan Brownlee Leadership and Endeavour Award and Best Performed Owner/Skipper.

To be held over the long weekend, from 8-10 June, two races per day will be sailed starting from 10am. The fleet represents every Australian state, the Northern Territory and New Zealand.

Prospective entrants have until 1700 hours on Friday 31 May, 2019, to enter. However, late entries may be accepted at the discretion of the event’s Race Committee.