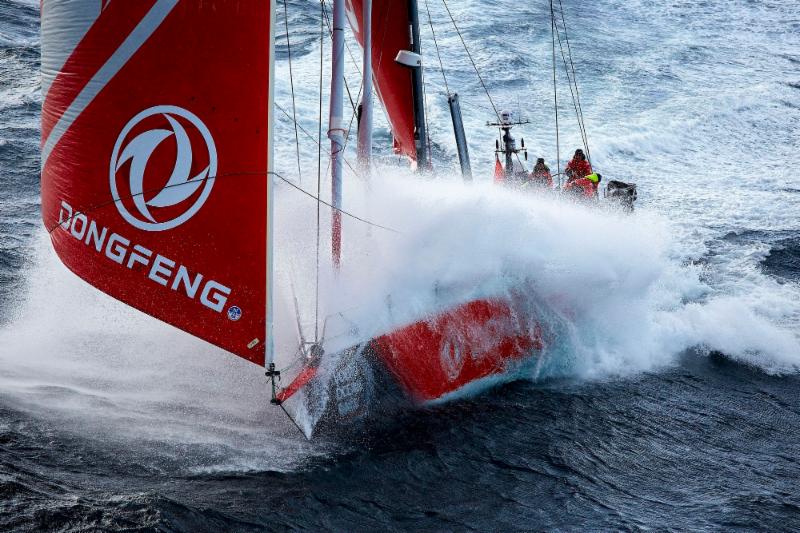 Among the 400 boat fleet setting off from the Solent on 6 August in the Rolex Fastnet Race will be three of offshore racing's most prestigious classes.

Grabbing the headlines will be the one design VO65s as the Rolex Fastnet Race serves as Leg Zero of the Volvo Ocean Race and it will be the first occasion the teams will have lined up in anger. Among the seven, three teams competed in the 2014-15 Volvo Ocean Race: 2nd placed Team Brunel; the Chinese Dongfeng Race Team, third last time and the Spanish MAPFRE team, which finished fourth. In one designs, experience is everything so these teams will have the edge, but crew from other boats in the last race have been distributed across the new teams too.

Dongfeng Race Team benefitted from being first to get sailing this time, picked their boat up post-refit late January. They have several of the same crew and have focussed more on the competition this time, says skipper Charles Caudrelier. “Last time we spent the first five months in China doing crew selection. We put 30% of our time into performance. This time we put in 70%.”

This year's Rolex Fastnet Race will be Caudrelier's third. In 2011, on the VO70 Groupama, they finished just behind Abu Dhabi Ocean Racing, whose time of 32 hours and 39 minutes remains the monohull record. “I like the race because it is interesting – short and complicated with lots of transitions,” says Caudrelier.

While Dongfeng is a favourite, late to the party is Turn the Tide on Plastic, skippered by Dee Caffari, their campaign was only announced mid-June.

Caffari is a big fan of the Rolex Fastnet having completed her first on a Challenge boat in 2001. She was on Team SCA two years ago: “It is an ocean classic everyone wants to do. It covers such a range of boats and sailors, it is like an oceanic version of Round the Island Race.”

Former Team SCA skipper Sam Davies has returned to the IMOCA 60 class. She has taken over the Initiatives Coeur campaign from Tanguy de Lamotte but the two are sailing together for the rest of 2017.

“Everyone is happy Sam's in the driving seat. It is a great continuation for the project,” says de Lamotte. Davies, who also raced with de Lamotte in 2015, said: “I am very excited Tanguy gave me this opportunity. It is a project that I know every well – a cool boat, a cool team and cool charity project to be involved.” It supports Mécénat Chirurgie Cardiaque, which funds operations on children born with heart defects. They are sailing the foil-assisted IMOCA 60 that finished the last Vendée Globe in third.

As with the other eight IMOCA 60s competing, they are racing the Rolex Fastnet Race doublehanded. Before sailing the race together in 2015, de Lamotte won it twice in the Class40, while Davies' first race was in 1995 on a Sun Legend 41 and she has done it countless times since.

They are up against the boats which finished first and second in the Vendée Globe: Bureau Vallée 2 (ex-Banque Populaire) campaigned by Louis Burton and Servane Escoffier, and Alex Thomson and Irish sailor Nicholas O'Leary on Hugo Boss.

For Thomson, the Rolex Fastnet Race has played a huge part in his sailing career. “My first was in 1995 on a Sigma 36 called British Eagle – it took just over seven days – but in that race I found my love for offshore racing. That's the great thing about the Fastnet – it introduces people to proper offshore racing.” The 2003 race was the first occasion Thomson sailed under the colours of Hugo Boss, preluding a 14 year sponsorship deal.

This time, Thomson who is sailing with Nicholas O'Leary is hoping to beat the other IMOCA 60s but is bullish about taking on the larger boats in his foil-assisted weapon. “Downwind we're quicker than a VO65 and if you give us the right conditions (22-25 knots, broad reaching) we can beat Rambler, but in the Fastnet you don't get to choose the weather you sail in.”

Most significant in the Rolex Fastnet Race's non-IRC line-up is the 34 boat Class40 fleet. In this are a mix of pro sailors and enthusiastic amateurs and boats ranging from state of the art reaching machines to old production boats. It is also one of the most international line-ups including Russia and Japan, Sweden, Norway, Austria, the Netherlands, South Africa and Oman.

The Rolex Fastnet Race will be the first event for the newest, most radical Class40. Louis Duc's Carac (150) is a Marc Lombard design and has the highest volume bow permitted under the Class40 rule. The latest models from all the leading Class40 designers are competing such as Brieuc Maisonneuve's Cap Des Palmes, a Guillaume Verdier Tizh 40; Norwegian Henrik Bergesen's Hydra, a brand new Owen Clarke design; two new Sam Manuard-designed Mach 40 Mk3s, Maxime Sorel's V And B and Catherine Pourre's Eärendil.

President of the Class40, Halvard Mabire, is racing Campagne de France, a new boat to his own design, with his English partner Miranda Merron. Mabire's first Fastnet was in 1977. “It was on a small plywood boat with hard chines. It was one of the slowest Fastnets in history – very very light all the way. I did it again in 1979, which was not the same story.” He has since done the race as part of the Admiral's Cup and on a Maxi One Design. “The Fastnet is one of the oldest races. It is very nice to have this race – we know it will happen every two years. It is good that the RORC opened it to multihulls, IMOCA 60s and Class40s.”

As to the form, the favourite is, for once, not French, but from the Channel Islands. Following his 2006 Route du Rhum victory, Phil Sharp has returned to the Class 40. His yacht Imerys currently leads the 2017 Class40 championship, following their second place in the recent Les Sables-Horta-Les Sables race.

The Rolex Fastnet Race starts from off Cowes at 1100 on 6 August.