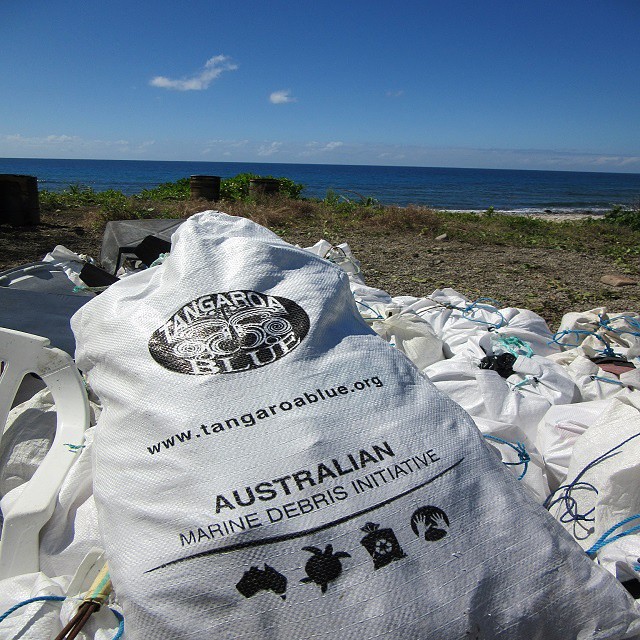 To all who have a love for the environment and in particular our oceans: Save the ocean, protect your passion and make an impact, is the message from all at the Ocean Racing Club of Victoria (ORCV).

Recognising ORCV’s ‘keep plastics out of the ocean’ efforts in the recent Melbourne to Apollo Bay Ocean Race, Sailors for the Sea awarded a Gold Certification for sustainability of an event to the club – the only Australian entity to receive a Gold Certificate in 2019.

“The fact is, eight million metric tons of plastic waste enters the ocean from the land each year and the problem we face cannot be solved in isolation,” says ORCV Commodore, Martin Vaughan.

“On a recent 4WD trip to Cape York, I was on an isolated beach. I was shocked and saddened to see the amount of plastic washed up on the beach. It needs to stop,” he said.

Co-founded by David Rockefeller Jr. and Dr David Treadway in 2004, and headquartered in Newport Rhode Island, Sailors for the Sea works to engage the boating community in the worldwide protection of the oceans. Through its Clean Regattas and Ocean Watch programs, as well as its Green Boating Guide, the organisation successfully motivates boaters to become environmental stewards.

“We are thrilled that the Ocean Racing Club of Victoria has made a significant commitment to reduce their environmental footprint which will help protect our precious oceans,” Shelley Brown, Education Director, Sailors for the Sea Powered by Oceana said.

“The ORCV Apollo Bay Ocean Race achieved Gold Level Clean Regattas certification for all of their sustainability initiatives on and off the water. It is a model for eco-smart sailing.”

This year, the ORCV, through the race, set up a most successful campaign: ‘Plastics out of the Ocean’ as part of ‘Clean Seas’. It urged participants to share ideas on how they can run a more sustainable boat.

Through this process, the skippers and crews of Algy Rose, Blue Water Tracks, Shimmer and Faster Forward raised $2,525 for Tangaroa Blue, whose focus is treating symptoms and preventing pollution in our marine environment. The organisation is dedicated to the removal and prevention of marine debris, one of the major environmental issues worldwide.

Alvaro Maz, from the crew of Faster Forward, championed and pioneered ‘Plastics out of the Ocean’.

Maz explained: “As someone who cares about the health of our planet, I’ve always been interested in ways that I can have an impact that scales; something that can change behaviour and the value we put on our natural environment, not just create more choices to greenwash our everyday living.

“Unfortunately, most of the options I’ve found have had limitations. Things like volunteering for a beach clean-up, working for a conservation organisation, or donating regularly to a foundation. When I started thinking as a group, however, like the sailing community I’m involved in, things changed.”

Among Maz’s questions were:

What if we could get everyone to pledge not to use plastics on their boats?

What if we could get every yacht club to recycle properly?

What if we could support those organisations undertaking prevention, advocacy, recycling and education?

And what if we could spread the love we have for the ocean with the people that are closest to us that do not sail?

“So the idea was spawned. We found a crowd-funding platform that did not take any money from the fundraisers, the Tangaroa Blue Foundation. Then we did what most of us do once we have a plan, we created a WhatsApp group to get the ball rolling,” Maz said.

Simon Dryden, a Life Member of the ORCV, suggested running a mini version of campaign for the Apollo Bay Race, the theory being once the proof was in the pudding, it could be grown to take in major sailing events around Australia.

The club has long held an interest in supporting ocean conservation, so it was a natural fit. As a first initiative to raise funds to rid the oceans of plastic and promote sustainable ways of running boats, all involved achieved and learned a lot.

In less than four weeks, competitors had raised a total of $2,250 that was donated to the Tangaroa Blue Foundation.

“Change only happens when people like us get together and take action for an initiative we care about,” Maz said. “I’m excited that this is just the beginning of spreading our love for the ocean. Together, as a sailing community coming together, we can to take care of the place we love and spend so much time on.”

Here are five starting tips that can contribute to running a more sustainable boat:

1. Use reusable water bottles over plastic bottles.
2. Take food in reusable containers, or use reusable silicone ziplock bags (if food needs heating or re-heating).
3. Use the boat’s cutlery/plates over disposable ones.
4. Consider what food you take on board.
5. Recycle post-race.