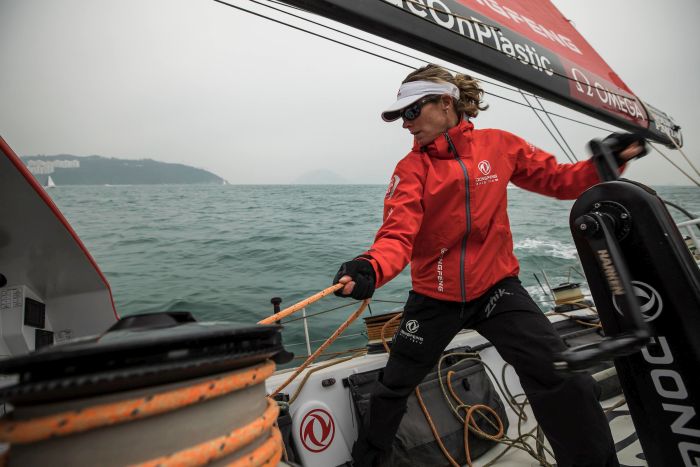 The Mange Olsson Memorial Foundation has revealed that Carolijn Brouwer – one of the first females ever to win The Ocean Race in the 2017-18 edition – has scooped its prestigious award for 2019.

The Magnus Olsson Prize is awarded annually to an individual who has made an impactful contribution to the sport of sailing – and previous recipients include The Ocean Race winners Torben Grael, Grant Dalton and Stan Honey along with Olympic sailing legends like Sir Ben Ainslie and Santiago Lange.

The reasoning: Like few other sailors, Carolijn Brouwer has showcased an ability to perform at top-level in several disciplines of the sport of sailing. In a sport historically dominated by men, Carolijn has pushed the boundaries and been a true pioneer showcasing how women can race competitively, and win, against men. Her outstanding track-record includes racing in three editions of The Ocean Race and competing in three Olympic Games. Carolijn was also awarded the World Sailor of the Year Award in 1998 and 2018.

Brouwer became one of the first females to win The Ocean Race – dubbed the ‘toughest test of a team in sport’ – when she competed in the 2017-18 edition of the event onboard Dongfeng Race Team.

The achievement was notable not just for making history, but for being part of an edition pioneering future pathways for female participation – every boat in the Race featured a mixed crew – and The Ocean Race is one of just a few global sporting events featuring world-class male and female athletes competing alongside each other on the same team.

Brouwer described winning The Ocean Race as ‘a dream come true’ and achieved her childhood goal at the third time of asking, having first been a crewmember of the all-female Amer Sports Too and Team SCA campaigns in 2001-02 and 2014-15. It was during her time as a key member of the SCA crew that Carolijn worked closely with Magnus, who was Team SCA’s coach at the time of his passing in 2013.

“It’s an honour to be awarded this prize and counted amongst sailing legends and The Ocean Race winners – it’s hugely inspirational,” said Carolijn. “Myself and the whole Team SCA had a special connection with Mange – I think everyone who knew him would say the same thing – and the first thing everyone talks about is his smile. The endless smile that he had on his face, his love for sailing and life in general, and his determination to never give up was infectious.

“The lessons I learned from Mange have shaped me into the sailor and the person that I am today. His values will keep guiding me through the rest of my life. I have Mange to thank for the start of my offshore sailing, but also for the win in the last edition of The Ocean Race with Dongfeng.”

She added: “I know that Magnus would be hugely proud of me becoming one of the first women to win The Ocean Race – it’s thanks to him that I had that opportunity. Team SCA was the first all-female project in 12 years, and the mixed rule in the 2017-18 edition would never have happened if it wasn’t for the SCA campaign. Magnus played a key part in that, and there are many women in our sport that have him to thank for helping them to get to where they are now in their sailing careers.”

Carolijn is a true team-player with a genuine personality and high integrity. These attributes combined with her love of sailing contributes to her being one of the most admired and liked people in the sport of sailing. She is down-to-earth, devoted to her family and dedicated to sharing what the sport has given her.

The Magnus Olsson Prize and the Scholarship Awards will be presented at a ceremony in Stockholm August 29.