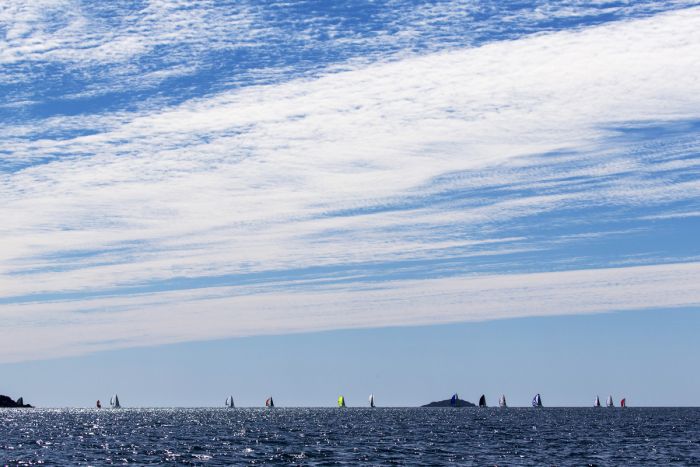 Racing was delayed for a couple of hours, but finally got underway at the Whitsunday Sailing Club’s 2019 Airlie Beach Race Week, with 5 knots starting the day off and the entire fleet headed from Pioneer Bay and up past Double Cone Island, conditions peaking at 12 knots before dying out again.

The two TP52’s put on a show for spectators; Gordon Ketelbey’s Zen leading Marcus Blackmore’s Hooligan up towards Double Cone, but a mile or so short of the Island, Hooligan shifted up a gear and took the lead.

The Sports Boats were more defined; as Andrew ‘Yorky’ York’s brand new REO Speedboat took off like Usain Bolt, leaving the rest of the competition looking on in wonder.

“We started down the line from most of the other sports boats. I said to the guys that dirty air from fast boats is good, so we were there with the multis,” York said, “because they would get away fast.

“We had a great leg from the start to the Island, but the two bigger boats (Crank and Skeeter at 8 metres each) got in front, and we were third. At the finish line it was Vivace, Skeeter, Crank and us,” York said.

“I think we might have scored second when the handicaps were applied; we’re just waiting to hear. It was a nice pleasant outing for the first race, so we’re pretty happy with that.

“The REO Speedwagon is only half a metre longer than my other boat with 30 percent more sail area; we’re still working it out.”

There are both boat and family rivalries in the Sports Boats, so a lot at stake. More on that tomorrow…

Airlie Beach Race Week Festival of Sailing is also hosting the Australian Multihull Racing Championship. In Division 1 it was on for young and old.

Ever-competitive Paul Mitchell and his Grainger Apex, Ullman Sails, gave the rest of the division a wide berth, choosing to go way off to the left of the course. Tony Considine’s new foiling VI, Mad Max with George Owen helming, and the four Extreme 40’s took the middle road and the remainder gave chase.

When Mitchell finally tacked over, Ullman Sails was marginally ahead of Julian Griffiths’ bright orange Extreme 40, The Boatworks, which last competed here in 2016. The remaining three Extremes are recent arrivals in Australia and are being showcased here at Airlie Beach.

Tony Considine’s new TF10 is making its debut here and was designed to target boat speed three times true wind speed. It was the first multi up and foiling today.

After racing, Considine explained the rationale for buying the new boat: “We basically won everything with our old boat, so we talked about building a new one and what would it be. We were talking about the America’s Cup foiling boats and thought it would be great if we could find a foiling tri, but it had to be trailable; we needed to move it around easily.

“We looked around and found a DNA TF10 foiling trimaran and the guys (headed by Mad Max’s skipper, George Owen and Considine’s son took it for a sail and that was that.

On today’s first race with the new 11 metre tri, Considine said, “It’s fun to sail, but she won’t get up and foil in the light air we had today.”

IRC Passage, Performance Racing, Cruising Divisions 1 and 2, the Sports Boats and Multihull Racing Division 2 were on Course 9, the latter two divisions were later shortened in the light breeze.

On the Multihull Division 1 course, the boats were struggling to finish as the breeze lightened right off.

Multihull Racing Division 1 was on Course 11 while the remainder of classes sailed Course 12, with 109 boats racing across the fleet.

Racing continues tomorrow, when the forecast is for more light air. If it comes with a blue sky, sparkling Whitsunday tropical water, warm sun and the odd whale, as it did on Day 1, who is going to complain?

Tonight at WSC, the crowds are being entertained by music from Hybrid.

Full results and all information: www.abrw.com.au