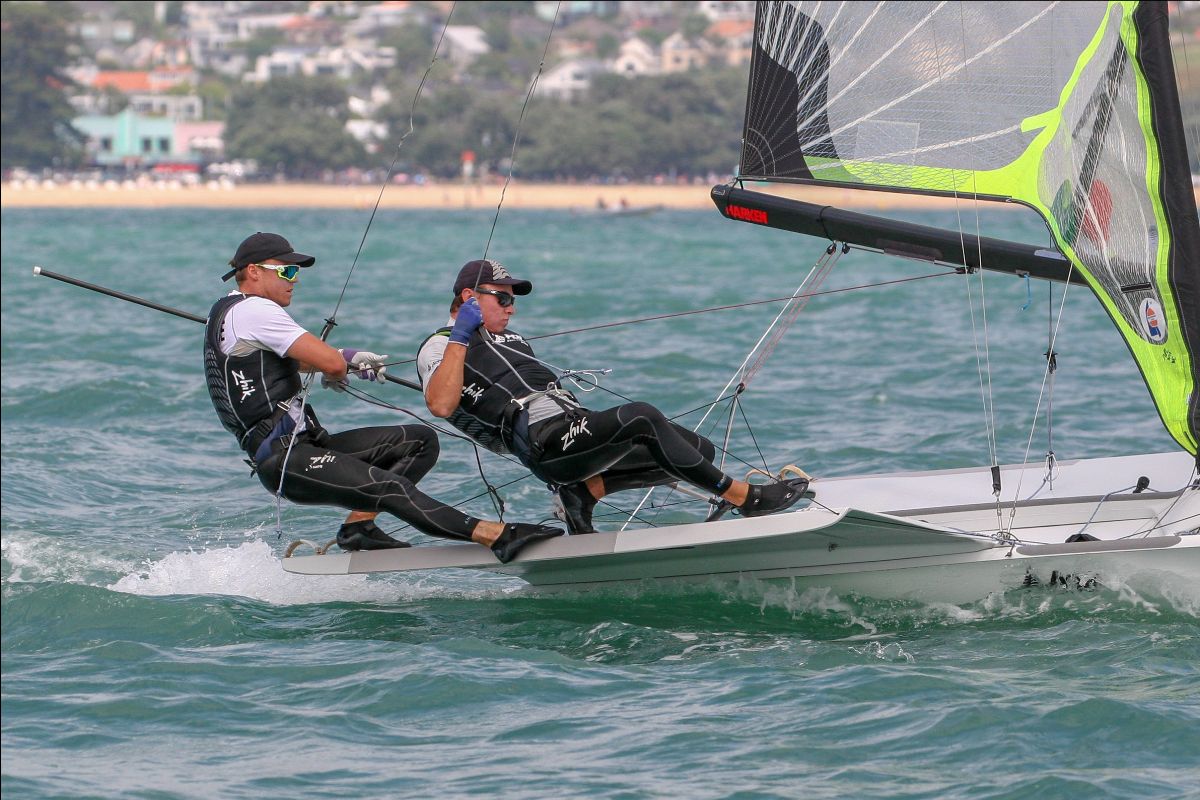 Isaac McHardie and William McKenzie will be among as many as 400 competitors expected at December's world championships. Photo: Yachting New Zealand.

As many as 400 of the world’s best sailors, including New Zealand’s Peter Burling and Blair Tuke and Alex Maloney and Molly Meech, are expected to compete at the world championships in partnership with Hyundai New Zealand at the Royal Akarana Yacht Club from December 3-8.

Not only will world titles be on the line, but many countries will be using it as an Olympic selection event so the stakes will be high.

Sky Sport will screen live all six days of racing – six races a day – and also produce a daily highlights package, which will also be shown on free-to-air partner Prime TV.

On-the-water gyroscopic cameras will capture all the racing action, including state-of-the-art drones, and there will be comprehensive analysis and interviews from the boat park before and after the racing presented by a team of sailing experts.

Tracking and animation will also be provided by Animation Research Ltd, who are world leaders in graphics visualisation.

“We’re proud to be the host broadcaster for this great event, and we look forward to bringing sailing fans racing coverage from December 3-8 on Sky Sport,” Sky head of sports production Brian Hitchcock said.

The scale of the production is believed to be a world-first for an Olympic class regatta and will enable New Zealand fans to get close to the action. Negotiations are also progressing to distribute the feed internationally.

The 49er, 49erFX and Nacra 17 are arguably the most exciting of all of the Olympic classes, with the boats reaching speeds in excess of 20 knots.

Burling and Tuke have made a successful comeback to the 49er after a couple of years focusing on the America’s Cup and Ocean Race, winning last month’s Olympic test event in Japan, and will be looking to add a fifth world title in December.

“To have a passionate New Zealand audience and our global fanbase be able to watch the whole thing is wonderful for the sport.”

The regatta is one of the highlights on the upcoming sailing calendar, which also includes February’s RS:X world championships in Auckland as well as the 2021 America’s Cup.

“It’s a great time to be involved in sailing in this country,” Yachting New Zealand chief executive David Abercrombie said. “With Sky Sport’s partnership, we have an opportunity to further inspire our young sailors through sharing content, telling stories and showing live just how exciting sailing, and in particular, 49er, 49erFX and Nacra 17 sailing, can be.

“As a passionate nation of sports enthusiasts and sailors, we look forward to what promises to be an exciting week of competition and thank Sky Sport for their commitment to work with us in showcasing sailing and Auckland and New Zealand.”