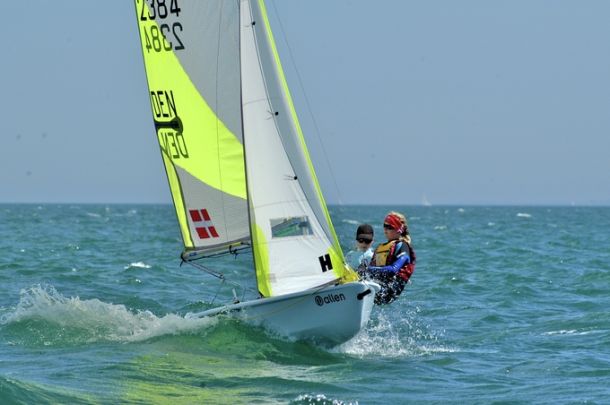 The 2021 RS Feva world championships are coming to New Zealand and are likely to be held at the same time as the America's Cup in an effort to attract a large international fleet.

New Zealand was confirmed as the host for the 2021 at the RS Feva class association annual general meeting in Italy earlier this week.

As many as 200 crews are presently in Italy for this year's world championships and New Zealand sailors have made a terrific start, with crews first, fourth and seventh after two days of qualifying.

“Being an open worlds, this represents a great opportunity for New Zealand sailors and visitors. The chance to compete at worlds level, in an exciting boat, on New Zealand water with the sailing world spotlight on Auckland will be unique.”

The RS Feva has grown enormously over the past few years as an uncomplicated boat with a gennaker clubs can use to introduce youngsters to double-handed sailing. It's also low maintenance being made from a polyethylene PE3 layer system.

It's estimated there are between 120-130 boats spread around the country, including a significant number used by the likes of the sea cadets, and there were 36 crews who competed at this year's national championships at the Torbay Sailing Club.

The 2021 world championships are likely to be hosted by an Auckland club, which will be confirmed in the coming weeks, and scheduled in between the Prada Cup and America's Cup match to make it a more attractive proposition for international sailors. It could result in as many as 200 boats competing and will mean there will be opportunities for clubs to purchase boats used for the world championships after the regatta.

“The RS Feva has been a popular club boat in New Zealand and now we are seeing a large number being bought privately as well,” Eele said.

“We are supporting this growth and the pending worlds by ensuring the coming season's traveller series will be bigger and better. This will attract a wider range of sailors and our programme will support a great training ground for aspiring worlds competitors.”