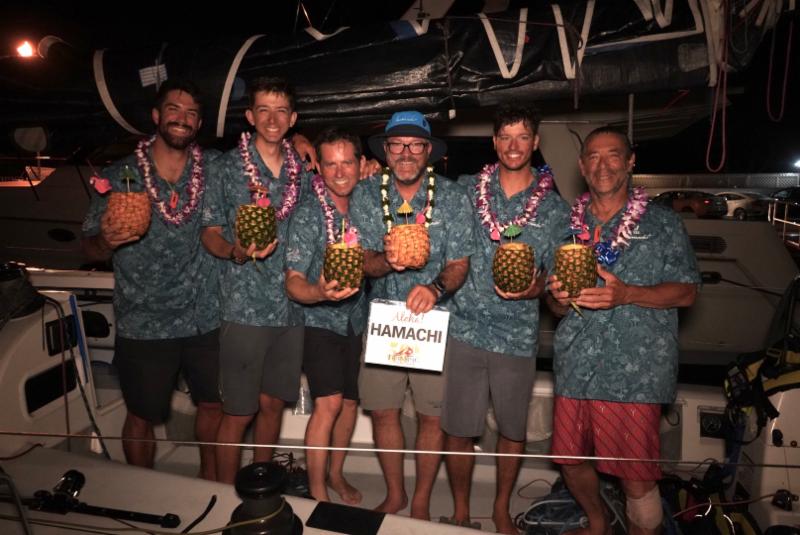 HONOLULU, HAWAII – Mostly favorable weather conditions for this race and the staggered start paradigm has created for the 50th edition of the Transpacific Yacht Race what was intended: a flood of both fast and slow entries converging together on the finish in Hawaii. Some 70% of the 82 entries that will finish in this year's edition have or will have finished between Saturday Noon and Monday Noon, a remarkable high density flood of racers arriving happy, tired, thirsty and wholly satisfied with this year's race.

TPYC race officials say 75% of the entries in this year's anniversary edition are newcomers to the race, but there are a lot of familiar faces on the arrival docks and Aloha parties being held at Waikiki and Hawaii Yacht Clubs. All of them, even among the Division 1 and Division 2 teams deprived of course records and corrected time victories due to their first night of light air, have said this year's race for them was the best in memory.

“From the reports and dock chatter, everyone has been really happy with this race,” said TPYC Commodore Tom Hogan. “We had our fast multihulls even suggesting they start even another day or two later to be more a part of this celebratory Aloha scene.”

Echoing Hogan's assessment, Gordon Kay, a veteran of two Whitbread Round the World Races and numerous other classic offshore races around the globe, was racing as a helmsman on Quentin Stewart's Infinity 46r Maverick. This innovative design from Hugh Welbourn has a lateral appendage protruding from the hull just below the waterline on the leeward side that produces lift to contribute to stability of the boat when at high speeds. Called DSS (Dynamic Stability System) this produces outstanding performance benefits in offwind sailing with wind over 17 knots…below this speed in downwind sailing the foil is retracted in the hull to reduce drag.

These effects were seen in the final approach to Diamond Head today when Maverick was locked in battle boat-for-boat with a much larger race boat with a conventional fin and bulb keel, Max Klink's Botin 65 Caro. The two were neck and neck doing speeds of 17-20 knots en route from the north shore of Molokai all the way to the finish in the brisk wind and waves of the famous Molokai Channel.

“The DSS was amazing, it allowed us to be so fast and so stable, we carried the big A2 spinnaker much further out of its normal range,” said Kay. “We did not want to change to the A3 because we really wanted to beat Caro boat-for-boat, and we did.”

Kay, who is from England, reflected on his experience on this, his first Transpac.

“Everyone should do this race, its like no other, today and last night were absolutely perfect,” he said. “All the elements are here for a truly fun and challenging oceanic experience. I'm 46 years old and have been racing for decades and only now can I finally reflect on how special this is and the amazing opportunities we have as sailors to have experiences like this. For this I'm truly grateful.” Kay then left the Waikiki Yacht Club for the airport to fly to Finland to help commission a new Infinity 53.

Hmmm…Finland? or Hawaii? It's too bad he's not staying because the rest of the Maverick team will on Friday night be awarded a trophy for Fastest Elapsed Time for yachts under 50 feet.

Another design with novel appendages that finished today and paced with boats much larger was Charles Devanneaux's Beneteau Figaro 3 A Fond le Girafon (“the baby giraffe”), named for the ungainly-looking but effective foils that protrude from the hull above the water, but curved to be immersed at high heel angles and thereby also provide lift and stability. Devanneaux double-handed this race with Fred Courouble, a French ex-pat naval architect living in Long Beach, who explained their function.

“The design is very clever. When the boat heels 20-30 degrees, the outer section of the foil is rotated so that its curved section is now at an angle to provide lift. The position of the foil on the boat, the full round bow section, and the leeward rudder which is now vertical all make the boat very stable and hold its tracking, even in high-speed reaching. There boat in these windy downwind conditions is easy to steer and completely under control. In fact, at no time in this race were we concerned about control of this boat, its is very fast and safe,” he said. Devanneaux has already sailed this boat to Hawaii in the Pacific Cup and says he has thousands of miles double handing her in races and offshore passages, without problems.

Besides its immense popularity in France and northern Europe, this boat is also one of many under consideration by World Sailing for approval and inclusion in the next 2024 cycle of the Olympics for the new mixed gender double handed offshore medal.

And while the French team on the Figaro 3 had a fast race, their Wednesday start put them into a weather pattern that prompted sailing south, thereby adding many miles to their trip. In contrast, few would dispute that for this year's race the best weather was reserved for the Friday starters, and sure enough the top three teams in the corrected time standings are from Division 3. Led by Shawn Dougherty's and Jason Anderson's Hamachi, followed by Zach Anderson and Chris Kramer's Velvet Hammer. These two are both J/125's, but had measurable differences great enough to give Hammer a 2 hour 45 minute corrected time margin with their rival sistership.

Yet the Pacific Northwest-based Hamachi team rode a wave of strong tradewinds in their final approach to the finish, crossing the line at 2:21:29 local time, a 44-minute corrected time margin to be clear of Hammer, and almost 2 hours clear of Bob Pethwick's Rogers 46 Bretwalda 3, yesterday's first Division 3 finisher.

So, unless a Cal 40 sprouts wings and flies to the finish, the King Kalakaua trophy looks pretty safe for Hamachi.

“We would be so excited and proud to have our hard work over the past few months get rewarded with this amazing trophy,” said Dougherty. “The team was phenomenal, everyone worked hard but had fun too, and to be given this prestigious award would be quite an honor.”

There is one more casualty on the course among the several others who have retired with various problems in this race and returned to the coast: David Chase's and Carlos Brea's Fast 42 Uhambo reported about 1700 Hawaii time today they broke their mast, but all aboard were okay. TPYC race managers have been standing by, and the YB tracker indicates their speed at 6.0 knots with 100 miles to go.

Meanwhile the finishers will keep rolling in, with the “Tail end Charlie” award appearing ready for either Jason Siebert's Schock 40 Gamble or the Hawaii-based Trader, Doug Pasnik's Andrews 70, both about 500 miles out from the finish.

A continuing steady stream of finishers is expected in the next 24 hours, with the greeting committee on the top deck of the Hawaii Yacht Club bellowing out an enormous “Aaaahhh-looooo-haaaah” for all who enter the Ala Wai Harbor in search of their mooring place, their loved ones, beautiful and fragrant leis, and the coconut mai-tais given every yacht in the race, regardless of their results. This is a taste of the true Polynesian cultural spirit of Aloha that embrace all who visit, especially those who came from the sea.