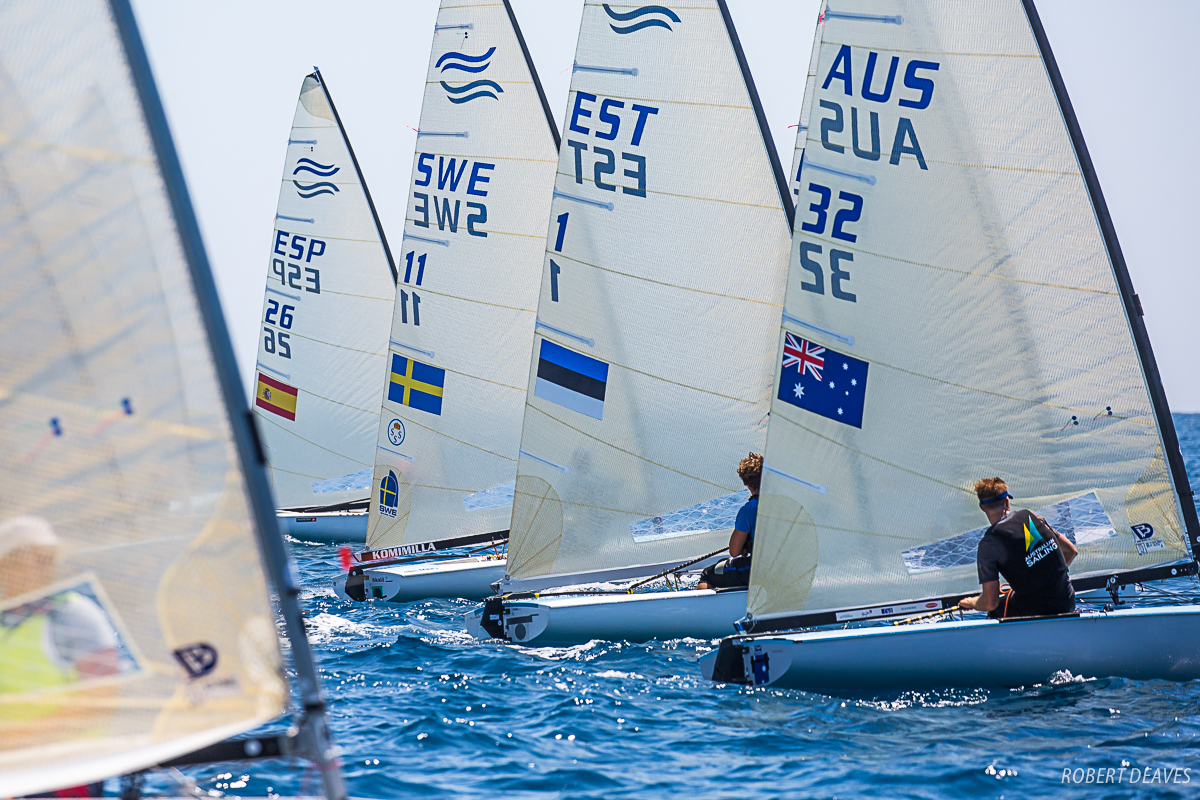 With the pressure off after securing the 2019 U23 Finn World Championship for the Jorg Bruder Finn Silver Cup, a day early, Oskari Muhonen, from Finland, led all the way in the final race to record one of the biggest winning margins of the week. A third place finish from Joan Cardona, of Spain, was enough for the silver medal, while a second place for Nils Theuninck, from Switzerland, was enough for the bronze.

Like Muhonen, Liam Orel, from Slovenia, had already won the U19 gold, while behind him Italians Paolo Freddi and Roberto Rinaldi were fighting for the other medals. Finishing next to each other in the final race, Freddi took silver with Rinaldi taking bronze for a double home medal.

The final race was also sailed in light winds after a short postponement ashore. Muhonen started at the boat end, tacked away to the right and was already clear ahead at the first cross to lead the fleet round in the patchy 5-7 knots breeze and extended almost every leg for a confident win.

He was followed around the top mark by Oskar Adamiak, from Poland, and Mikhail Iatsun, from Russia. Cardona was not far behind and was soon chasing the leaders. With the shifty, puffy and difficult wind, there were many place changes and finally the main contenders emerged ahead with Theuninck just getting the inside overlap on the final gate to lead Cardona to the finish, though a long way behind Muhonen. Top Italian, Federico Colaninno, could only manage 12th, and dropped from second to fourth overall.

Doma Nemeth, from Hungary, towers over most of the fleet but is still under 19 years old. While he wasn’t happy with his results, he said he learned a lot.

“It was a really difficult regatta but for me it was all about learning so I learned a lot.” He joking said, “It was a lucky man’s regatta but the first day was the most fun. It was mostly fun for me and I think all the big guys.”

Likewise, Taavi Valter Taveter, from Estonia, was not happy about his overall position, but took comfort from the races where he performed well.

“I had a rather disappointing regatta. The good was that I had some nice races in. But in general the wind was for a few days OK and on the others it was rather light, but it was still nice to spend it with everyone else over a long period of time.

For Muhonen, it was his second Finn Silver Cup after winning previously in 2017. He still has one more year to go as an U23. No one has won the Cup three times in its 21-year history. He is only the fourth person to win the cup twice, following in the wake of Chris Brittle from Britain, Jorge Zarif, from Brazil and Ondrej Teply from Czech Republic.

“Of course I am pretty happy to win a second time. That was the goal for the week and I managed to achieve it. So I couldn’t be happier and it sets me on good path for the Tokyo Olympics and Genoa qualification.”

“The next year is about big training towards the Genoa event and hopefully get the place there and then go for Tokyo, but in the big picture of not being in for Paris 2024, it’s a big shame for the big young guys that have put the time and money into sailing the Finn already. There are not really any other options for them and it’s just really disappointing.”

He added, “Really disappointed about the Paris 2024 decision because for me and many other guys there are no options any more. It’s really a shame as it’s the end of an Olympic career for a lot of guys. I think it’s really a shame as well as the Finn is the most physical class in the Olympics and all the big and strong guys go after that.”

What is perhaps remarkable among this group of talented, committed, physical and intensely athletic young sailors is that many of them will be going head to head next year to qualify for the Tokyo Olympics. At least nine have a realistic chance and are training full time ready for the final continental qualifiers. All are learning massively from the experience, believing that any time spent Finn sailing is better than anything else they could possibly be doing.

It is what the Finn is all about. It is a classroom for sailing skill and commitment as much as it is a lesson for life skills. No other class offers the kind of sailor development that happens within the Finn class. It’s why sailors rush back after trying other things. It’s why young, big sailors dream of sailing the Finn, emulating the Finn idols across generations.

We keep saying it means something to say you are a Finn sailor. It means something to campaign a Finn for the Olympics. It is a life changing experience that anyone who has not done will not understand. We have heard all week about the sailor’s disbelief and sadness about the dropping of the Finn from Paris 2024. They no longer have a pathway, the pathway they dreamed about when they decided to take up the Finn challenge. Olympic sailing is in danger of losing a generation of young talent.

At some point this message must hit home. That is why the class will fight for its Olympic place and why, like a true Finn sailor on a long beat to windward in 30 knots, we will not give up.