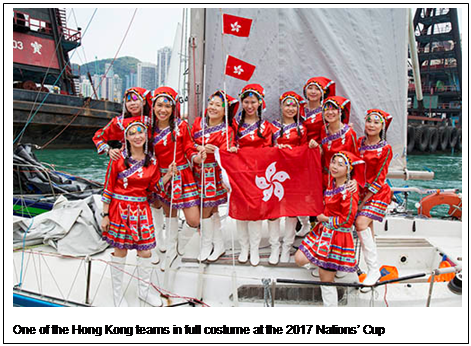 One of the Hong Kong teams in national costume at the Nations Cup 2017. Photo RHKYC/Guy Nowell.

Competitors set out to find blue skies and a varied breeze of 5 to 10knots with Race Officer Lucy Sutro sending racers on a three-loop harbour course between the Central Club buoy off of the Wan Chai Ferry terminal then to Shau Kei Wan(SKW) and back.

Boats were split into five starts based on their RHKATI ratings, with the HKPN rated entries starting first. The last boats to set off were the larger of the big boats including England’s TP52 FreeFire, Orient Express representing Hong Kong, Straight Up yer Kilt representing Scotland accompanied by the sole catamaran to take part in the event Flyer a Flying Phantom representing England.

Most starts were clear with only a few OCSs being called.  Once the horn sounded, national teams beat their way up the harbour with some teams sporting costumes of all types to mark the occasion including kilts, rooster hats, martial arts costumes, and Union Jack blazers.

Once sailors reached SKW they hoisted their kites and ran down to Central buoy where they encountered a disappointing strong outgoing tide and a considerable hole around the mark.  Once they managed to limp their way around, they headed back to SKW.  Due to the considerable hole it was decided to shorten the course by one lap.

Tornado representing Hong Kong was the first to finish on the water with team New Zealand Flying Fifteen Forty Forte taking the silverware and the bragging rights of having their flag displayed over the Main Bar for a year for the 4th year running.