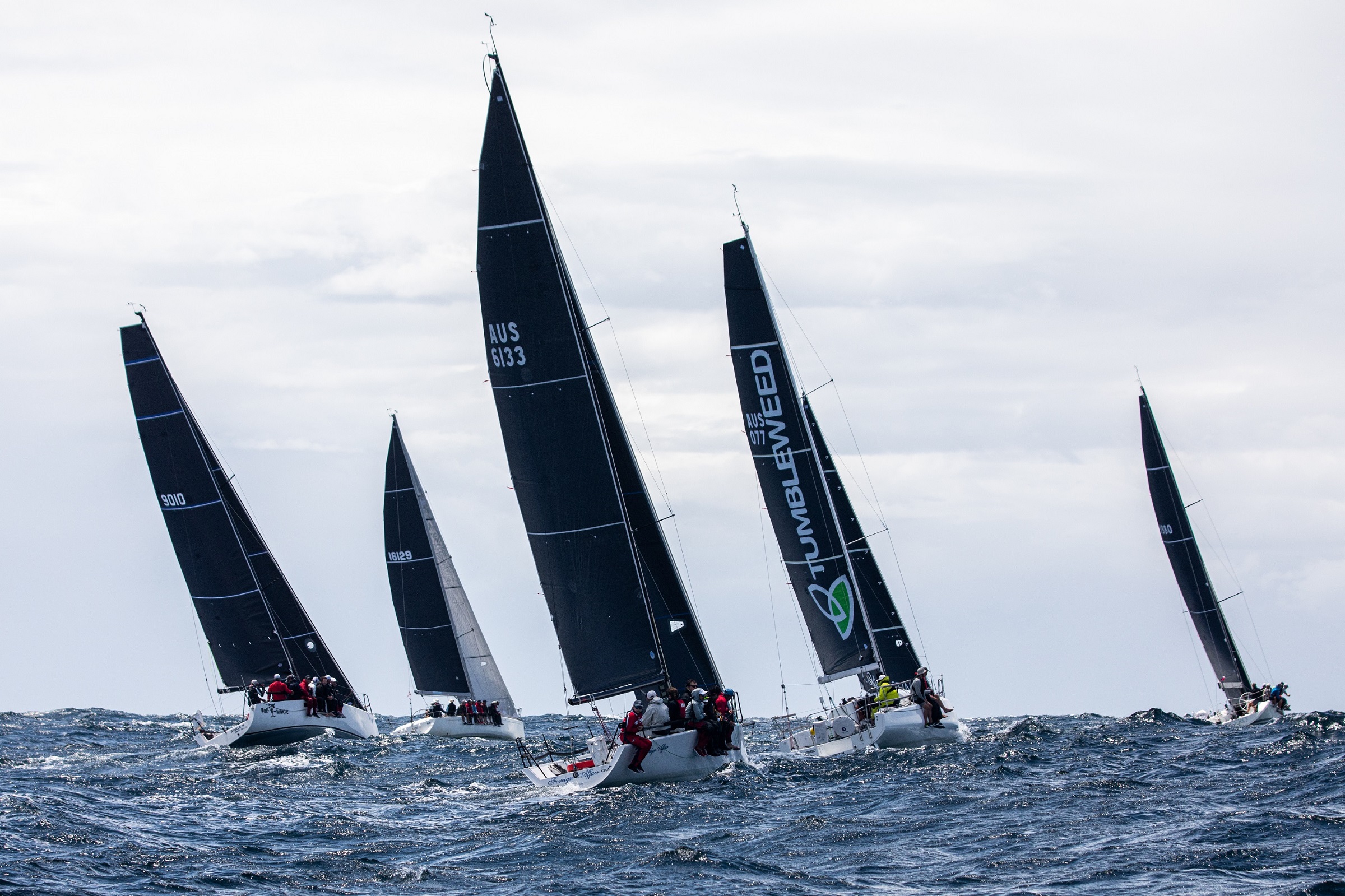 It was a big day offshore for those in ORC Championship and the Sydney 38s, as they faced a messy sea state. The planned three windward/leeward races for the 38s were reduced to two because of the sea and shifty winds.

Overall, going into the final day tomorrow, Bushranger is three points ahead of Soozal, with Mercury (Mark Tinworth and Mark Waterhouse) in third place, a further four points in arrears.

“It certainly was choppy and lumpy with very variable winds of 5-22 knots from the south-east, moving towards the east during the day,” Hatton commented.

“We had a really good start. We went left off the start and that paid off. We reached across the wind to the top mark, then carried a Code Zero to the second mark off Terrigal. That’s where it dropped off to 5 knots.

“Coming back into Barrenjoey to the finish, we carried a spinnaker and had to drop it close to the finish line. It all went well. We have a very good crew who have been with me for years,” Hatton concluded.

A new name came into focus in Division 2 today, when Martin Cross’s Sunfast 3300, Transcendence, took the win. It did so from one of the favourites on the longer offshore course, Shane Kearns’ S&S 34, Azzurro-White Bay 6. Kearns is hard to beat offshore in good winds. Mark Hellyer’s Italia 11.98, Cicero, finished third.

Simon Grosser’s Young at Heart holds onto the overall lead by the skin of her teeth after finishing fourth today. Azzurro-White Bay 6 is second, but on equal points with the leader, with Cicero third, some eight points behind.

For the finale tomorrow, the Championship will take the yachts on three windward/leeward races offshore. Such a variety of racing will decide the best of the best. The three-day ORC Championship is supported by Sydney Marine Brokerage.

Sydney 38 One Design NSW Championship
A three-way tie exists in the Sydney 38 One Design NSW Championship, with Peter Sorensen’s Advanced Philosophy leading the charge – just. Sorensen said this afternoon, “We won the first race, but messed up in the second one. We had a tangle in the mainsheet and did a quarter of the second work with no main on, but we’re going pretty good overall.

“The big surprise was Shine On, which hasn’t been that competitive against us blokes and Conspiracy up till now,” he said.

Racing was close between all seven Sydney 38s, although Herscovics got away from the rest in Race 1, while there was just one second between the top two in Race 2.

Herscovics was thrilled with his results: “We had a great first race and pretty much led all the way round. It was a great start to the Championship. We had solid speed in lumpy conditions. We put a lot into our preparation, and it’s paid,” he said. “I have good people on board too, who are working well together, and that’s what it’s all about.

“We were doing well in the second race until a shackle came off the clew during a spinnaker hoist. We had to drop and re-set and ended up third. It was very exciting in Race 2; just seconds in it.

“There are great people in the class with good camaraderie. The more 38s we can get to these events, the better. The racing is so good,” he ended.

Liz Charles, for the first time sailing with an all-female crew on Calibre (chartered by the Sydney 38 Association for the ladies), had an excellent day, finishing sixth in Race 1 and fourth in Race 2, to be fourth overall.

Pittwater Regatta
On Day 1 of the Pittwater Regatta, sailed inshore in much calmer conditions, one boat stood out in Division 1. Heath Walters (Banta) opened his campaign with a pair of wins to hold a four-point lead over Revolver (Michael Ritchie), while Pacesetter (Andrew MacPhail) is third overall in a tie situation with Revolver.

In Division 2, Chris Hornsby (Pick Pocket, a Garry Mull design) emulated Walters, pulling out two victories for a lead over Vittoria (Alan Reece) which ended the day with a pair of second places and James Pattinson’s Ellipse II, a pair of third places in her tally.

“We got two very good starts. Basically, the crew, including my wife Julia, and the two Johns worked very well. We had good clean spinnaker sets and drops. Good to have boats from the other clubs there too. It was challenging, with either little or two much wind. Typical Pittwater weather,” Hornsby said.

“The wind varied from 30 to 40 degrees and ranged from 10 to 20 knots. It was hard – especially the second race – we had to run a shy spinnaker,” said Hornsby who owns the smallest boat by far in the Division 2 fleet.

The Pittwater Regatta entrants will sail two more inshore races tomorrow to decide the winners and the Hornsby’s say they are looking forward to that.

For all information, including full results, please visit the official website: https://rpayc.com.au/pittwater-regatta-inc-nsw-orc-championship-2022/