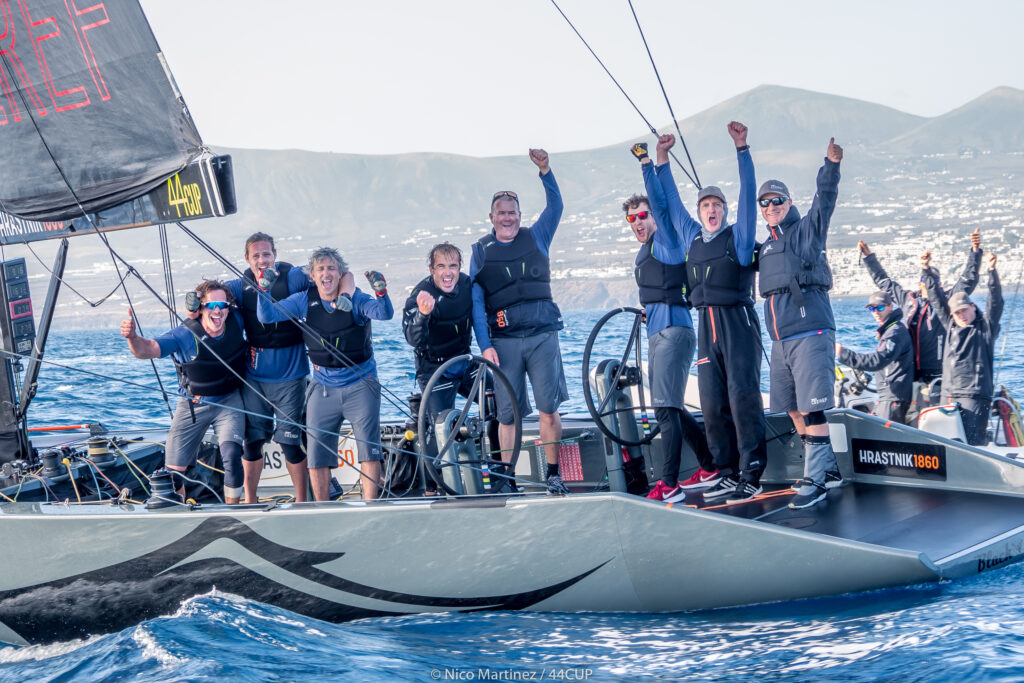 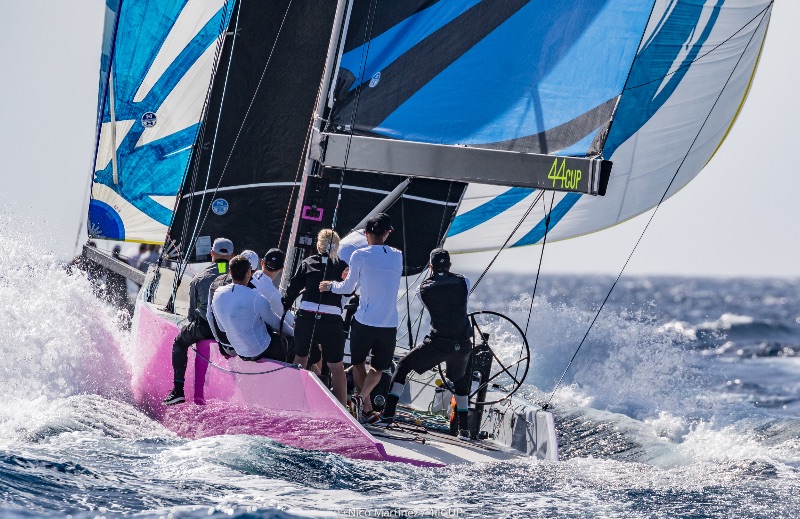 The wind strength increased throughout the day. Pic - Martinez Studio 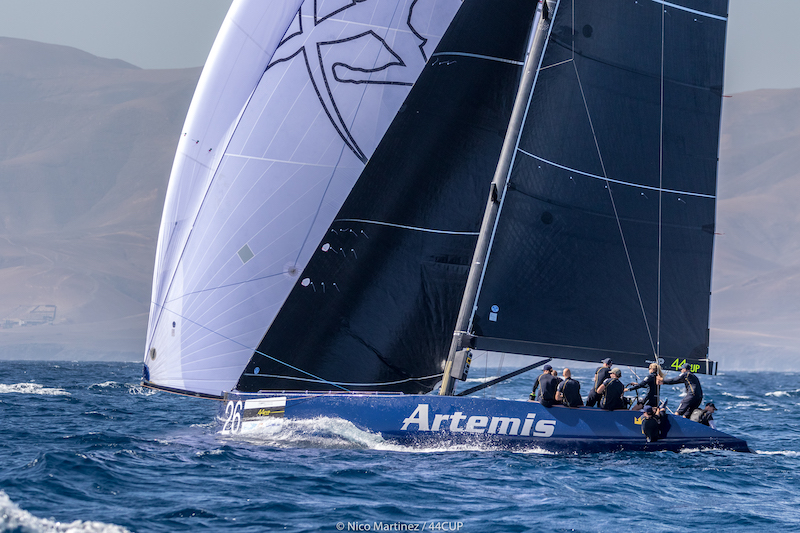 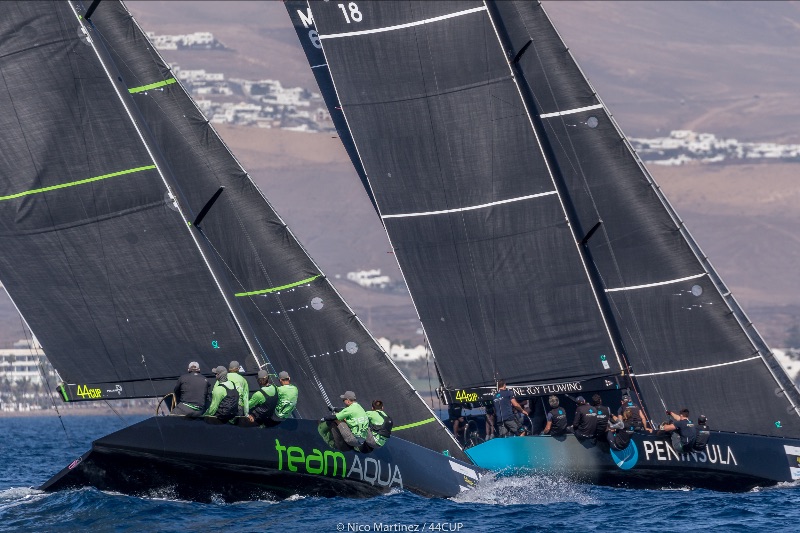 Going into the final day of the 44Cup Calero Marinas in Lanzarote, Igor Lah’s Ceeref powered by Hrastnik 1860 held a strong 11-point lead.

Normally this would have seen them packing their bags early, having won with a race to spare. However this is the 44Cup, home of high performance one designs and owner-drivers surrounded by Olympic medallists, America’s Cup and Volvo Ocean Race winners and nothing is ever certain. Ultimately the Slovenian team did win here in Lanzarote, but for several tense minutes victory seemed to have slipped through their fingers.

Today’s three races took place in a moderate easterly that built during the second race into the high teens.

In the first race the new boys on La Pericolosa won the pin and dug left, enabling them to reach the top mark first. Down the run they were being hunted by Pavel Kuznetsov’s Atom Tavatuy and at the gate they split, going left. On the second upwind Atom Tavatuy benefitted from a big right shift and gained a strong lead going into the top mark. While the Russian team comfortably secured their second bullet of the event, there was a scramble for second with Vladimir Prosikhin’s Team Nika sneaking in ahead of La Pericolasa.

Finally in the second race Nico Poons’ Charisma came good. They had led yesterday’s first race until having to recover a man overboard. This afternoon they redeemed themselves. As stand-in tactician Vasco Vascotto described it: “We started well, nicely at the pin and we went left, which we believed was correct. Usually there is a little band of wind there and today there was less current too.” They rounded the top mark first and then hung on, despite a charging Team Nika that finished a close second. “That was one small sweet after a very bitter week, but this is the RC44 class! If you are not consistent you are at the back.”

Competitors were thinking about the overall results. After a sixth in the first race, Ceeref’s margin over Team Nika was just six points. This dwindled by three more in the next. Going into the final race Ceeref’s lead was just four points over Team Nika. At the start disaster struck when they were locked out at the pin, gybed and ended up starting very late. Meanwhile Team Nika played the shifts well up the first beat to lead around the top mark ahead of Valeriya Kovalenko’s ARTTUBE and Atom Tavatuy. Prosikhin’s team consolidated and went on to take the win comfortably.

Behind them a yacht racing masterclass took place as tactician Adrian Stead, Lah and the Ceeref crew fought back. By at the top mark they had recovered to eighth, by the leeward gate were sixth and after a stunning second upwind rounded the top mark second, which they held to the finish – enough to secure them 44Cup Calero Marinas victory.

“We wanted to keep some drama in! But I am relieved,” said Lah. “It is great to win the first event in the season. It is always like this in this class – you are never sure of anything.”

Stead continued: “All credit to Team Nika – they have been sailing well all week. We can definitely say this regatta was won by the recoveries – how many boats you could pass.” Team Nika had performed a similar feat in today’s first race, after their OCS. “The team did fantastically well and we kept believing in what we were doing, which is the key. I would say this is the best racing we have had in this class.”

Today’s stars were certainly Team Nika, posting a 2-2-1. “We’ve started to sail downwind much better so we have been gaining upwind and downwind,” explained Prosikhin. “It was difficult, but very enjoyable. I loved every moment of it.” Of the last race he added: “I looked back only approaching the finish line. Unfortunately the first thing I saw was Ceeref – the only disappointment of the day!”

Half of the Team Nika crew are new for 2022 and Prosikhin paid special tribute to tactician Francesco Bruni. Bruni said that there had been more passing lanes today. “It was less stable with at times more pressure offshore. We sailed very well. This crew finished last season in a low moment and they needed a recovery. Here we had more practice, which really helped. Vladimir is really following my leadership of the team.”

Torbjörn Törnqvist’s Artemis Racing finished a solid third having won races on the first two days.
Trying their hand at RC44 racing, were the former Melges 32 champions on La Pericolosa, who led the fleet at the top mark at least twice. “It has been really good,” said British tactician and former 470 World Champion Nic Asher. “We have loved the boat and the class is really nice, welcoming, everyone has been giving tips and advice all week.”

Over the course of the 44Cup Calero Marinas’ 10 races, incredibly seven boats won races and after just six races, all 10 teams had podiumed.

For the full results, see: https://www.44cup.org/results