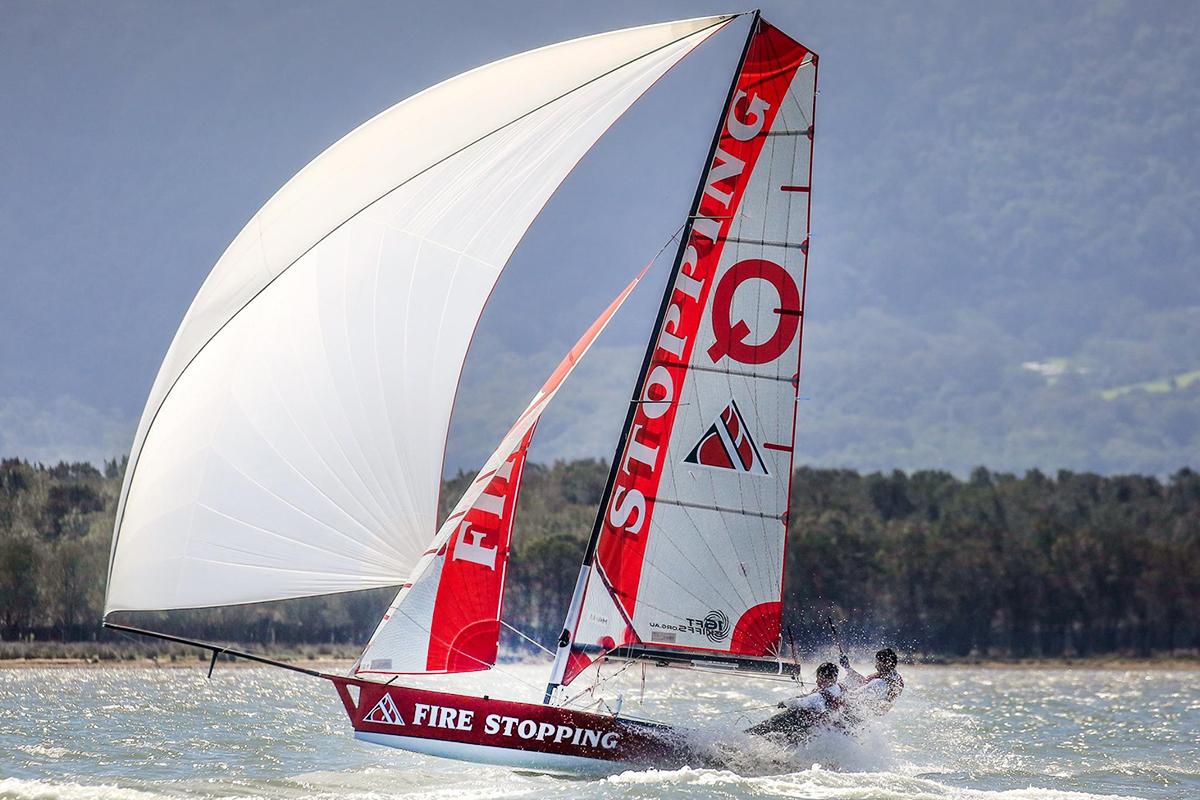 Talk of NSW entrants dominating the Australian 16ft Skiff Championships at Port Stephens from January 4 has a quietly confident Queensland contingent relishing the prospect of taking underdog status into the state-of-origin battle.

Fresh from winning the recent Queensland State Championships aboard Fire Stopping, the crew of Trevor Koreman, Frazer Smith and Daniel Jack believe they’ll feel right at home on the waters of Port Stephens, which has parallels with Darling Point Sailing Squadron’s race track on Moreton Bay.

It’s where a fresh nor’easter and tricky swells tested their crewing skills and boat speed in the final heat of the QLD States. They prevailed over the well-sailed Data 3 and RW Retail respectively, both of whom are also making the trip south for the nationals.

“We haven’t done a great deal of sailing lately but we’re definitely picking up our boat speed again,” said 21-year-old skipper Koreman. “We finished seventh last year at the Australian titles so we’re hoping to go as well, if not better, at Port Stephens if it blows above 15 knots.”

Thrills and spills are certainly predicted for Port Stephens if and when the seasonal nor’east seabreeze meets a run-out tide on Salamander Bay. That said, the NSW Championships were also no walk in the park.

They, along with Koreman Marine Composites (Felix Grech) and Tooheys Extra Dry (Henry Makin) are tipped to be leading contenders for nationals.

Rod Carter, a school teacher and sailmaker who steers Southern Beaches Rugby (SBR), is eyeing another top-5 finish after a consistent performance in the States held at both Belmont and Drummoyne.

“We were one of just two crews who only had top-10 finishes,” Carter said. “I’ve got Adam Gilson on sheet, who’s been with me for a number of years, and we’ve added Andrew Stone to the bow – he has provided the X-factor.”

While SBR is a 15-year-old Munster design that Carter has campaigned for eight seasons, it remains cutting-edge in terms of rig evolution.

“We’ve designed all our own rigs and they’re a bit different from the conventional set-up,” Carter adds. “We’re the only boat running a forward-facing prodder and were one of the first boats to go with a square-topped jib.”

“There are times when we feel like we’re the fastest boat on the water, and I reckon Port Stephens will suit our crew work and hull shape. It’s a bit finer in the bow, which might give us an edge over the newer Chinese-built, ASSA-supplied black boats.”

Asked to name his main rivals, Carter lists IMEI, Sutech and Brydens but admits the Queenslanders could be dark horses.

“They don’t have the fleet size to get the quality of racing week-to-week, but Fire Stopping and RW Retail are the form boats. They’ll be quick, given the right conditions, and more than capable of getting a few good results.

“Also, our sheethand is the Vice-President of the Association and the President is a Queenslander, so it will be good to get one up on them. But it’s all good rivalry, mateship and competition at the end of the day.”

To celebrate the class’s proud history of comradery, an “old boys” day will be held on Friday, 10 January, where ex-skiffies can watch the afternoon racing, pick every shift from the balcony, reminisce and tell the new breed how they could improve.

Young guns will also be out in force as the national titles also includes the 13ft skiff class, a feeder for the 16ft skiff fleet. A step up from the 29er, the boat is truly a youth’s weapon capable of up to 20 knots downwind and sometimes even matching the 16ft skiff.

The Australian 16ft Skiff Association is expecting a fleet of fifty 16ft Skiffs and fifteen 13ft Skiffs to compete from 4-11 January 2020. Port Stephens Sailing and Aquatic Club will host nine races with two drops, up from a 7-race series with one drop as in previous years.

The Notice of Race and online entry forms can be found at skiffs.org.au or by emailing secretary@skiffs.org.au.