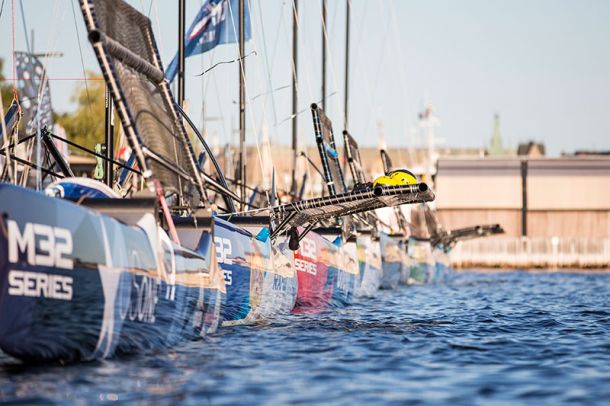 With the entire season at stake, the first day of the M32 Series Scandinavia finale in Stockholm, Sweden dawned with picture-perfect weather… for fishing.  Glassy water and North-easterly wind from zero to three knots meant a challenging day for sailors and race officials as the double-points season finale began.

Despite a long, tough first season in the M32 Fleet, series backmarker Michael Hestbaek (Hydra Racing Team) jumped out to a huge lead in the first race of the day after a near-perfect start, extending around the course to a nearly 3-minute pasting of the fleet in the light air race.  “We’ve definitely found the conditions we’re fastest in,” said Hestbaek.  “Now we need to perform in all the other wind strengths.”

After a long delay for the wind to return to the Norr Mälarstrand river in the heart of downtown Stockholm, it was Southern Swedish America’s Cup vet Martin Strandberg (Alite Racing Team) hitting the starting line exactly on the button while series leader US-One and Denmark’s Trifork Racing were called over the line early.  Strandberg said his crew has been concentrating on getting the starts right. “It’s obviously the most important part of the race, and if we can start like this all week, we should do well in the results.”

Early season standout Nicklas Dackhammar (Essiq Racing) seemed to have regained some of his mojo after two bottom-half results in Copenhagen and Helsinki, with the young Swede in 2nd place after two races. “We feel we’re back on our game, and we’re looking to continue to stay consistent and smart for the rest of the week,” said tactician Arvid Bildh.

US-One looked less like the undefeated champion of the M32 Series today, with two bad starts and numerous missteps around the course, but the young American remained confident about his crew’s ability to overcome.  “These races were just not fun at all, but two races is nothing, and tomorrow is another day.”

Racing begins at 1400 CET tomorrow with the full live pre-show broadcast starting at 1330 CET/1230 UTC and up to 7 races following immediately thereafter.