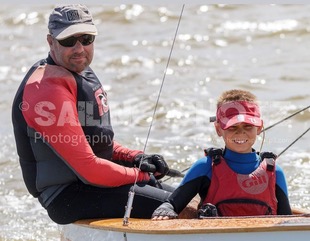 The 61st National Heron Sailing Championship was contested at Lake Cootharaba, just north of Noosa, on 28 December 2019 – 3 January 2020, in an eight-day regatta.

The Jack Holt designed Heron is a two-person dinghy sailed in all states of Australia. The unique trait about the Heron class is that it’s ideally suited to an adult and child combination of skipper and crew, meaning that often parent and child sail and compete together. Usually in sailing parents are watching their child compete from the shore or from a pick-up boat, but in this case, families compete and work together as a team.

Herons are a nostalgic sailing class with over 70 years of history in Australia. Many sailors who start out in Herons as kids, move on to other classes in their late teens, and return to the Heron to get their own children started in sailing. Herons offer safe affordable entry level sailing for novices and also provide an ongoing challenge for experienced sailors who are seeking to optimise their performance. The Heron has a long and proud history of family involvement, many of the National Championships have been won by parent/child skipper and crew combinations.

There was a great show of girl power in Heron sailing this year with 11 women skippers and a total of 38 female competitors (skippers and crews) in the regatta.

Ideal conditions at Lake Cootharaba were enjoyed by a fleet of 55 Herons;  24 Qld, 20 NSW, 5 Vic, 3 SA, 2 WA, 1 ACT, all adding up to 110 competitors and their extended families, from all over Australia, enjoying plenty of strong competition and fun, on and off the water.