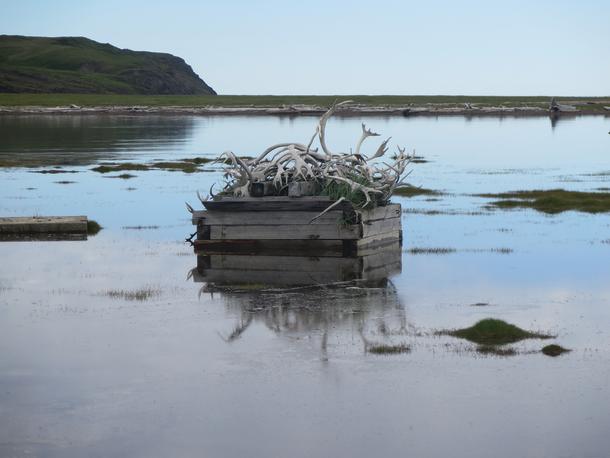 Abel Tasman is a 23 metre Bermuda schooner derived from the elegant lines of America 1, which was designed by George Steer. With her clipper bow and tumblehome sides she was built in 1981 in Westerbroek, Netherlands and is now skippered by Antarctic and Arctic expedition support vessel operator, Roger Wallis. Abel Tasman’s steel hull is ten millimetres below the waterline and 8mm above which makes her ideal for passage making in high latitudes.

We are waiting out a 30 knot easterly headwind in Austin Bay, tucked behind Cape Lady Franklin on the southwestern end of Victoria Island in the Beaufort Sea. Abel Tasman lightly snubs at her anchor one nautical mile offshore. It is blowing and doggedly choppy but AT’s 23m hull straddles three wave tops in one go, so we are ‘comfy as’.

Victoria Island is low lying, a mere smudge ashore; brown, desolate and barely discernible. There is no real lee in this scooped out bay but it is a happy alternative to bashing 180nm to windward to Cambridge Bay through the not-entirely ‘sounded’ and island-littered Coronation Gulf.

So far, we have had 24 hours of light, but tonight, at 68° 31’N 113° 05’W, it is almost dark at midnight. The days will shrink noticeably from here on. As I have experienced in Antarctica, departing daylight in high latitudes is perceptible with each passing day.

The biting wind hums constantly through the rigging in the half-light of this Arctic summer midnight. Stranded anywhere outside the comfortable coziness of the warm cabin, heated so snugly by the Dickson diesel oven, we would be done for. What a complete haven this steel hull is: we are tortoise-like, retracted within our shell waiting for the wind to exhaust itself outside.

You do not have to travel to the Arctic, but its remoteness and barren landscape is a tender reminder to know how important this ‘keeping in touch with your boat’ business is. It is all that separates us from exposure, pain and death.

On a night like this, in a place like this, I cannot help but contemplate a history of ships and sledges, so full of drama, hardship, long-winded exploration and discovery, fame and fortune, life and death, successes and mistakes, natives and Europeans, suspicions and superstitions and all the delays and difficulties that complicate and compound problem after problem.

The finding of the North West Passage was a monumental historical battleground between the forces of polar nature and human endeavour. The history of this place sits in your mind as solidly as all the chaotic bits of land that are strewn indelibly across the Arctic chart.

From Nome to Austin’s Bay we have cruised another 1,617nm; through the Bering Strait, Chukchi Sea, Beaufort Sea, Amundsen Gulf and Dolphin and Union Strait.

I had been anticipating the rage of the narrow Bering Strait for weeks. I expected more stodgy fog and bucking into a chilling Arctic northerly, opposing a north setting current. Instead, we had come to the Arctic to find sunshine at last and a tranquil sea. As if the sea had been coated with oil to poleaxe any protruding ripple or wave.

The birds of the Bering Sea were having a rest day, all taking a ‘breather’, barely bobbing on the surface. Only their heads turning in unison to casually observe our progress past.

The only birds to rouse, in their usual tizz, were tufted puffins with kinked head feathers signalling nervy natures and full-tummy remorse as they wrestled with butterfly strokes only to gawkily trip and face plant forwards.

Things change quickly beyond the Arctic Circle. After a brief nap, our world felt odd as I emerged through the companionway. We were encased in an open-topped dome of fluffed-up fog spookily ghosting into cold air nothingness. Some weather god had left the freezer door open and we were full frontal in its draft.

Beyond the dome’s open top was a cloudless blue sky. Before ‘it’ materialised: a morphing fogbow, a colourless rainbow with the cylindrical definition of an artist’s softest pencil. The cold draught seemed to have gathered up the whitest finest fog and wound it in a silkworm frenzy to create a glowing mutating arc. As the bow plunged into the sea lustrous pedestals appeared to anchor its ‘ephemeralness’ in position.

The Bering Strait and its 44nm girth between nemesis nations, Russia and the USA, was divided by a pink dotted line on the chart. Dissecting its way between Big Diomede Island on the western Russian side and Little Diomede Island, 2nm to starboard on the USA side.

Native inhabitants of both islands are related but ‘border control’ disallows their movement between the islands. So there sums up the psychosis of world borders: two related islands full of relatives in a foisted standoff in the Bering Strait.

Through to the Chukchi Sea, affectionately known to us as the ‘chunky sea’, that marked the beginning of our route through the Northwest Passage that connects the Pacific Ocean with the Atlantic Ocean north of the American continent. A cursory note in the Admiralty Sailing Directions reminds mariners that any vessel rarely attempts a through passage because of the shortness of the season and unpredictably of ice.

Alas, climate change has altered this published scenario and, this season, Abel Tasman is just one of a dozen boats navigating the passage. We have, so far, seen only a few ‘bergy’ bits when the water temperature dropped to four degrees.

The Chukchi Sea was the greenish muddy colour of the mangrove tropics pretending to be shallow, which it is not. Other things were amiss, our magnetic compass became sluggish and we were beginning to experience magnetic storms (anomalies) altering the existing variation by as much as 15 degrees.

We passed Icy Cape, Captain Cook’s most northern landfall where he reached the pack ice at 70° 44’N. He reported, in the early morning mist, that they had encountered a wall of ice about 12’ high stretching from horizon to horizon.

Then past Prudehoe Bay where Captain Bob Bartlett’s Karluk sank in winter (10 January 1914) and the shipwrecked party drifted off on an ever-shifting ice pack. Bob knew that they would slide westward and circle the North Pole until, some years hence, they would emerge somewhere in the Greenland Sea, but be dead upon arrival!

nd to collect his patient crew. Some of his crew, former members of Shackleton’s 1907-09 Antarctic men, got the dumb idea to leave Captain Bob’s Arctic expertise and make their own attempt to get to Alaska via the mainland. Bob astutely noted in his log that they were more used to the level Antarctic plateau and not the chaos of the Arctic.

On this windy night of writing in Austin’s Bay, I can picture the high-pressure ridges and impassable debris, their sledges breaking, their dogs getting weaker, frostbite thwarting every effort and their eventual evaporation from life.

So we continued to slide past the Arctic’s low lying coast, backed by plains of rolling tundra, leaving historical episodes and tragedies in our wake. That is what I’m discovering about the Arctic, it is more about the human history than the landscape or the knowingly wary wildlife.

Antarctica’s landscape is glorious, its wildlife visible and confident, almost habituated, from lack of fear and predation. But nothing quite compares with the Arctic’s passages of discovery that track like sinews through its tortured tessellated surface.

When the fog lifted, there, off our bow, was motorbike helmet-shaped Herschel Island or Qikiqtaruk. There is always something mesmerising about sailing along a coastline after days of horizon gazing.

The island was treeless with eroding edges from storms and rising sea levels. Erosion was in action as chunks of black cliff slithered onto narrow beaches strewn with current-borne driftwood. Ribbons of solid sea ice also twisted down the cliffs to the shore. Through binoculars we saw caribou, muskox and bowhead whales.

On the southern side of Herschel Island was the old, once flourishing, whaling station on a narrow peninsula barely above sea level. We were welcomed ashore, alongside buildings deeply etched by the weather, by Inuit park rangers Sam and Shane, who invited us to have a look around after a tour through some of the buildings containing natural history and artifacts.

We hiked across a wet spongy tundra, a sort of bonsai mangrove swamp, to visit hillside graves marked by whitewashed wooden slabs and crosses and names fashioned and fastened in metal to withstand the weathering of time.

Along the way we passed an Inuit ice hut in a mound of earth where meat and fish are stored at -25 degrees Celsius (-14° Fahrenheit). From the graves we could hear and see Beluga whales feeding along the pebbly foreshore with a fine view of Abel Tasman anchored in Pauline Cove (Ilutag).

A twin Otter plane landed while we were ashore. A lucky day for one of the visiting Inuit elders who had been butchering a freshly killed caribou and had accidently stabbed himself in the thigh. He had lost a lot of blood by the time we helped raise him in a stretcher onto the plane.

The sun was shining so I went for a swim in the Arctic, encouraged by a shore side sauna shack with a wood fire warming its interior!

There are a lot of miles to make, nearly 3,000nm, through the North West Passage. So we up-anchored to cross MacKenzie Bay to Tuktoyaktuk.

We were in the company of single and small groups of Arctic Bowhead whales, first seeing their V-shaped blows from the widely spaced blowholes and then black flukes as they dived. It was not surprising to find them here as they feed on the surface in deep water and near the bottom in shallow water.

There was lots of shallow water coming into ‘Tuk’ as we navigated in as little as 1.9m while following channel markers and leads into this low-lying town broken only in height by fissured frost mounds called pingos (good name for a husky) that can, amazingly, reach heights of up to 90m. Not all pingos are permanent features so these significant structures are not shown on charts.

We cleared customs into Canada in ‘Tuk’, a patchwork township of small colourful houses atop stilts. ‘Tuk’ apparently only has a couple of days of good summer weather and we struck them, it was 17°C in and out of the khaki coloured water.

From ‘Tuk’ we steered east to Smoking Hills where we anchored off a random section of coastline that spewed smoke from its sloping sides. A rainbow palate of pebbles created a colourful beach merging into somber ashen smoking slopes that have burnt continuously for centuries as fires automatically ignite from sulphur rich lignite deposits.

Rounding Cape Bathurst we left the Beaufort Sea for the teal green water of Amundsen Gulf followed by Dolphin and Union Strait and our Austin Bay shelter.

Two days later the wind has moderated and the sea has followed suit, as it always does. So on we go, on a perfect shy reach right on course to Cambridge Bay where we hope to get to the bottom of why we have been passing dozens of floating dead ducks! ≈