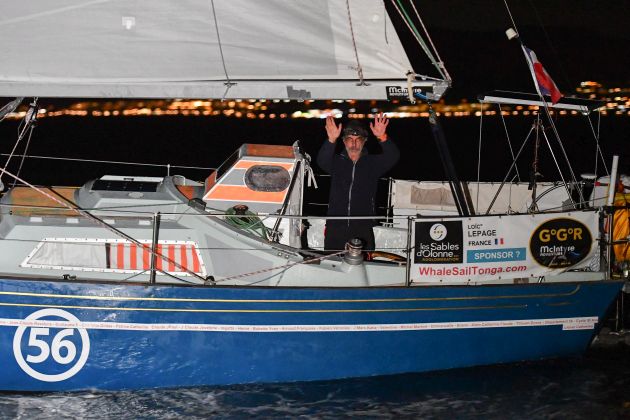 French solo yachtsman Loïc Lepage is expected to be evacuated from his dismasted yacht Laaland shortly after first light on Tuesday (23:30 UTC Monday). By then both the bulk carrier Shiosai and the sailing yacht Alizes II will have reached Laaland’s position in the South Indian Ocean some 670 miles SW of Perth Western Australia, and will await the arrival of an Australian P-8A search and rescue plane overhead before starting the rescue operation.

The forecast for the region is good – 15-20 knot winds and a 3 metre swell. The primary plan is for Lepage to be recovered from his liferaft tethered on a long line to his dismasted yacht, by a boat crew from the bulk carrier Shiosai. Francis Tolan, skipper of the S/V Alizes II, a Beneteau Ocean 43 competing in the Long Route solo circumnavigation will provide backup. If conditions prove adverse, then the MV Shiosai may provide a weather lee for Alizes II to conduct the transfer instead.

Lepage has been fully briefed by GGR Organisers and will evacuate wearing his survival suit and carrying a second EPIRB on standby, VHF radio, personal location beacon and his grab bag. He has set up a bright strobe light on deck and rigged his Echomax inflatable SOLAS radar reflector 2 metres off the deck.

The 62-year old Frenchman from Vannes has also cut away all rigging so that there are no water hazards around the yacht, and has his engine ready to start should he be called to manoeuvre his boat. Both Satphone and VHF radio are on standby for incoming communications.

The Australian P-8A search and rescue plane will remain on station until the evacuation has been completed.

In a satphone call to Race HQ today, British skipper Susie Goodall spoke for the first time about a ‘horrendous’ few days when her Rustler 36 yacht DHL Starlight was caught in a horrific Southern Ocean storm some 250 miles south of Cape Leeuwin, Australia.

The storm developed just as suddenly and with the same ferocity as the one that led to Gregor McGuckin and Abhilash Tomy being rolled and dismasted two weeks ago. “The storm really kicked in between 9pm and 9am. I had 70 knot winds and 13 metre seas. They were nasty… practically vertical with breaking crests. I don’t know how we got through it. My self-steering broke and I had to hand-steer for 7 hours. We suffered several knock-downs and I feared that we might get rolled at any time.”

Susie explained that everything was soaked through above and below deck including bunk cushions and her sleeping back. “I definitely lost some weight during the storm because I couldn’t leave the helm to eat and I am now constantly cold and can’t get warm.”

Her hands suffered particularly. “I’ve never had such soft hands,” she joked, adding “They are not a pretty sight. They are covered in sores and cuts, and now taped up to keep the salt out.”

With the storm closing in around her, Susie took the decision to turn round and head back west and get herself in the better sector. She didn’t escape the big winds but at least she had them hitting her from one direction only before passing overhead. What did for McGuckin and Tomy were the countering seas caused by the winds swinging through 180°. As a result, Susie may well boast that she is the first solo sailor to have passed by Cape Leeuwin three times during a circumnavigation! “I’m just glad the boat is still going,” she admitted

The storm has now passed but left an ugly sea, making it impossible for the moment to repair her wind vane self-steering. “It’s working but not very well. It will only hold a course on a beam reach, so I am having to hand steer with little sail up at the moment.”

With 1,000 miles to go to the Boatshed.com Hobart film drop, Susie is predicting an ETA on November 1st.

Russian skipper Igor Zaretskiy sailing the Endurance 35 Esmeralda, now trailing at the back of the fleet, almost 6,000 miles behind race leader Jean-Luc Van Den Heede, was forced to spend 4 hours at the top of his mast, repairing a forestay fitting. In a message to his team, he said “I thought I might die because the waves were breaking over the boat.”

On his return to deck Igor reported that he had lost all feeling in his hands and feet and has since been resting up in his bunk. That explains his very slow progress in recent days, but the Russian says that he is now looking forward to get sailing again and today’s tracker plot shows Esmeralda making 4.3 knots in the right direction again.

Both he and 7th placed Australian Mark Sinclair (Lello 34 Coconut) have some catching up to do even to beat Sir Robin Knox-Johnston’s relative position in Suhaili 50 years ago. The Tracker now shows Suhaili as being more than a day ahead of them.

Jean-Luc Van Den Heede sailing the Rustler 36 Matmut, is now well out in the Pacific, enjoying a 2 week lead over 2nd placed Mark Slats (Ohpen Maverick) who left the BoatShed.com Hobart film gate behind yesterday. Speaking via Satphone to Race HQ today, the 73-year old Frenchman reported “Good winds today and yesterday… I try to go as fast as possible.” He made repairs to his gennaker and was full of praise for his Hydrovane self-steering. “In a gale it has a big advantage because it is not steering the boat’s rudder, but has its own. This little rudder is far more efficient than the big rudder.”

The next GGR skipper to pass through the BoatShed.com Hobart film gate will be Estonian Uku Randmaa (Rustler 36 One and All). His current ETA is Friday 26th October, followed by Susie Goodall on1st November.