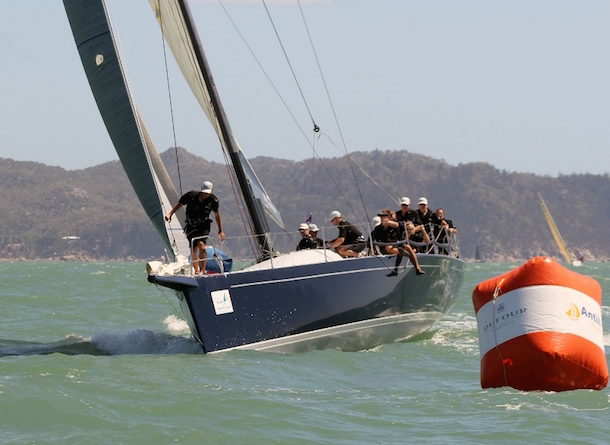 The Cruising Yacht Club of Australia skipper commissioned a new Mark Mills designed MAT 39 footer which has been built in Turkey and will be loaded on a ship tonight. It’s a considerably smaller Quest than the TP52 he used to contest and win the IRC trophy at the 2013 SeaLink Magnetic Island Race Week.

“At my age I should be getting something like a 70 footer now,” a jovial Steel said.  He has however settled for a smaller, but still competitively rated boat.

“I wanted something in the twilight of my racing career. The TP was up to 15 crew which was a lot of organisation. Campaigning a boat of that size and the engines they require, that is the sail inventory, you can imagine how expensive that could be. So now it’s about moderating my costs and being astute and appease the people who make all the decisions, that is the girls in the house,” he added.

With his previous boats Steel has completed a long list of races and regattas including 20 Sydney Hobart races, two of which he has won, and represented Australian in overseas regattas. He now has his sight set on completing this year a neat package of the three northern regattas and achieving some race success as well.

Quest should be landed in Sydney in time for it to be put on a truck to Airlie Beach where it will be tuned up during that regatta in readiness for the Australian IRC Championships during the Audi Hamilton Island Race Week.  Steel will then travel just a short distance further north to his favoured Magnetic island where he knows the racing is competitive, the wind will be warm and the shore-side activities just what he and his team want to have on tap.

“I enjoyed immensely my time at Magnetic two years ago. It’s a sensational venue for families. I enjoyed the intimacy of the venue, just walking from the yacht to the deck, having a beer on the way to the restaurant, then straight into your room. How good is that ? And the weather is perfect,” Steel said.

He will be bringing with him a crew of what he describes as “mature” sailors with an average age Steel is unwilling to reveal. “I think they will represent the oldest average age for a racing yacht in probably world history. Between them they will have completed hundreds of Hobarts. We just might need to use that ramp (from the dock to the bar).”

Steel is looking forward to some good IRC division racing at Magnetic Island. He already knows David Currie’s modified Farr 40 Ponyo will be there along with Leon Thomas’ Guilty Pleasures and Wayne Miller with Zoe, and he hopes other IRC boats from down south will also join him at Magnetic Island.

Under the management of PRO Denis Thompson, racing across the IRC, PHS, Cruising with Spinnaker, Cruising Non Spinnaker, Classic Yachts, Multihulls Racing, Multihulls Cruising divisions will be held from August 27 to September 1, 2015.