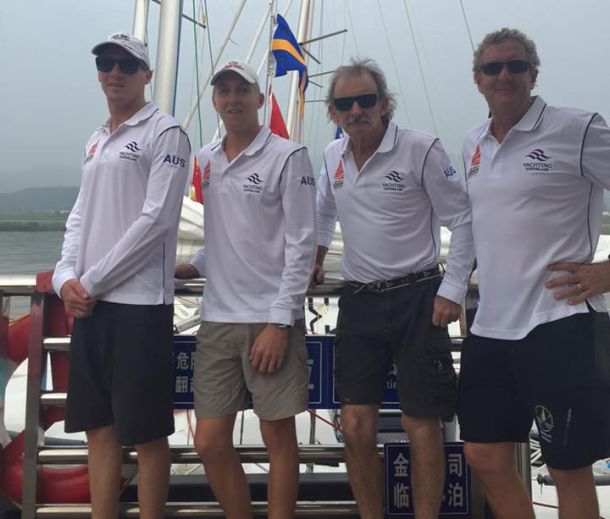 Recently Sunshine Coast sailor, Seddon Cripps, and Yachting Queensland (YQ) Executive Officer, Ben Callard, invited Noosa Yacht & Rowing Club Sailing Manager Paul Blundell and Sailing Coordinators Klade Hauschildt and Hayden Johnson to join them on a tour of China and Hong Kong and meet with the Chinese Yachting Federation and Hong Kong Yacht Club with a view to showcasing the benefits of training in Australia and inviting members of their respective High Performance (HP) Youth Sailing Teams to consider visiting South East Queensland to expand on their HP training with both the YQ and NYRC coaches.

Whilst in China the group was invited to race in the Inaugural XiangJiang International Regatta in Changsha, a long way from the Coast in a municipality of over 7 million people in Hunan Provence which has over 70 million.

After winning the first ‘passage’ type race along about 14 kilometres of riverfront and watched by an estimated 500,000 locals crowding the foreshore, the Noosa team along with the Russians, Americans and French were disqualified for not wearing lifejackets. Even though the yachts had safety lines this was a requirement of the Sailing Instructions, albeit, strangely described. This protest hearing was later reopened by the American team due to the ambiguous wording used but again upheld by the protest committee.

On day 2 the Noosa team woke to pouring rain which did not abate all day. The day was held up as the Race Committee awaited some wind but when things did get underway Noosa recorded two wins and one second to take out the event by two points.

In second place were the Russians with the Australian Team from the South of Perth Yacht Club in third and the French Team in fourth Place.

At all times the team was right on the money – winning all but one start and being first to the Top Mark in all but one race. The Noosa Team also was presented the Teams award for the most professional and likable team.

These NYRC Sailors have already been invited back to defend their title and also been offered Chinese sponsorship to consider other China based regattas.