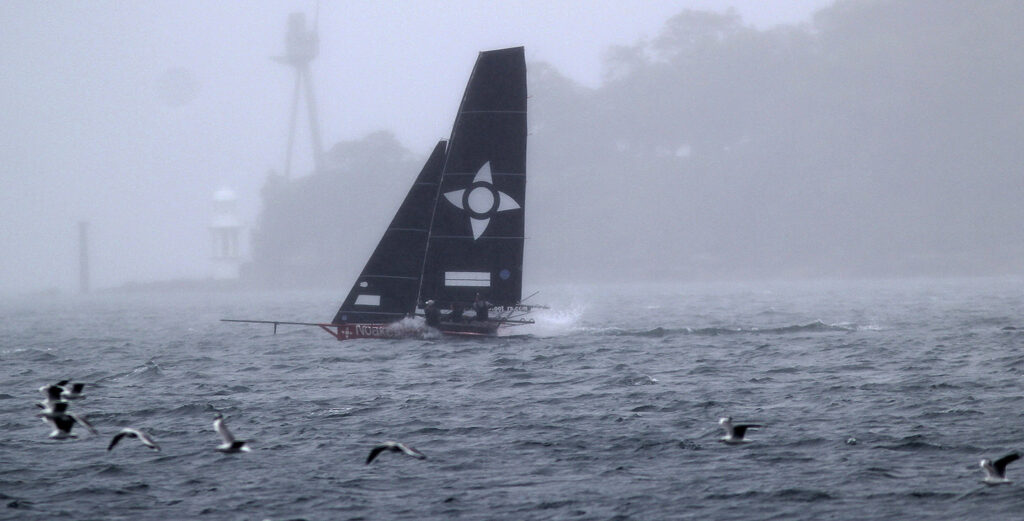 Race leader Noakesailing and seagulls had the harbour for themselves. Pic - 18ft skiffs 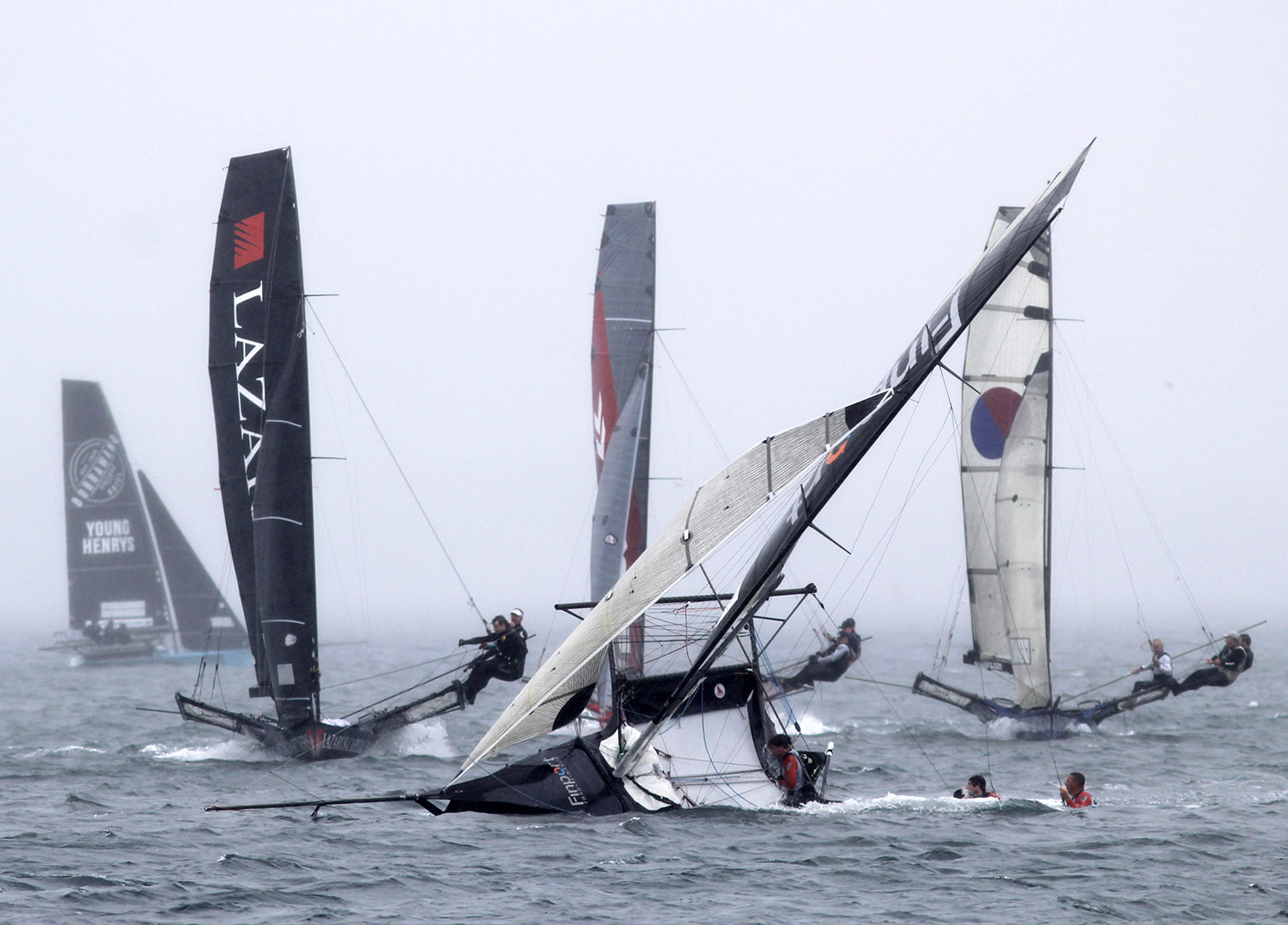 Drama at the Rose Bay mark on lap one. Pic - 18ft skiffs 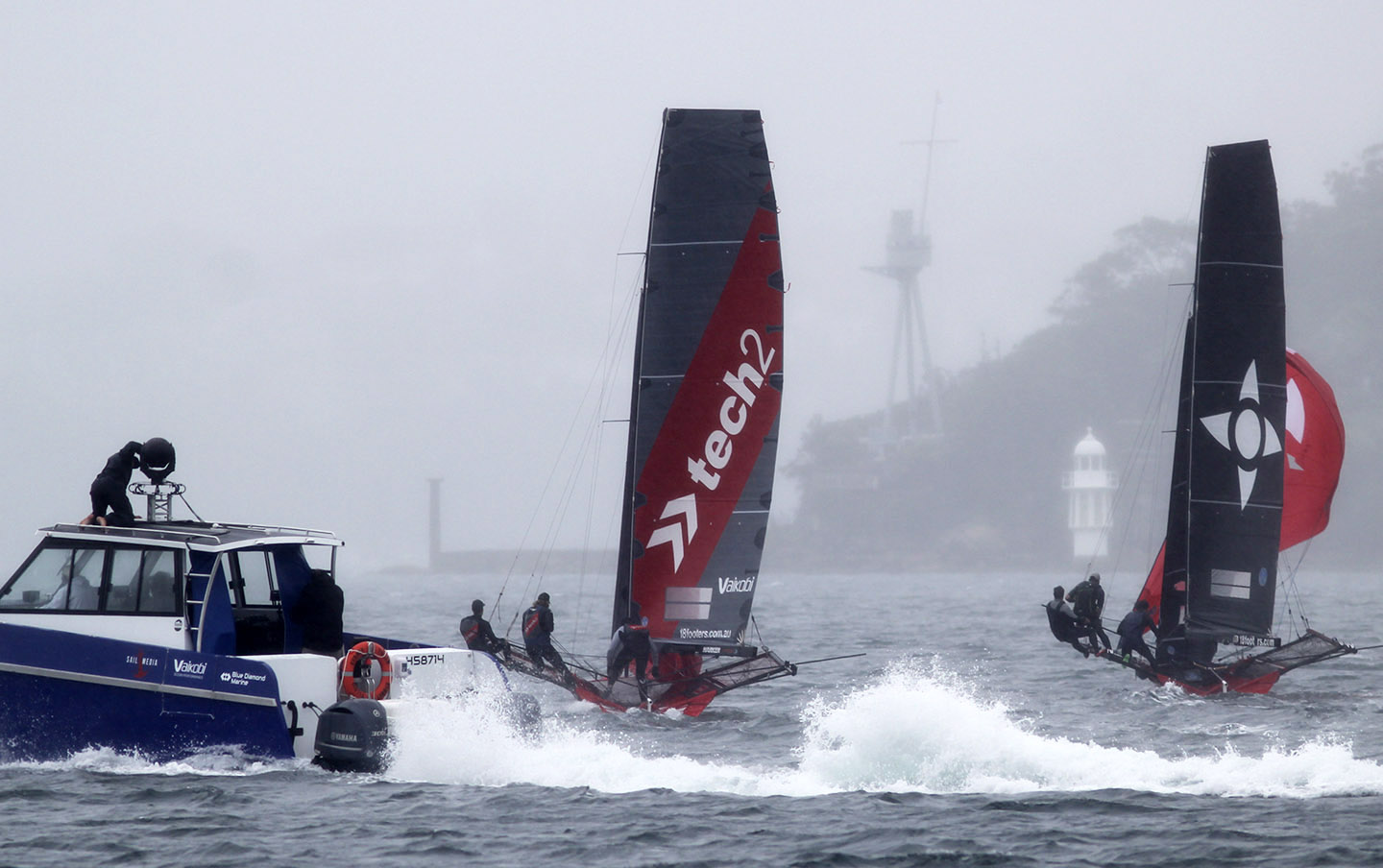 The two leaders set their spinnakers for the run to Athol Bay. Pic - 18ft skiffs 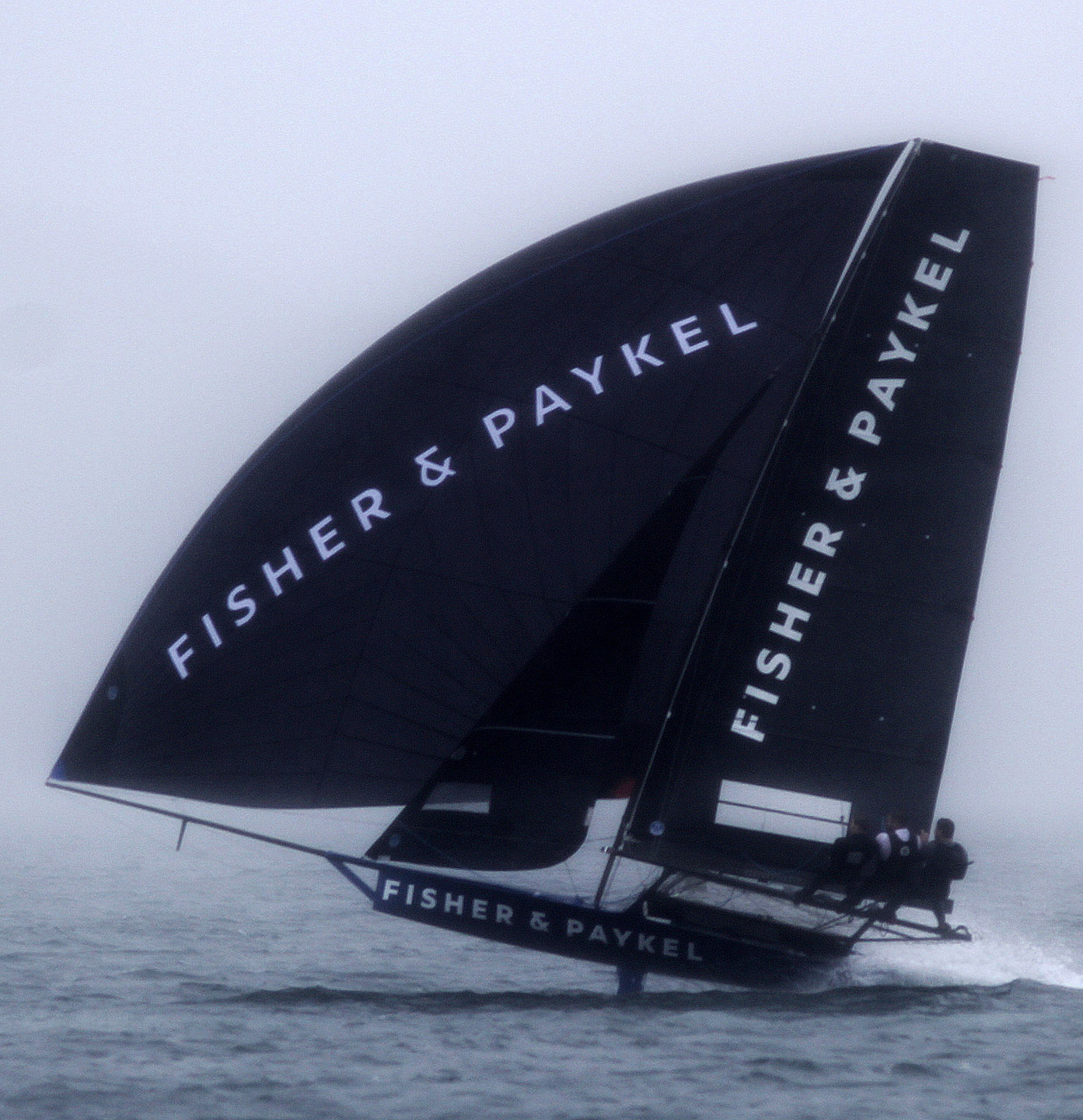 Visibility was poor but the action was spectacular. Pic - 18ft skiffs 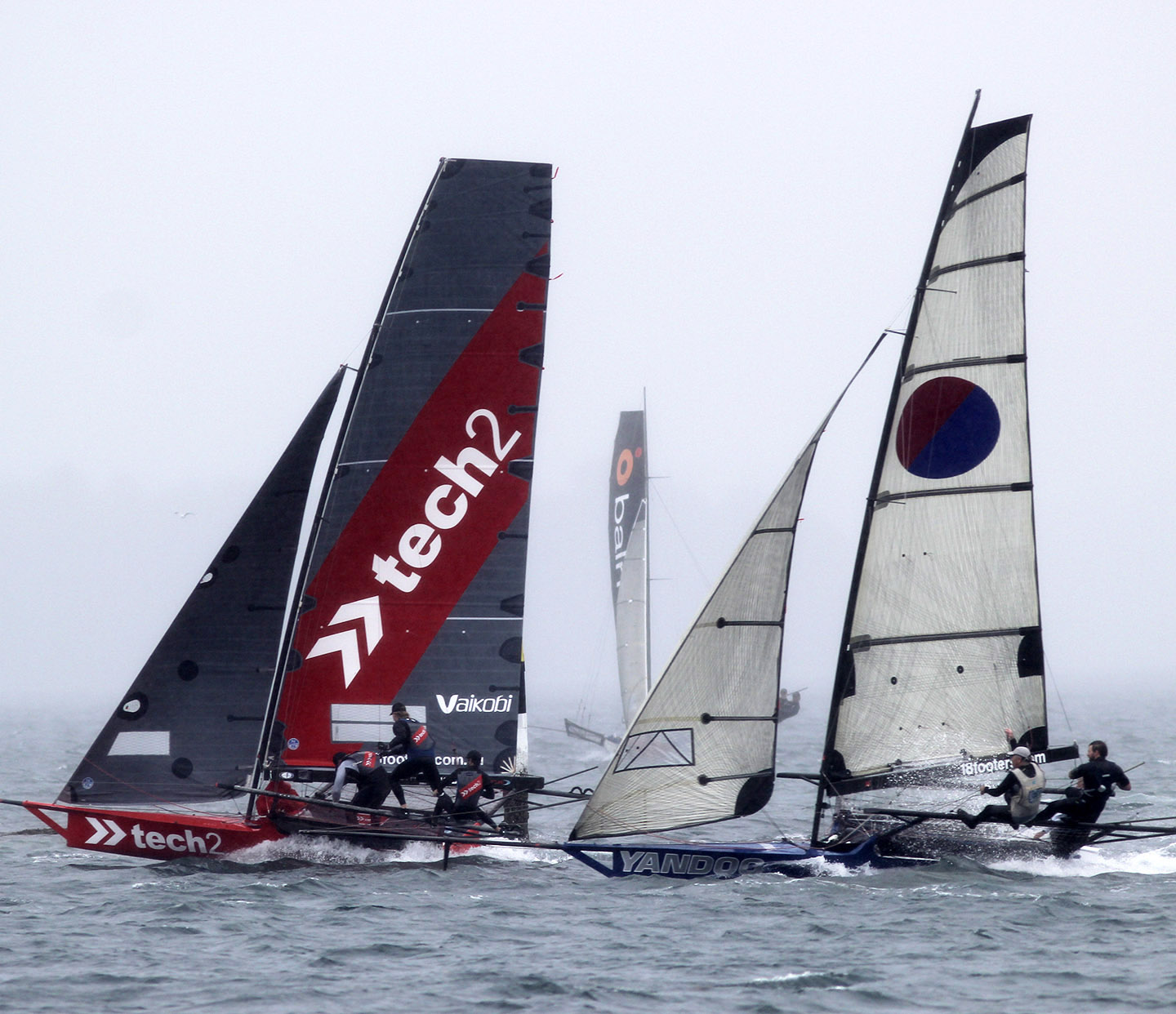 Tech2 and Yandoo on the leg from Obelisk to Rose Bay. Pic - 18ft skiffs 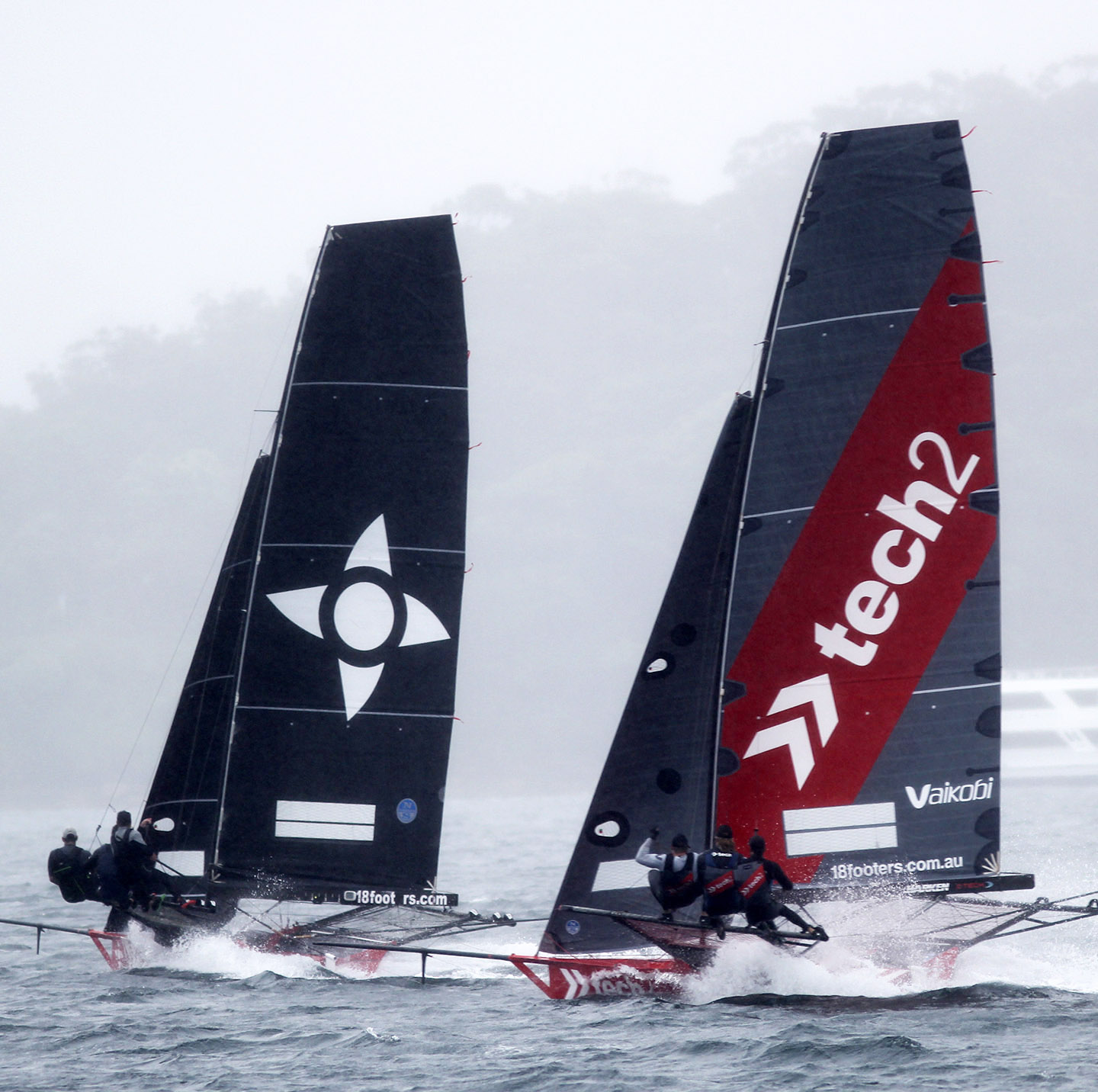 Coming in to the mark off Shark Island. Pic - 18ft skiffs 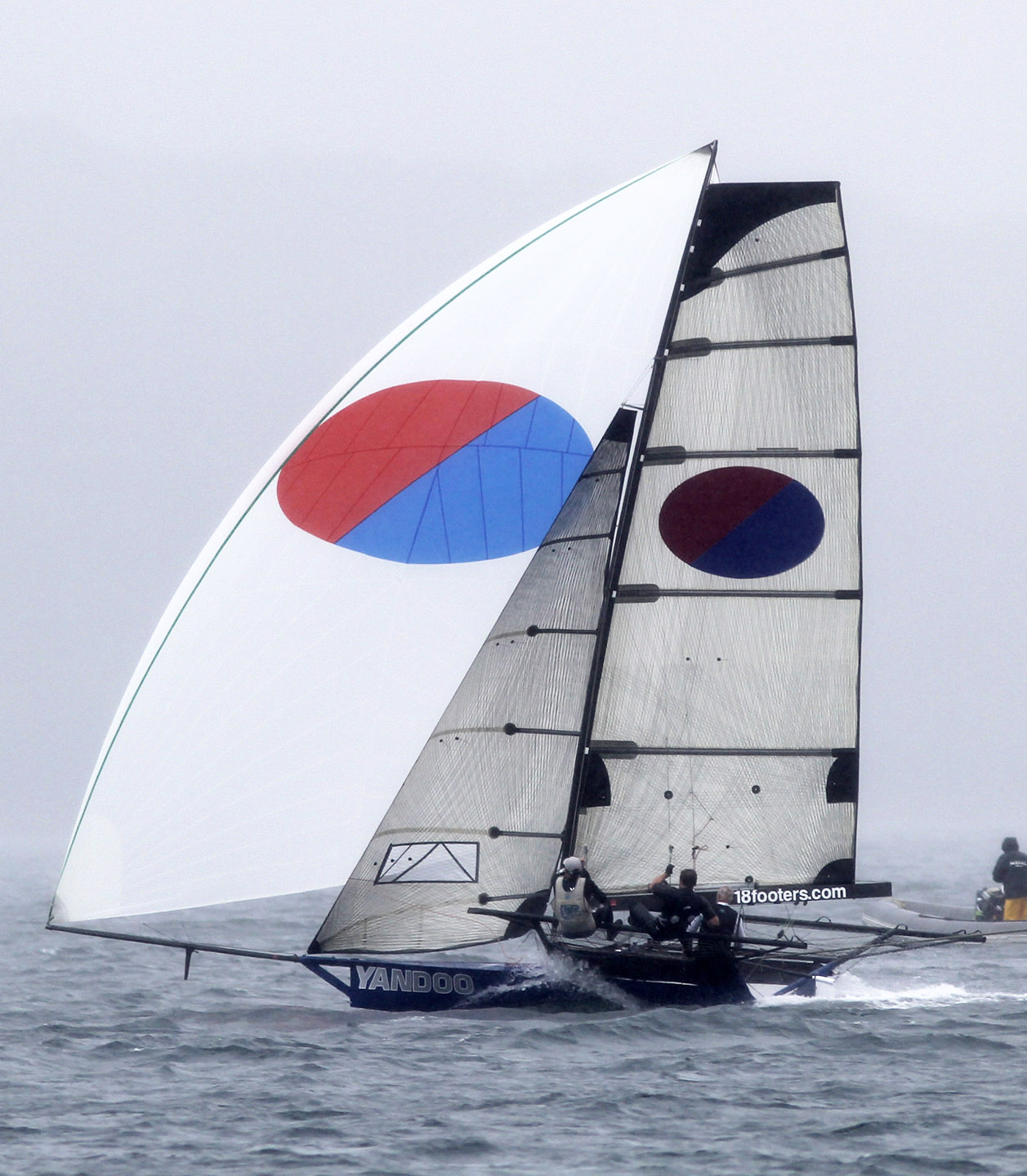 The Noakesailing team of Sean Langman, Ed Powys and Josh Porebski had to battle hard against some strong challenges before taking out Race 1 of the 2021-22 NSW 18ft skiff Championship on a bleak Sydney Harbour today.

In an 18 knot SSE wind and very little visibility, Langman and his team were always near the lead but had to withstand a second half of the race challenge by the current Tech2 team before going on to her victory.

When Tech2 capsized after breaking a spreader, Noakesailing went on to score a great 1 minute 55 second victory from a consistent Yandoo (John Winning, Mike Kennedy and Fang Warren), with Smeg (Micah Lane, Mark Kennedy and Mike McKensey) another 33 seconds further back in third place.

Noakesailing, Smeg and Finport Finance (Keagan York), Yandoo and Rag & Famish Hotel (Harry Price) were in the leading group after the first two legs of the course, along with Lazarus Capital Partners (Marcus Ashley-Jones), which was actually out of the race after having been recalled for an ‘on course start’.

At the Rose Bay mark, Tech2 was in the group following the leaders and began to edge her way through the fleet over the run to Athol Bay, then the work back across the harbour to Clark Island.

Rag & Famish Hotel is showing some excellent form under her talented team and was still in the leading group until her spinnaker carried-away on the run from Rose Bay to Athol Bay.  It was a disappointing end to a very promising performance.

The breeze had gone further south and the leaders were unable to set spinnakers for the second run to Obelisk Bay but the race was starting to ‘hot up’ as Noakesailing was under pressure from Smeg and the fast-finishing Tech2.

Noakesailing and Tech2 edged away from Smeg on the work back to the mark off the south end of Shark Island in Rose Bay and the lead changed twice as the pair prepared to set their spinnakers for the final run to Athol Bay.

The Noakesailing team were quicker with its set and established a break over Tech2.

An expected battle was looming as the pair went around the final buoy, but the broken spreader destroyed the Tech2’s chances as the crew were unable to use their outrigger wings for the final work to the finish line off Clark Island.

Several teams showed glimpses of good form but the less than favourable racing conditions so far this season hasn’t helped most of the newer teams.

Race 2 of the NSW Championship will be conducted next Sunday.  Spectators can follow the racing on board the club’s spectator ferry, however due to the COVID-19 policy, numbers are limited.  Booking online through the club’s website is essential, see:  http://www.18footers.com.au/18-footers-sailing/spectator-ferry/