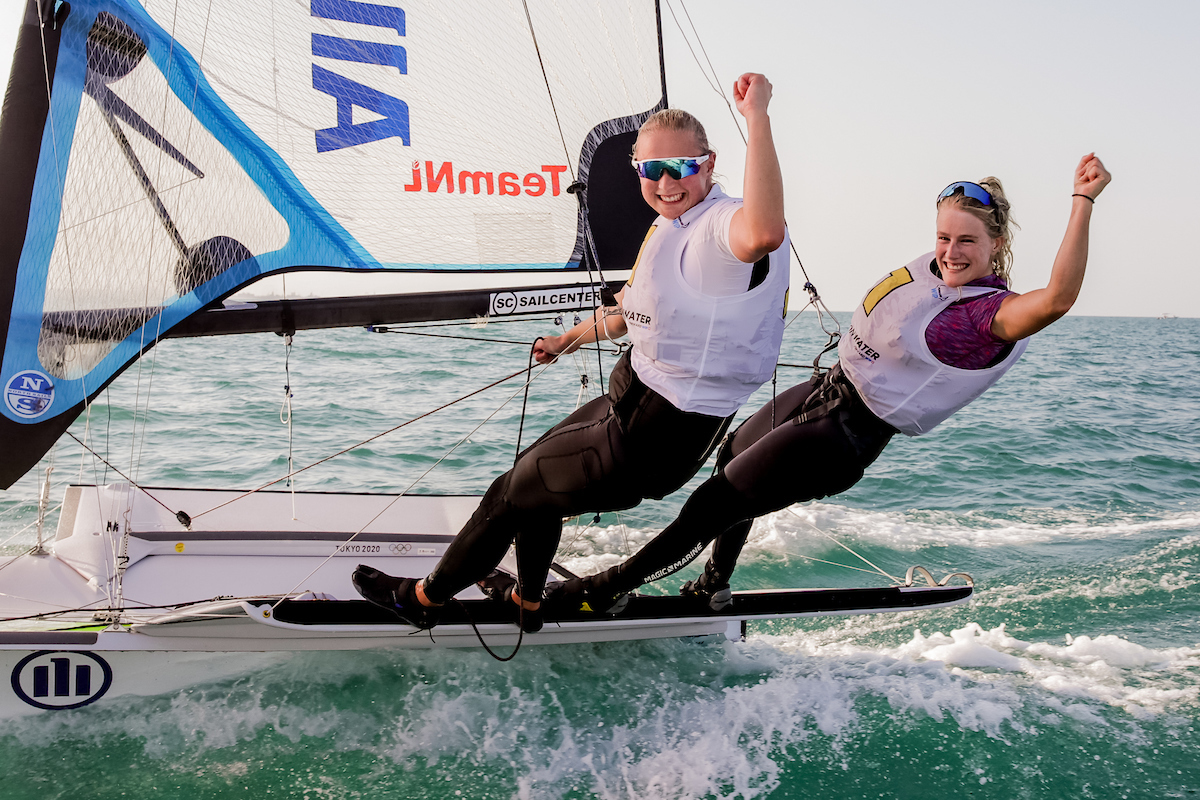 Both teams are new pairings this summer, both teams made it hard on themselves on the last day, and both teams came through in the medal race when they needed to.

“It’s been a few years away from the 49er but it’s great to be back,” said Floris van der Werken, who didn’t have confirmation of the win until most of the fleet had finished. “Bart did an amazing job of putting the boat in the right place.”

In the 49erFX, the Dutch pairing proved that a new team can take on the world. Van Aanholt’s and de Ruyter’s respective partners were injured leading up to the worlds. But the strong training community in Holland proved that sailors were interchangeable.

Happy and loose on shore throughout the week, and with the support of both their parents on shore, the pair made the win look easy. “We’re so happy with what we’ve done here,” said de Ruyter. “It’s great to be out here in Oman with my father, and Odile with her parents, to celebrate together. But I’m looking forward to going back home, even if the weather is cold, just to do normal things again.”

Helene Naess and Marie Ronningen (NOR) kept their gold medal hopes alive by gaining six points on the dutch in the last fleet race.  In the medal race, the Norwegians sailed brilliantly, smoothly gybing into the top three downwind, but it wasn’t enough to overtake the Dutch. Double Olympic Gold medallists Martine Grael and Kahena Kunze (BRA), were also unable to mount a real challenge, despite passing half the fleet in the last downwind leg and ended up in third.

Too close to call in the 49er

In the 49er, the points were exceedingly close as the flying Dutchmen won by only two points in the end. In the final fleet race of the series this morning, the Dutch lost a number of points to the Germans, Tim Fischer and Fabian Graf (GER). A protest was lodged against the Dutch by the Danish team of Frederick Rask and Jacob Precht Jensen, who were sitting in third overall.

After considerable deliberation over the port/starboard incident, the Dutch were disqualified from the final fleet race, and went into the medal race having dropped to second.

“We weren’t happy about the protest,” said Lambriex. “But it didn’t change much, we still had to go out and sail well in the Medal Race.”

Lambriex with van der Werken raced the medal race as fearlessly as they raced the whole regatta. They started behind the fleet and headed right, eventually poking out from the pack to lead at mark one. The situation was made easier with three teams being called over early, including the German leaders, the Austrians and one of the three Polish teams.

The Germans restarted, while the Austrians and Poles did not and were disqualified, setting the stage for a German comeback story. The Germans marched up through the fleet trying to close the gap enough to win back a world title. In the end, Germany had to settle for silver while bronze went to the Danish who squeaked ahead of Ian Barrows and Hans Henken (USA) by one point.

This is the first time any nation has ever won both the 49er and 49erFX titles simultaneously. The Dutch sailing federation went all-in with the 49erFX squad in 2012, bringing all their high performance teams together, continuously rotating the sailors around. They had initial success in the 49erFX, and now, a decade later, it’s paying off in the 49er as well.

John Gimson and Anna Burnet (GBR) have won the 2021 Nacra 17 World Championship, the British successfully defending the title they won in Australia back in early 2020. They started the day in the lead, with Paul Kohlhoff and Alica Stuhlemmer (GER) sitting a few points behind and ended up confidently foiling down the last run of the medal race, finishing third, winning the event by nine points.

“I think that’s one of our big strengths is resetting in the race to stay focused,” said a visibly relieved Gimson as he hosed down his catamaran in the setting Omani sun. “Identifying what’s paid and getting back on to that. That’s what we spent our whole lives working on.”

When asked if they were nervous, Burnet was pragmatic, saying, “Of course. I think it’s healthy.”

Though the Brits lead was almost unassailable, there was drama unfolding behind them for silver and bronze.

The Germans had to come back often during the week as did Ugolini and Giubilei (ITA). The pair were on fire in the middle of beats, picking long, clear lanes and synchronous crew work to blaze through the fleet. They were pushed by the new French team of Tim Mourniac and Lou Berthomieu who came into the medal race in fourth.

With the breeze blowing about eight to 10 knots for the medal race, the top four were ready for a battle.

“We saw more breeze on the left before the start,” said Gimson. “So we wanted to win the pin end. Fortunately for us the Germans had to gybe around and this gave us the position we wanted.”

With the Germans starting slightly to windward but back from the British, Kohlhoff couldn’t hold his lane and was forced to tack away. The British tacked to cover their closest rivals all the way around the two-lap course.

Meanwhile Gianluigi Ugolini and Maria Giubilei overtook the Argentineans for the race lead while Germany was struggling to make inroads into the fleet. The young Italians held on for the race win followed by Argentina. Great Britain crossed the line in third, easily good enough to secure the world title. Kohlhoff and Stuhlemmer finished in seventh place, meaning silver went to Ugolini and Giubilei and bronze to the 2020 Olympic Bronze medallists from Germany.

It has been a stellar couple of years for Gimson and Burnet. After winning the world title in 2020 they took Olympic silver at Tokyo 2020 and then barely took a break before going to Greece where they won the European Championship in September.

Asked if they were going to take a holiday, Burnet replied, “We’re taking an extra two days in Oman, but we’re going to have December off back at home and get back into sailing in the new year.” Gimson, who has been Olympic campaigning for almost 20 years, added, “There isn’t that much time before Paris 2024, There’s been so little racing over the past 18 months, we’re taking every opportunity we’ve got. We love what we do.”