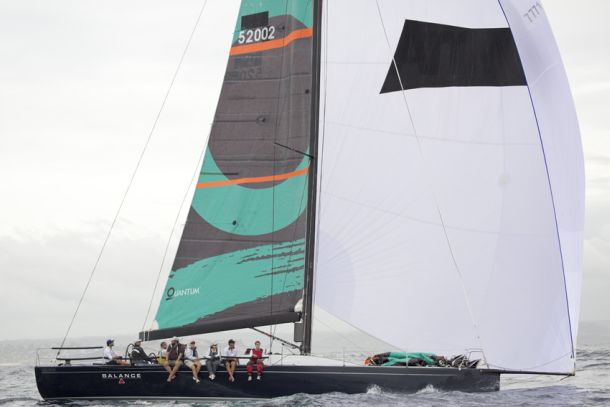 Paul Clitheroe’s Balance came within five minutes of being the only finisher in the Cruising Yacht Club of Australia’s Ocean Point Score’s (OPS) from Sydney to Newcastle late Saturday evening in one of the most frustrating races in recent memory.

Balance, a TP52, had led the race and was best positioned to finish. When Series leader About Time retired at 8.00pm, only four crews remained confident of finishing Race 8 before its midnight curfew. Joining Balance in the long slug to Newcastle were two other TP52’s; Rupert Henry’s Fomo and Mick Martin’s Frantic, along with Olympic medallist Dave Forbes and his Kaiko 52, Merlin.

However, Balance’s owner, Paul Clitheroe was not aboard. “I’m just back from Antarctica and in a brilliant tactical decision, I asked my crew to do the race for me,” he said from home this morning. ”Actually, I started out Saturday feeling very disappointed, but when I saw the Bureau of Meteorology observations saying 2 knots off Norah Head for most of the day and night, I decided I was genius!

“My crew are probably still trying to recover from a few drinks last night as they tried to forget the race,” he ended.

Principal Race Officer Darryl McManus started the race off Sydney Heads at 9.00am in oppressive heat on an overcast misty morning with little air to speak of and drizzling rain. Not what the doctor ordered. Looking ahead, contemplating finishing was already a daunting prospect for most.

A light and wafty south-easterly breeze ultimately decimated the 25-boat fleet. By 3.00pm yesterday 13 crews, doubting they could make the Newcastle finish line in time, retired and headed home. And who could blame them? They left the remainder of the fleet wallowing off Avoca.

Currently, Julian Farren-Price and his About Time have a stranglehold on the OPS Series, counting four wins in his tally. The CYCA member leads Balance and Swish (Steven Proud’s Kernan 44) by an almost insurmountable 12 and 17 points respectively.

Farren-Price has won the CYCA’s OPS for the past four years straight, and eight out of the last ten with his Cookson 12, which continues to impress in its 15th season.