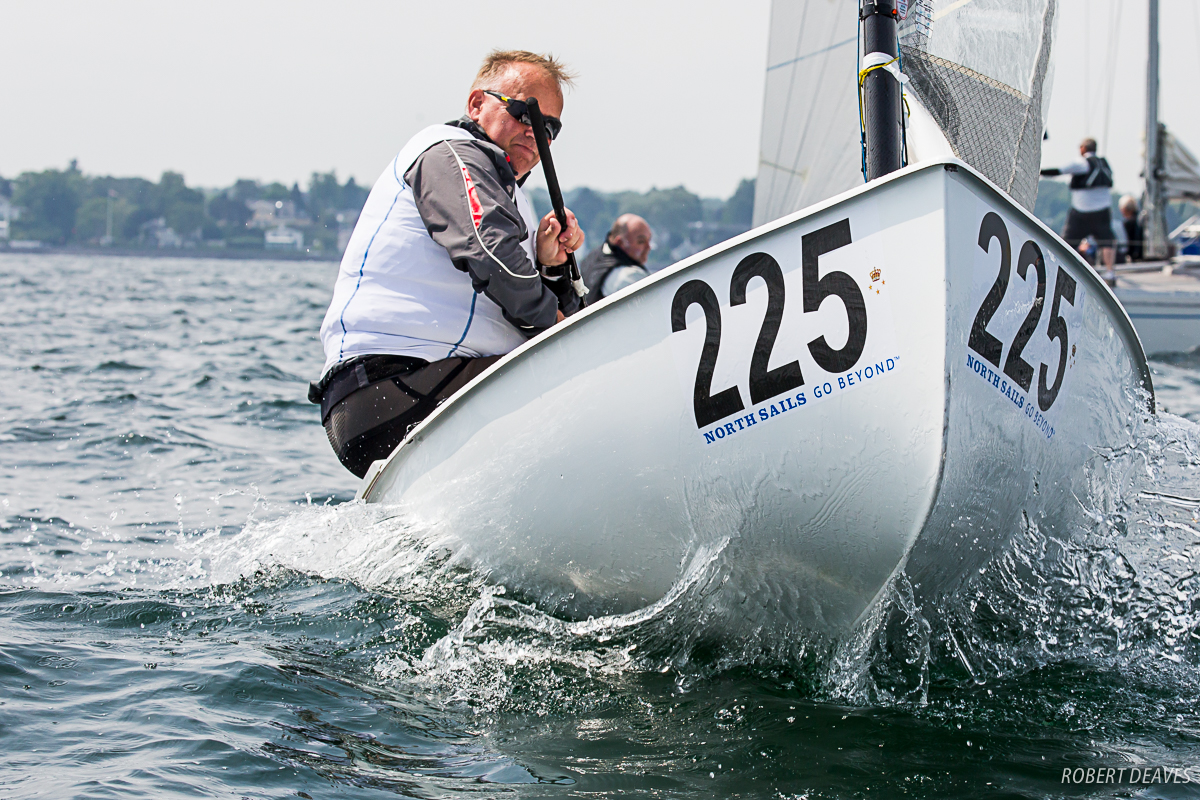 Despite several attempts at a start, no more racing was possible on the third day at the Finn World Masters at Skovshoved, Denmark. With three races sailed out of a scheduled five so far, one more race is needed to have a valid championship. Two days are left, with reasonable forecasts on both days. Vladimir Krutskikh, from Russia, leads from Anthony Nossiter from Australia, and Laurent Hay, from France.

Forecasting Danish weather seems to be a thankless task. While most forecasts showed strong winds, heavy rain and even the occasional thunderstorm, the reality was in stark contrast. After early rain and wind, a largely windless morning followed and at race time a light southerly was in place for the first time this week, with warm sunshine breaking through the thin, high cloud.

The race committee attempted several starts but postponed each time, the first time with more than half the fleet over the line. Later they moved offshore searching for wind. This was rewarded with a 7-8 knot breeze, but again, the start was postponed after a 50-degree shift at the top mark. Then the wind gave up and died and shortly after the race committee sent the fleet back to shore.

This year the Masters has introduced a Sailing Club trophy, which is currently led by WV Randmeer (The Netherlands) from Kongelig Dansk Yachtclub (the Royal Danish Yacht Club) and WSV Het Witte Huis (The Netherlands). There is also a new Nations Cup, which is currently led by Sweden from Russia and Denmark. For each event, the best sailor in each age category is used to calculate the total points.

In the morning the Annual Masters Meeting was held at Skovshoved, with more than 130 sailors present. The meeting began on a sad note with a one-minute silence observed by all present following the news that the Finn class Chief Measurer, Juri Saraskin, had passed away on Monday. He had been involved in the Finn class since 1962, both as a sailor and as a measurer, and his death was not only a shock, but also a huge loss to the class and the world of sailing. His impact on Finn sailing worldwide is immeasurable. The class sends its deepest condolences to his family and friends.

There were three great bids for the 2021 Finn European Masters and this was a much closer vote with Tihany, Hungary, winning 57 per cent of the vote. Tihany hosted the first seven editions of the Finn Euro Masters, before it evolved into a European championship.

Among other business discussed, the meeting heard from Tim Carver, from the Executive Committee of the International Finn Association, on plans to attempt to ‘rebalance the slate’ of Olympic events, with several proposals to bring the Finn back to the Olympic programme. These will be elaborated on in the coming weeks. He reiterated that work continues to reinstate the Finn, working constructively with World Sailing. The meeting then heard briefly from Gerardo Seeliger, who is competing in the Masters this week and intends to stand for the job of President of World Sailing in 2020.

Tonight the fleet will enjoy the championship dinner held at the nearby Bakken, the world's oldest operating amusement park, which opened way back in 1583.