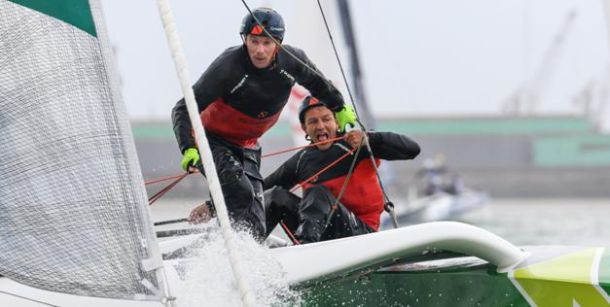 They have spent the day on the water to sail in Stadium racing, but in the end, none of the races they’ve started will count towards the ranking. In the new racing format, the competitors have to sail a minimum of two stadium races in one day to score points. And unfortunately today, for the last day of racing in Dunkirk, the wind only allowed them one race.

A 11.30, after the VIP sailing with guests onboard, the first of the two groups took the start of the qualification race. The wind on the race-course was blowing 15/20 knots but a few minutes earlier the fleet saw a gust up to 25 knots which force the race committee to call for a reef in the main. Winner of the coastal race on Friday, Grandeur Nature Vérandas had a good start but blew the gennaker at the windward mark and had to retire from the race : “The gennaker got stuck and we could not finish,” explains Tim Mourniac. “We went straight to the beach to try and get a new one so we could do the second race, but in the end we waited all day under the rain for nothing. But it’s good. It cancels our mistake. The Gods are with us, and we can keep the blue gennaker of the race leader.”

Groupama, PRB and Combiwest were the three first boats on the finish line. During the race the wind started to die and before the start of the second group of boats, the committee called for full mainsail again. Prince de Bretagne took the win in front of Normandy Elite Team and Spindrift. “I am happy to know that they have sailed well, although it is frustrating to miss a few nice points,” admits skipper Lionel Lemonchois, who was onland to watch the race. “It’s only the beginning of the Tour and we will have to keep going. We have a great team.”

The forecast initially had very light wind on the plate for today, and it was not a suprise the see the wind die off and to leave the fleet with nothing but rain and lightnings. After a long wait on the water, the race committee decided to cancel the racing and send the Diam 24s back to the beach at 4pm so that the teams have enough time to dismantle the boats, pack everything, and drive to the next stage of the Tour Fécamp, 300km down the coast. “It is the first time we are going to do that. For that, the pace is not too tight, mais but we know it’s going to get harder because there is still a long way to go. Now we have two hours of packing, then 3 hours of driving and again 2 hours to put the boat back together. It’s going to be a long night for our shore team,” says skipper of Souffle du Nord, Antoine Carpentier.

Next stage : Fécamp, with a Coastal Race on Monday and Stadium Racing on Tuesday.

“We’re happy this day doesn’t count towards the ranking because we finished second last. But for us, it was still a good day of practice. There are so many little things we have to learn. Like taking a reef in the main. It was the first time for us. And we didn’t quite understand we had to do it. It took us a while to figure out how to do it properly but Rod and Evan did really well, and I was at the helm. Now we have a long night ahead of us. Packing everything, driving to Fécamp, and put the boat back together again. I am looking forward to tomorrow and to seeing a new place.”

“We are not frustrated. That’s what sailing is all about. The race committee did everything they could to start another race, but the weather was not on our side today. Things happen. We had a very nice coastal race on Friday and we are happy to see we are in the game. We’ll keep improving. There is a great atmosphere in the team, we are having fun on the water. Hopefully it will last all the way to Nice .”