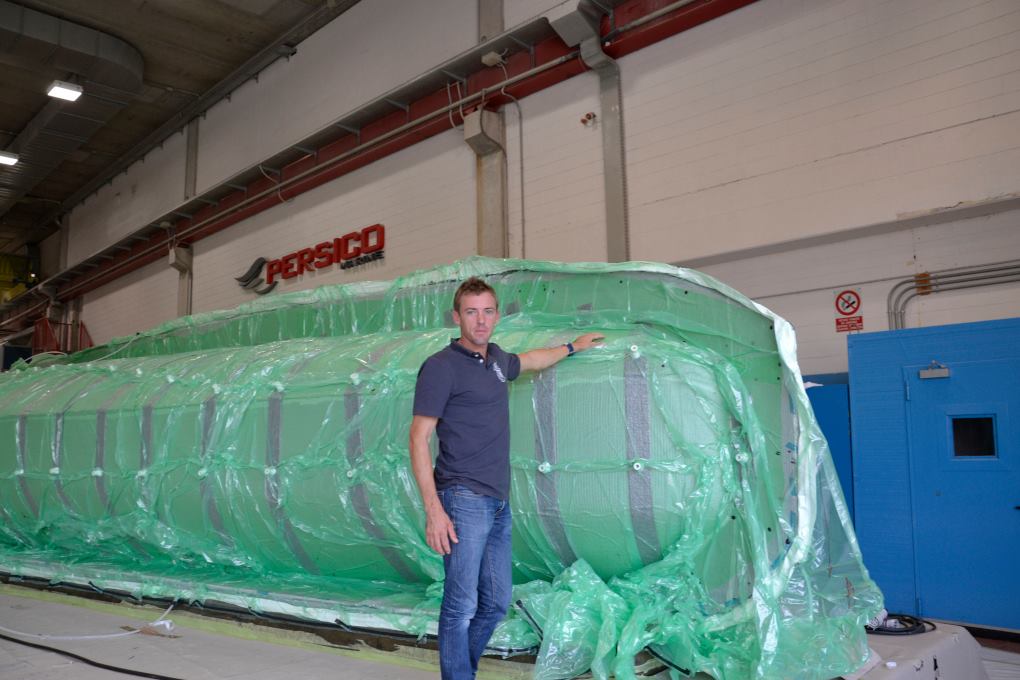 Thomas Ruyant with his new IMOCA

Early this week, Thomas Ruyant visited the Persico yard in Bergamo (Italy) to see how work was going on his future IMOCA, a Verdier designed boat that is due to be transferred to Lorient in June before she is launched in late July. At the same time, the skipper from the North of France continues to search for one or more headline partners to sponsor him during his second attempt at the Vendée Globe.

Winner of major events in Class40 (2010 Route du Rhum), in Figaro racing (2018 Transat AG2R with Adrien Hardy) and in Mini 6.50 races (2009 Mini Transat), Thomas is also very experienced in the IMOCA class and is developing a very strong project. He has a lot going for him. We met up with the skipper to find out more.

Last Monday, in the Persico yard, you saw for the first time the hull and deck of your future IMOCA. What were your impressions?
“Fantastic! We’ve been thinking about this boat with the designer Guillaume Verdier for a year. It was great to compare what she really looks like with what we saw in the designs months ago and to be able to share that with my team and the workers in the yard. I am not a specialist in composite materials, but I could see that the quality was remarkable. The level of expertise and technical know-how is extremely high and everything has gone to schedule.

“This visit confirmed that Persico leaves nothing to chance. Everything is perfectly clean and tidy in the yard and when you enter, it feels like a laboratory. That is very reassuring when you know what this boat will be going through. Persico is one of the best composite yards in the world, so it is logical that today they are building one of the world’s fastest monohulls!”

However, this yard has so far only ever built one IMOCA before – Pieter Heerema’s former No Way Back (which was later bought by Fabrice Amedeo)…
“That’s true, but they have made boats for the America’s Cup, the Volvo and big monohulls like the TP52s. The expertise in this yard is well-known. They aren’t used to building round the world boats, but we asked them to work on a composite ‘box’ with deck and structure. For the rest, our team will take over.

“We’re pushing the designers to the limit”

Can you tell us about how work is progressing?
“The hull has been finished and that will shortly be the case for the internal structure of the boat. Meanwhile, the deck is currently being finished. The foils are being built by Persico. I saw the moulds and it was quite impressive. The keel and mast, one-design parts, are being manufactured in France. We are working with a lot of different suppliers: North for the sails, Karver for the deck hardware, Mad Intec for the electronics and autopilots…

“All of the parts are ready or under construction and the pieces of the puzzle will shortly all come together. Fitting the systems and deck hardware will partly be done at the Persico yard to save time. During the month of June, the boat will be transferred to Lorient. It will then take a month or so to fit the keel, mast and the final details before her launch, which is planned for late July or early August at the latest.”

What can you tell us about the architectural choices for this IMOCA?
“It’s not surprising, but she was designed around the foils. We designed a sturdy boat with a strong structure. The goal is not to be the fastest in the currents off the island of Groix, but to have a good all-rounder to keep up a good average speed around the world. What I can say is that the hull has tighter lines than the IMOCA from the previous generation and that the foils are aimed at getting a good VMG downwind.”

Stability has become a crucial component on these boats built around the foils…
“Yes indeed. The boat needs to be stable to ensure you can bear living on her. You can see that in the design of the hull Guillaume Verdier came up with. IMOCAs have become extreme and can be violent. The skipper is the weakest link. You have to increase their ability to get the most out of this type of boat. You have to look after the sailor and that’s why we worked on the ease of sailing her in the cockpit and inside the boat.”

For the moment, only one new generation IMOCA has been launched – Jérémie Beyou’s Charal. Based on what you are saying, your boat appears to be quite different…
“Yes, there are huge differences in terms of the shape of the hull and foils, since the philosophy behind the boats is different. In the last Vendée Globe, all of the new IMOCAs were designed by the same combination of architects (VPLP-Verdier). The boats were of course not identical, but there were obvious similarities.

Particularly as you’re not giving much away and everyone has their own little secrets…
“That’s true. We are not going to reveal everything about our prototypes, as there is a lot at stake in terms of the competition, the technology and the financing. We have an idea of the way these boats will work with Charal and we can see how tricky they are going to be to sail. What is certain is that everyone will have large foils. The closest IMOCA to mine is likely to be Charlie Dalin’s Apivia, which was designed by the same architect, using the same basic drawing.”

For the moment, you are busy looking for partners and that takes up a lot of your time…
“Yes. That is the main thing for me at the moment. We have changed the order of tackling this problem by starting work on the construction of the boat (thanks to some investors) before finding the headline partner or partners. We didn’t have the choice, if we wanted to get a good performing boat from the latest generation.

“We can offer a unique turnkey project which has a huge potential. The team is already together and we have a superb boat. You just need to push the button to join us in this adventure. Everyone knows how much feedback is possible with the IMOCA circuit and the Vendée Globe. The return on investment for a firm no longer needs to be explained. Sailing used to be seen as the boss’s little pet hobby, but that is no longer the case. There are some real strategic projects behind this now. To accompany us right up to the 2020 Vendée Globe, we need 4 or 5 million euros spread over three years.”

Will we be seeing you in all of the events in the IMOCA Globe Series?
“Looking at the timing, it is going to be very tough to compete in the Rolex Fastnet Race (start on 3rd August). But there’s no way I’m going to miss out on the Transat Jacques Vabre. There is going to be an incredible line-up. It will be the ideal opportunity to get to know the boat and fine tune her sailing double-handed, but also a chance to qualify for the Vendée Globe. I shall also be lining up in the two transatlantic races in 2020, The Transat and the New York-Vendée.”

What deadline have you given yourself to find a headline partner?
“I haven’t given myself a firm date, as I’m confident it will happen. There is no plan B, just plan A. I will be there at the start of the next Vendée Globe!”