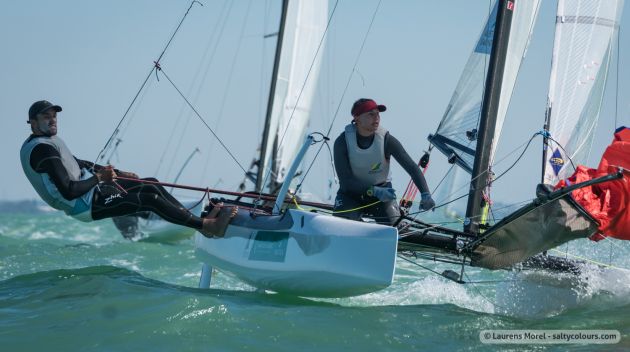 Watwrhouse and Darmanin at the 2016 Nacra 17 Worlds. Photo Laurens Morel.

The 2016 Nacra 17, 49er/FX World Championships regatta wrapped up this morning Australian time, Sunday, 14 February 2015 local time with Olympic gold medallists Nathan Outteridge (NSW) and Iain Jensen (NSW) finishing outside the medal ranks and in sixth place. Going into the final top-ten Medal Race in second, the pair also finished the race with a second place, but an early start and disqualification as a result meant a drop to overall sixth in the end.

World #1 Jason Waterhouse (NSW) and Lisa Darmanin (NSW) finished the Nacra 17 World Championships in fifth after a third place in the Medal Race.

Both crews were already selected on the Australian Olympic Team in December.

It was the first time all three of the fastest Olympic boats teamed up for a championship together. The 49er men’s skiff has been on the Olympic program since Sydney 2000, while both the 49erFX women’s skiff as well as the Nacra 17 mixed-gender multihull will premier on the program at Rio 2016.

Over 120 teams from more than 37 countries competed in front of the Pier on Clearwater Beach, Florida from February 9-14, 2016.

Nathan Outteridge and Iain Jensen went into the Medal Race in Silver position after posting a fourth, ninth and first in three strong races earlier in the day. This catapulted them back up from their penultimate day sixth place and into second going into the final race.

But unfortunately a premature start (OCS) in the Medal race cost them dearly and the pair finished outside the medal ranks in sixth.

“We were pretty happy with this morning's sailing and it was to give ourselves a chance for the podium. But we had a bit of a disappointing Medal race from a results standpoint. There was an individual recall at the start and we saw the Danish going back so we wanted to see if the flag went down when they went back. They went back and the flag stayed up, but by that point we were quite a way up wind. And for us to go back would have meant that we would have been last in the race the whole way around, so we decided to keep going. The race was sailed well and we came second, unfortunately we were just a little early at the start,” Iain Jensen explained the events in the Medal race.

This wraps up a challenging week for the pair.

“It’s been a tough week here. We had an up and down qualifying, one really good day and one wasn’t the level we need to be to be at the front of this fleet. There were a few odd mistakes throughout the week, which set us back. Yesterday was tough in the rough conditions and quite a painful exercise with the injury I’m carrying and to sail well today was quite nice. This is not really what we’re looking for, we need to do better and we can’t make mistakes like we are. There’s lot of promise but there’s still a lot of hard work to still do,” Nathan Outteridge said summing up the week.

And with regards to the rest of the Australian crews he added:  “The Aussies squad had a bit of a tough event as well. Dave (Gilmour) and Lewis (Brake) had a really tough day in qualifying and were sitting way down the fleet in 47th. But from there they sailed one of the best events of everyone. They made the cut into Gold fleet, had a really good final series and just missed the Medal race. So after a tough start they had a good finish and it was nice to do Gold fleet with another Aussie team.”

Australian Sailing’s new combination of David Gilmour (WA) and Lewis Brake (WA) sailed a strong regatta, but after carrying a few high scores from earlier in the week a 23, first and fourth on the last day was not enough to make it into the top-ten. The pair just missed the Medal and finished the regatta in 13th.

“We haven’t spent a lot of time sailing together and the more time we spend in the boat together in race situations the better. Our boat speed improved and we were actually sailing really well at the end. Just day two of the regatta was just a shame. This was probably one of the most competitive Worlds to be at as it’s just before the Olympics, so we are pretty happy with how it is going,” David Gilmour said.

The Australian 49er squad will head to Palma and the European Championships in Barcelona in March next before planning more time training in Rio.

In the Nacra 17 World #1 Jason Waterhouse (NSW) and Lisa Darmanin (NSW) went into the final top-ten Medal race after a ‘character building’ tough penultimate day saw them drop from second into fifth place and with only a slim chance left for a podium spot.

It was a day the pair would rather forget, but with the pressure for selection off their shoulders and after winning Silver at the Sailing World Cup in Miami a couple weeks ago, it is all about learning from each race and to take the most out of it for the tasks ahead.

“We went into the Medal race in fifth and the goal was to win it but unfortunately we didn’t quite execute that. We sailed the race pretty well, but a few critical mistakes on the first beat cost us a bit. We still finished the race in third and fifth overall and it was a good day,” Jason Waterhouse said.

“The World Cup in Miami and the Worlds were priority events for us as they are very similar Rio events. And we were happy to get a Silver medal in Miami and fifth here, which shows our consistency at both regattas and in all wind conditions. So we’re happy with that.“

And about the event as a whole crew and cousin Lisa Darmanin added: “It’s been a pretty tricky week and the conditions have thrown a lot at us. But overall we are happy with how we’re sailing and how we are pushing ourselves. We had one really costly day and a few costly races, which was disappointing, but in the end we’re training for a Gold medal in Rio and we’ve learnt a lot of lessons this week. It was a tough event, we’re still pretty stoked with fifth and our eyes are still on the prize.”

Both the 49erFX and Nacra 17 fleets will premier on the Olympic sailing program in Rio, with the Olympic spot in the 49erFX still up for grabs and to be decided over the next couple of months. .

Three Australian Sailing Squad 49erFX crews contested the Worlds with all three crews qualifying for Gold fleet but missing out of the top-ten Medal race.

Tess Lloyd (VIC) and Caitlin Elks (WA) finished the regatta as the top ranked Australian boat in 14th after posting a 16-14-12 on the last day.

“It was pretty tricky today and a bit shiftier than all the other days, but overall I think there are some good positives we can go away with. We are going back to Australia now and will have to put in some good hours and will head back to Europe after that to aim for those good results.” Tess Lloyd said.

And crew Caitlin Elks added: “We didn’t end up in the top ten as we had hoped, so we’ll have a bit of work to do over the next few weeks. But we are really trying to get an Olympic worthy performance on the score board.”

Olympic silver medallist Olivia Price (NSW) and Elize Solly (VIC) have the same goal and were not far behind to finish the regatta in 16th after posting a 22-20-9 series on the last day of the finals series.

“We had a shifty breeze off the land, which we haven’t really had so it was interesting today. We couldn’t really pull ourselves together and make the best decisions on the racecourse and really suffered because of that,” Olivia Price said about the last day.

And about the event as a whole she added: “Our result here wasn’t really what we were hoping for. We do need to go back and just figure out where exactly we went wrong, but we’ve got a pretty good idea. We do have to put in a performance at some stage and we’re hoping to do that in the European events.”

About the plans ahead crew Eliza Solly said: “We’re going back home now and getting straight back into it all and reviewing what we’ve recently done. We’ll head over to Europe for Palma and our Euros in Barcelona and then over to France for the World Cup in Hyeres.”