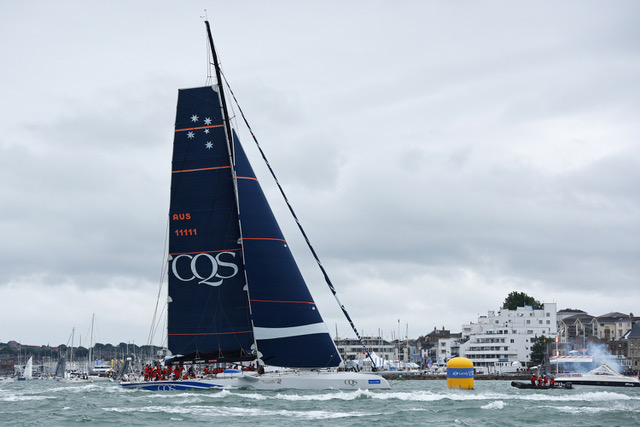 Gust of 35 knots and big seas challenged Ludde Ingvall and his CQS crew in their race around the Isle of Wight today, as the opportunity to break the record for the course seemed so achievable, but then slipped from their grasp.

Under a steel grey sky, CQS blasted off from the Royal Yacht Squadron starting line at 09:45 this morning on an anti-clockwise circumnavigation of the island, a 50 nautical mile dash.

Taking slightly less than an hour to reach the famous landmark of the Needles at the western end of the island, a record time look eminently possible, with calculations predicting a time of up to 15 minutes less than the existing record of 3 hours, 20 minutes and 9 seconds.

Once around this jagged corner of the island conditions worsened considerably, “there was a lot more breeze than we had expected,” explained Ludde, “and we ended up in the Needles washing machine, where the tide meets big waves and it’s shallow, and it got incredibly bumpy for us.”

He believes that while in these tumultuous seas some damage occurred as soon after, one of their jibs started to unfurl, and flogged itself to shreds. The team then had to slow the boat while they retrieved the sail and the chances of a record blew away with the tattered sail.

They eventually finish the race 27 minutes outside the record, “but at least we got around, which is good, but the crew have a fair bit of work to fix things for the Rolex Fastnet race.”

Going on to talk about the Rolex Fastnet race, he said, “it looks a lot lighter now than we had been expecting, and if it’s light to start with we’ll be looking pretty good. Then if the wind builds we should be in a good position.”