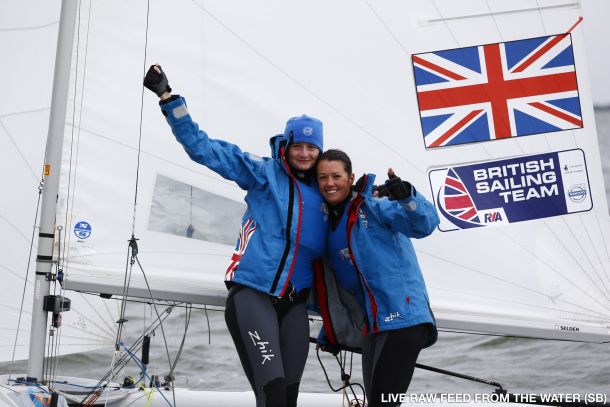 There is no Australian media coming out of the Delta Lloyd Regatta at Medemblik so details are sketchy. But in the absence of stars such as Nathan Outteridge/Iain Jensen (49er), Mat Belcher/Will Ryan (470) and Tom Burton (Laser), the Australian Sailing Team is well placed with three crews currently in medal positions and nine in the medal races.

There are also two Australians in the Finn medal race, with Jake Lilley qualifying second behind local sailor PJ Postma, with Oliver Tweddell in sixth.

In the 49er, Joel Turner and Lewis Brake have continued their excellent regatta to qualify in third.

In both the 49erFx and Nacra 17, Australia has qualified two crews, with identical placings. Haylee Outteridge and Sarah Cook are sixth in the 49erFX, a place ahead of Tess Lloyd and Caitlin Elks, while in the multihull Euan McNicol and Lucinda Whitty are sixth, a place ahead of Darren BUndock and Nina Curtis.

Here is the report issued by the organisers:

Sophie Weguelin and Eilidh McIntyre won gold in the 470 women’s class at Delta Lloyd Regatta after heading off a strong challenge from their Great Britain team mates, Amy Seabright and Anna Carpenter.

The breeze was highly variable and gusty, ranging from 7 to 18 knots, with rain clouds sweeping across the Medal Race course in front of the sailing centre at Medemblik. The two British boats went into the Medal Race on equal points, with the Polish team Agnieszka Skrzypulec and Mrozek Gliszczynska not far behind. But Weguelin got an excellent start that enabled her to start covering her fellow Brits. These two team crossed the line in 1st and 2nd, taking gold and silver for Team GBR, with the Poles securing bronze.

In the 470 men’s Medal Race, it was a formality for the dominant Swedes, Johan Molund and Sebastian Ostling, who have been the class act in Medemblik this week. “It’s never easy,” said Molund, “but we got a good start and we just wanted to keep an eye on the Greek guys. We love the weather in Medemblik. It’s great to win here again.” Panagiotis Kampdouris and Papadopoulos Efstathios took silver, with the Russians in bronze.

Earlier in the day it had been much breezier, so much so that the 49er men were sent back in without holding a race. The windy weather always suits the Poles in the RS-X windsurfers, and they hold the top spot in both the men’s and women’s fleets.

The Laser men looks set to be a match race between Australia’s Matt Wearn and the Netherland’s Rutger van Schaardenburg. The same could be said of the Laser Radial women, with local favourite Marit Bouwmeester holding a 2 point advantage over Annalise Murphy, which in a double-points Medal Race means the Dutch and Irish rivals effectively go in all square.

In the Nacra 17, young Kiwis Gemma Jones and Jason Saunders put the hammer down again to score a 1,2 and now go into a three-way fight for the medals with two Danish teams, although two French crews also have an outside shot at the podium.

There was no change to the lead of the Finns, 2.4mRs or men’s and women’s skiff classes, with all the leaders going into their Medal Races with a reasonable points buffer.

With the breeze set to blow strongly once again for what has already been a typically windy week in Medemblik, the teams at the top of the leaderboard should be looking forward to a breezy finale. However in short course Medal Racing, anything can happen, and you can never take victory for granted – especially on the choppy, treacherous waters of the IJselmeer.