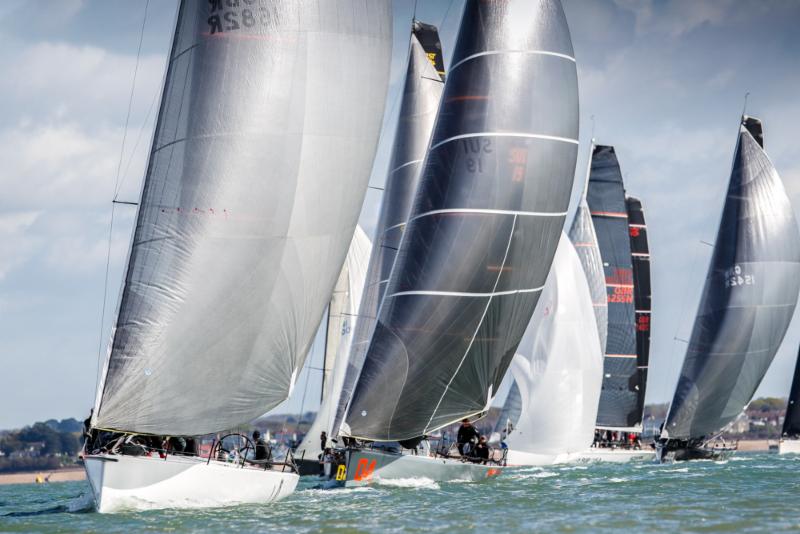 Tokoloshe leads the FAST 40+ fleet at the RORC Easter Challenge but star performer throughout the regatta was Sir Keith Mills' Invictus. © Paul Wyeth/pwpictures.com.

17/04/2017
Sailors at the RORC Easter Challenge left Cowes this Easter Sunday sunburned, full of chocolate and brimming with freshly acquired wisdom about their sport.
Across the 50 boat fleet competing at the RORC's three day long domestic season opener, that doubles as its annual training regatta, it was close across most classes, but none more so than IRC One. In this, Mike Greville's sparkling Ker 39, Erivale III managed to lose her three point lead in today's opening round the cans race and the victor was only decided on the final, head down, charge for the finish line in race two.
Ultimately Roger Bowden's King 40, Nifty (ex-Tokoloshe 1), claimed first overall, two points ahead of Erivale with another King 40, Cobra, another point behind. As Nifty's skipper Sam Cox recounted: “Coming into the finish [of race 2], Zero pipped us and we had Erivale III and Zero II stacked up right behind us. All weekend we've been having really good boat-on-boat racing between us – it was fantastic.”
Three races were scheduled today, but the wind dropped as the new breeze attempted to settle towards the end of the first race, causing the course to be shortened for IRC Two and Three. With the wind shifting dramatically, it took three attempts to get what was to be the second and final race underway.
Within IRC One, there was a match race between the two Mark Mills-designed MAT 1180s. Tor McLaren's two week old Gallivanter got its first taste of glory, winning today's opening race, However sistership, Christian Zugel's Tschuss, finished seven points ahead overall.
McLaren appreciated the coaching laid on by the RORC, spearheaded by Jim Saltonstall and Eddie Warden Owen and supplemented by North Sails UK staff: “We were very happy with the way we performed. We were together upwind – which we weren't on day one. The groove is very narrow and main and runners have to be trimmed in sync. The crew work at the front is really good and our tactics were great.”
Star performer throughout the regatta was Sir Keith Mills' Invictus in the FAST 40+ class, racing within IRC One. With a 1-3 today, the black Ker 40+ won the regatta by a mighty 11 points. However it was not easy and all five of the FAST 40+ had their moments with Tony Dickin's Jubilee looking particularly strong today, leading the opening stages of race two, which was eventually won by Mark Rijkse's 42° South.
“The first race was tough,” recounted Mills. “We were third at the first mark, but managed to climb back and get a comfortable win. Then, in the second race, we didn't get the greatest start but we kept our place all the way round and we had a photo finish – 42° South got it, but there was half a boat length between three boats, which made it really interesting.”
In IRC Two, a late charge from RORC Admiral Andrew McIrvine on La Réponse was enough to get his First 40 onto the podium but not enough to make an impression on the race for the lead between David Franks' JPK 10.10 Strait Dealer and Redshift Reloaded, the Sun Fast 3600 belonging to Ed Fishwick.
While La Réponse claimed today's first race and Strait Dealer the second, Redshift Reloaded posted a 2-3 to win overall by three points from Franks' yacht. “The first race was tricky,” recounted Nick Cherry, with whom Fishwick will be racing doublehanded for the remainder of the season. “It went light and at one point we were looking pretty bad and La Réponse ditched us. In the last race, we only had to finish five points behind Strait Dealer, although we were worried we were OCS. Also there were some big shifts, but they were reasonably predictable.”
For the Redshift crew, winning on this the boat's first major competitive outing is a big achievement: “We are very pleased,” summarised Cherry. “The boat was going quick. The crew did well and it was nice tight racing.”
Fishwick praised the RORC Race Committee: “It is a well organised regatta and they did a really good job.”
Aside from Invictus, the most consistent performance was from Sam Laidlaw's Quarter Tonner, Aguila. The RORC Easter Challenge defending champion today put in a race win and a 2.5, to reclaim IRC Three by 7.5 points from Ian Braham's MG 346, MS Amlin Enigma.
“It was fantastic conditions – it couldn't have more different to last year when it was very windy,” said Laidlaw. “This year it was light and puffy and quite difficult. Today was challenging with the wind up and down and in the second race we had a good ding-dong with Bullet – they sail really well. It has been close racing all weekend.”
The regatta wound up with a prizegiving at the RORC's Cowes clubhouse where the winners left laden with trophies and Easter eggs.