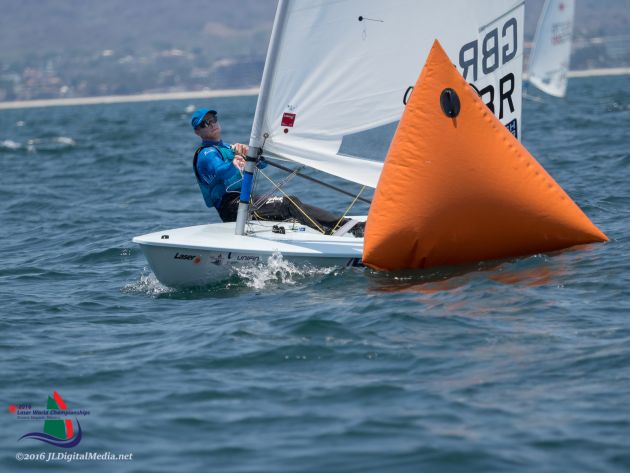 (Nuevo Vallara, Mexico) The 2016 Laser Standard Men’s World Championship at Nuevo Vallarta, Nayarit, Mexico was always expected to be one of the highlights of the sailing year as the world’s top Laser sailors make their final preparations for the Olympic Games in Rio de Janeiro.

Winning a stand-alone world championship in an Olympic class is the ultimate goal for every sailor, apart from a coveted Olympic medal, and is certainly contributing to the pressure before the Games. A good result is not only a morale boosting personal achievement but also a message to your opposition in Rio to beware!

Defending a world championship title is a challenge only a few top sailors ever face, so for Great Britain’s Nick Thompson, returning to the top of the leader board after six races and a difficult day on the water is surely extra satisfying.

Thompson finished first in today’s first race in the Blue Fleet to draw level on points with the overnight leader, Tonci Stipanovic of Croatia sailing in the Yellow Fleet. At the first mark the Croatian looked as if he would match Thompson race-for-race as he led New Zealand’s Sam Meech until the beginning of the second downwind leg when they split tacks. When they next met Meech had the advantage, which he held to the finish.

The second race for both fleets saw the usual southwesterly wind catch out a number of sailors as they expected the right side of the first windward leg to pay as it had in the previous race. The 11 knot wind increased to 13 knots and swung 10 degrees to the left soon after the start. Unfortunately for some the wind stayed left, stranding those who placed their faith in finding a right shift. Amongst these was Stipanovic, who suffered most in the Yellow Fleet rounding the first mark in 21st position, five places behind overnight 5th overall Robert Scheidt.

By the finish, Scheidt had made a good recovery to 8th and Stipanovic mirrored his gain to 14th, which became his discard. Slowly the first leg mix sorted itself out with Kristian Ruth from Norway improving his fourth place rounding at the top mark to take the winning gun ahead of his fellow countryman Hermann Tomasgaard and Philipp Buhl of Germany.

In the Blue Fleet it took three recalls to get the fleet away in a building breeze. The course was more balanced although the fleet still favored the right. Belgium’s Wannes van Laer did the best job of picking his way through the shifts in the center right to lead at the first mark ahead of Julio Alsogaray from Argentina and Australia’s Tom Burton. Meanwhile, Thompson protected the right to round in 7th. Van Laer swapped places with Alsogary on the first downwind as Thompson gained three places.

By the end of the race Burton had taken first place, which with a 4th in the previous race made him the second most improved sailor of the day jumping 11 places up the leaderboard to 8th compared to best of the day, New Zealand’s Sam Meech, who climbed 13 places to 11th overall.

Thompson now has a three-point cushion over new number two, Jean-Baptiste Bernaz of France, going into the final day of qualifiers before the real excitement begins in the finals series when the world’s top 56 Laser sailors race head-to-head.

“Conditions have been perfect,” said Wearn at the conclusion of racing today. “Every day so far we have had 8-17knots of breeze and it's allowing the racing to be as pure as it can get. As you would expect in the final few months before the Games the competition is as high as it gets. Everyone is out there to prove a point, which makes the racing that much tougher and doesn't allow you to make any mistakes.”

“Today was better again,” said Burton as he came off the water.  “Conditions were very similar with the breeze kicking up to 15 knots but dying in some spots and some of the race being done in 10 knots or less at times.

“I had some good starts and some really good downwind legs. Each day is getting better so I need to keep minimising the errors. At the end of the regatta I will be able to reflect and see what went wrong on the first day.”