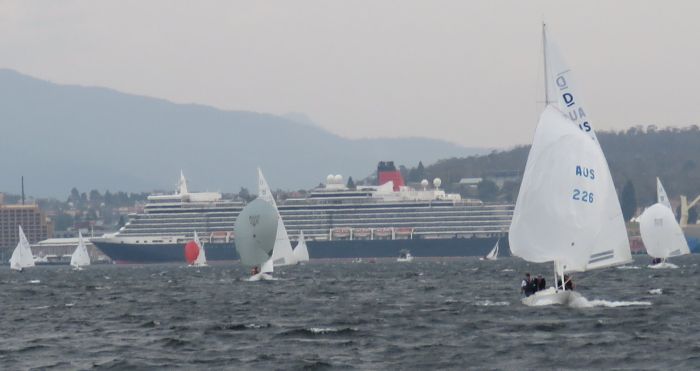 In the last two summers the now 63-year-old has become World Masters and Corinthian champion in the Dragon class and this week scoring an unbeaten win in the prestigious Prince Philip Cup, the Australasian championship for the classic one-design keelboat class.

Tasmania has produced many champion and Nick Rogers must rank among the best, a helmsman of world class talent, whose victories have included world championship titles in Mirror dinghies and International Dragons.

As a match racing tactician, this Corinthian (amateur) sailor has few peers; a winner of the Seawanaka Cup in the USA and many wins in the Australia’s interstate Sayonara Cup.

The Derwent River showed its many faces on Saturday when exposed Dragon fleet to the to the strong sou'westerly wind patterns all the way from Antactica.

The 6th Heat of the 2020 Prince Philip Cup commenced in a lumpy, erratic nor'wester that came and went with the gusts around the mountain.  The first start was abandoned, then 25 minutes later it settled enough for exemplary Race Officer Scott Price to get a start underway in a 15-20 knot breeze from the west.

Xanthos (Mike Wilkinson) had the best start with Karabos IX in the middle of the line and making great speed.  Nick Rogers and his brilliant crew sailed beautifully in the tricky conditions to lead every lap and take the win. Number 6.  Ridgeway followed Wicked to the podium placings.

After three false attempts, Heat 7 got under way in a belligerent sou'wester, varying from 5 – 25 knots.  Ridgeway had the best of the start, but again Karabos IX was in the middle of the line sailing fast in clear air.  And then the first BIG gust hit the fleet, resulting in Tarakona and then Magic retiring.

Karabos IX was in a close second spot to Wicked when the next gust hit and Karobos just carved its way past in a staggering display of boat handling.  However, the spar couldn't resist the pressure and is bent outrageously.

The crew dropped the kite and rounded the bottom mark in the lead, only for the Race to be abandoned as more gusts came through – some over 40 knots and then minutes later to be a nice 6 knots!

So, the current World Corinthian and Masters Champion from the regatta in Perth last summer has won his 12th Prince Philip Cup for the Australasian Championship as a helmsman, along with one as main sheet for Gordon Ingate.

Leigh Behrens, his mainsheet hand, is now an nine- time PPC Champion, with new boy Ollie Burnell up front winning his first.  A truly magnificent effort by them all to win every Heat and convincingly stamp their names on immortal status.

Wicked and Rigeway filled the podium in Heat 6.
Wicked held out Riga on countback (three seconds vs three thirds) on 18 points each to claim the silver medal and runner up.
As International Dragon class historian Leigh Edwards commented: “Even though the result may appear simple, the excellent Karabos IX crew work comes from much practice, the boat is in top-notch condition with fantastic sails and they just get the basics right.  Consistently!”