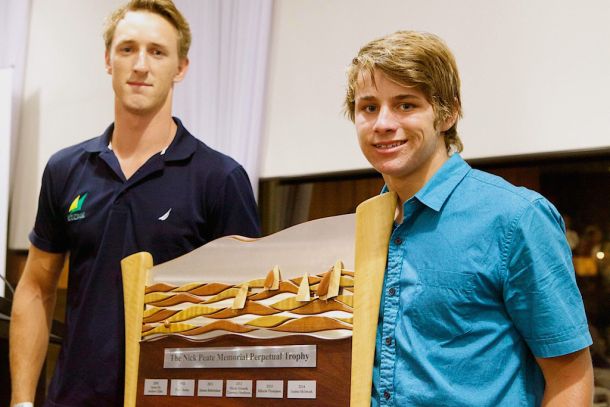 The 2015 Australian Youth Championships, held at Fremantle Sailing Club, WA from 6-10 January 2015, concluded the 2014 Youth Sailing Grand Prix regatta series.  It was the fourth time the series was run since its start in 2010.

The Youth Sailing Grand Prix is open to Australian sailors under 19 years of age and is designed to build a strong national competition that encourages youth participation, providing young sailors with the chance to race at a number of regattas around the country against strong opposition.

“We created the Youth Sailing Grand Prix to provide Australia’s youth sailors with the opportunity to compete in a national series in strong fleets to assist in their continual development,” said Yachting Australia Performance Director Peter Conde. “Australia has a proud history in youth sailing, continually producing young sailors who compete at the highest level and the Youth Sailing Grand Prix is offering additional racing incentive and the opportunity for further developing our up and coming talent” he said.

The 2014 Youth Sailing Grand Prix in the Laser 4.7 girls class was taken out by Western Australian Zoe Thomson, who also won the 2015 Australian Youth Championship, ahead of runner-up Victorian Eleonore Rich.

In the Laser 4.7 boys, winner of the recent class nationals Brody Riley from Victoria finished the Grand Prix series in top position ahead of Jordan Makin from NSW.

In the double-handed classes, Australian Champions in the 420 boys class Alec Brodie and Xavier Winston-Smith won the series ahead of Victorians Nicholas Sharman and James Grogan. In the girls class last year’s winners Dana Tavener and Catherine Pagett (NSW) won the series once again with Sophie McIntosh and Emily Summerell (NSW) following in second.

For the fourth time, the State Trophy was taken home by New South Wales (46 points) with a clear 23 point lead over Western Australia (23 points) in second and Victoria (17 points) in third.

Ben Wade sailed the Laser 4.7 and was nominated by the Race Officers for this award for showing great resourcefulness and resilience. He saved to buy his own laser, an old boat for $400, to be able to race at the class nationals in his hometown of Mandurah and then at the Youth Championships.

During the regatta he was involved in an incident with an official boat that left a hole in his boat. He showed great resourcefulness and resilience to repair his boat as best as he could and get back into racing.

About the Nick Peate Memorial Trophy

Nick Peate won the 2008 Australian Youth Championship in the 29er but sadly passed away before he got to compete the ISAF Youth Sailing World Championships.

The Nick Peate Memorial Award aims to recognise young athletes for the values of fair play and sportsmanship and is awarded each year at the Australian Youth Championships to recognise the values that Nick held dear.

About the Youth Sailing Grand Prix

The 2014 Youth Sailing Grand Prix series concluded at the 2015 Australian Youth Championships, which will be held in NSW at Woollahra Sailing Club from 10-14 January 2016.