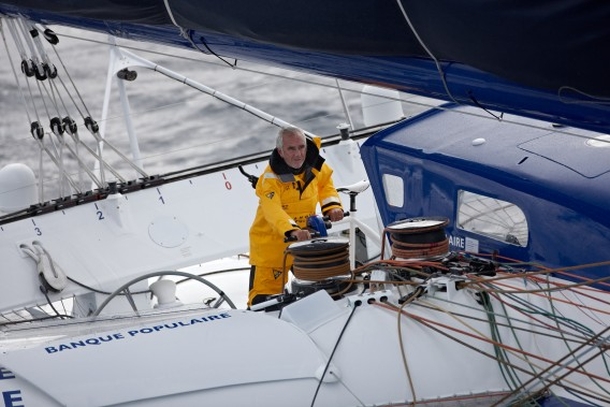 Following the Maxi Banque Populaire IX’s capsize in the early hours of Saturday morning during her delivery down to the Mediterranean, all the teams involved in the Nice UltiMed, together with the City of Nice, are giving Armel Le Cleac’h and Team Banque Populaire their support.

Armel was one of the first skippers to announce his commitment to the race some months ago. He was thrilled at the prospect of participating in the Nice UltiMed with a crew perfectly tailored for the sprint around Corsica, Sardinia and the Balearics. He insisted that he would be present when the race was first announced in Paris back in December.

Though the winner of the last Vendée Globe won’t now be able to compete on the water against the other monsters of the seas, he will still be in attendance to support what is a major first in the Mediterranean, and a meeting eagerly awaited by the locals in Nice, with whom he’ll share his passion for these unique and extraordinary boats.

“We’re offering Armel and the whole of Team Banque Populaire our full support as they have suffered a cruel blow after months and months of work creating this fantastic maxi-trimaran. We’ve been progressing hand in hand with Banque Populaire since the start of the Nice UltiMed project. Above all, we are relieved that no one was injured in this capsize. Since the accident was announced, we’ve been in contact with Banque Populaire’s teams and we’re delighted to learn that Armel will be accompanying us on shore during the event,” comments Jean-Baptiste Durier, Director of the Nice UltiMed.

Armel Le Cléac’h will give his first press conference since the capsize of the boat on Monday 30 April at 11:00am in Nice’s media centre. He will also be alongside the Mayor of Nice, Christian Estrosi, to give the start of this first edition on Wednesday 2 May at 1:02pm, from the Rauba Capeù headland, between the Promenade des Anglais and the Port of Nice.