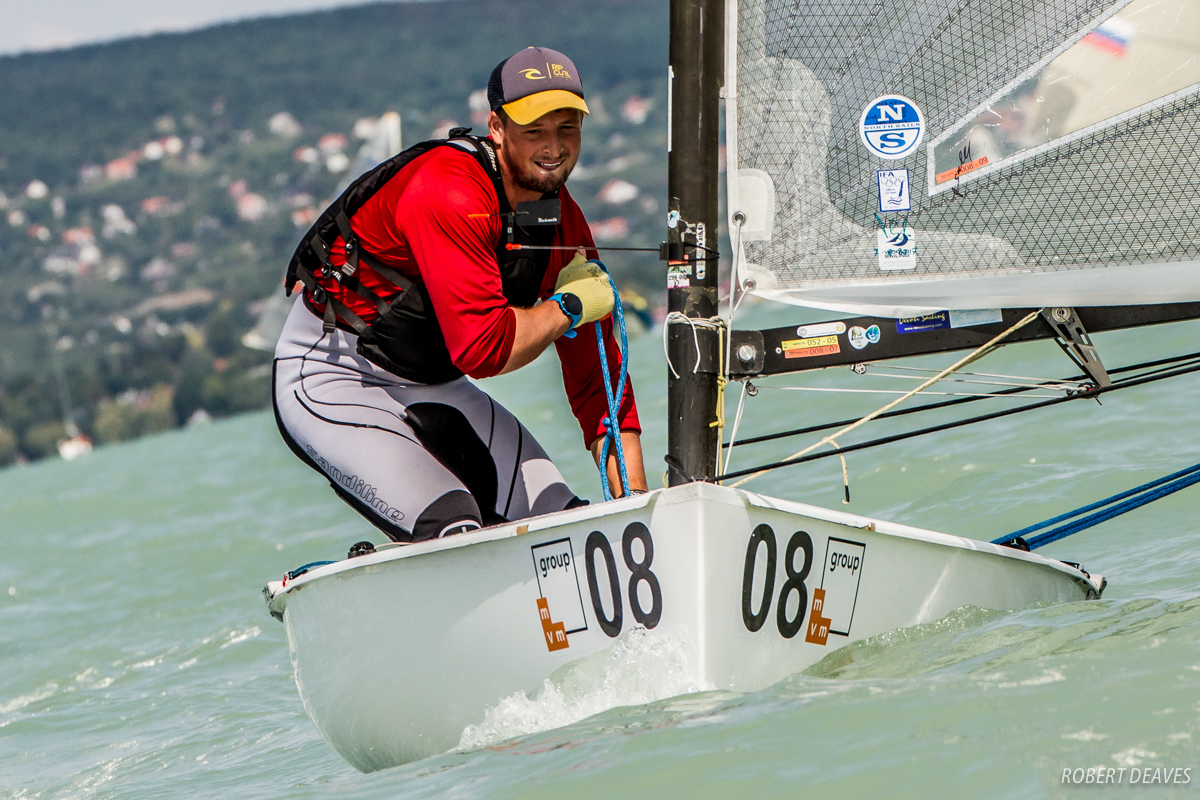 The only young sailor at the U23 Finn World Championship in Balatonfured with Olympic experience, Facundo Olezza, from Argentina, made some sense of the chaotic wind conditions on the first day to build a 13 point margin after three very tricky races were sailed.

The British sailors, Henry Wetherell and Hector Simpson are second and third, though the points are very close. The race wins on the opening day went to Olezza, Ondra Teply from Czech Republic and Arkadiy Kistanov from Russia.

The wind on Lake Balaton today was kind of what everyone expected. But it still surprised with its variability, ranging from 2-15 knots and shifting 40-90 degrees at times. Several times the sailors were seen doing straight line tacks.

Defending champion Phillip Kasüske, from Germany, started his defence in the best possible way by leading round the first mark. However it was short lived with Olezza moving ahead downwind and controlling the fleet from the front to take the first race from Oskari Muhonen, from Finland, and Kasüske.

Teply made up for a capsize in the first race with a win in the second. He rounded the top mark in third behind Olezza and Simpson and the three extended on the fleet. Olezza still led around the final windward mark after a mind numbingly shifty second beat, but then both Teply and Simpson sailed round him for the top three.

Teply commented, “It was a very tricky and shifty day and also we had huge gaps sometimes we had 15 knots and sometimes 2, and it was hard to predict, and difficult to chose where to go.”

“I managed to win one race because I was on the good side and still in the wind, so it was easier then and I had a good last downwind so managed to pass two boats.”

“I made one good race but it was not a great day for me as I also had two 16th places. I think I could have done worse but I was hoping to make all the races top 10 and stay consistent, but I didn’t make it.”

If Race 2 was tough, Race 3 was about to get even tougher. With a huge split in the fleet on the first beat, the boats on the Tihany shore looked like they were pointing at the mark while on the opposite side Krzysztof Stromski was several hundred metres detached from the fleet. When he finally tacked, he crossed back ahead of the entire fleet to round in first from Fionn Lyden, of Ireland, and Kistanov. Oscar flag was raised at the top mark for the first time but predictably the wind died soon after and the fleet sailed the run in 2-3 knots with free pumping. Kistanov took the lead at the gate and pulled away nicely as the wind came back in from the left, leaving those on the right stranded. He held his nerve to win the race making up for a UFD and a 30th in the first two races.

Second overall after three races, Wetherell said of the day, “It was a really shifty, gusty day but that was expected. But when you are out there you get to see how shifty it really is so I am quite happy to come away with three counting results today. A lot of guys had some big scores, so I am just trying to keep in the game for now and keep it consistent.”

“You have to constantly look out of the boat. It’s not really a speed day. Just looking around and finding some pressure to get into. Some it is luck and some of it is skill.”

After a bronze medal last year Olezza has since put an Olympics under his belt and was clearly making good decisions today without taking too many risks. A lot of sailors picked up starting penalties, Rule 42 penalties or took too big a risk on the course and paid the price with a high score.

“Today was a hard day and very puffy, so it was essential to find the right pieces of wind that were coming through the land. I think I was just a little bit lucky that I was in the right spot.”

“I think this regatta will have a lot of big numbers in the end so I am just trying to go race by race and just focus on the gusts. It’s very hard. You don’t have a pattern to follow in this kind of place so you just try and be in the right spot and be very aware of what’s happening.”

“The youth Finn fleet is very strong and we have a pretty big number of sailors now so any small mistake can cost you some points.”

Three more races are scheduled for Wednesday, but anyone looking at the wind forecast for the rest of the week will see a lot of small numbers.