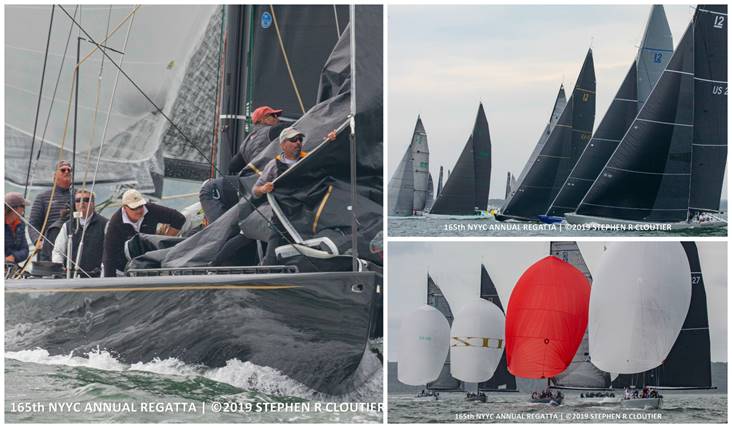 Hosted by Ida Lewis Yacht Club, the 12 Metre-only event provides one of the last formal opportunities for teams to fine-tune skills and also counts toward standings in the global ROAD TO THE WORLDS WAYPOINTS Series, which has helped build competition in the Northern Europe, Southern Europe and Americas Fleets.

“The game is afoot,” said Americas Fleet President and Event Chair for the Worlds Peter Gerard, explaining that points for the WAYPOINTS standings have been accumulating since 2017 and currently show American Eagle (US-21), Challenge XII (KA-10), Courageous (US-26), and Victory ’83 (K-22) – all from the Americas Fleet – in the final hunt for the series trophy, which will be awarded at the conclusion of the 12 Metre World Championship to a single team with the highest overall point score (among all divisions) for the past three seasons.

“The Worlds are part of the WAYPOINTS Series as are the 12 Metre Pre-Worlds Regatta (part of Sail Newport’s Newport Regatta, July 6-7) and the New York Yacht Club’s 165th Annual Regatta, which was held last week. At that latter event, we really got our first glimpse into just how competitive the 12 Metres are going to be on the World Championship stage.”

At the Annual Regatta, where six of the Modern 12 Metres competed together, Challenge XII, skippered by Jack LeFort (Jamestown, R.I.), won with a three-point lead over Courageous, skippered by Ralph Isham/Alexander Auersperg and helmed by Arthur Santry, Newport, R.I. Courageous finished second on a tiebreaker with Victory ’83, skippered by owner Dennis Williams, and just one point behind them in fourth place was Enterprise (US-27), which has been chartered by Clay and Nancy Deutsch (Newport, R.I.) for the Worlds and was racing in its current configuration for the first time.

“At almost every finish we were overlapped with one or two or three boats, and there couldn’t have been more than 15 seconds separating first from sixth,” said LeFort, who won two of the four high-breeze races. “All the teams have stepped it up this year, so any boat can win any race. It’s going to be an unbelievable summer of racing…very cool.”

Challenge XII, designed by Ben Lexcen, was commissioned by Alan Bond as a possible Australian challenger for the 1983 America’s Cup. LeFort bought her in 2017, completed most of its renovation two winters ago, and with is current crew has been practicing for the Worlds for three years.

“We love the boat and we want to continue racing it beyond the Worlds,” said LeFort. “The other 12 Metre owners are jazzed to do the same, and the boats are so well restored now, it would be a shame not to keep the enthusiasm and momentum going.”

In its first regatta experience, Enterprise turned a shaky beginning into a clear promise that the new kid on the block will be a threat at the Worlds. After an extensive multi-year refit, Enterprise was recently donated to the U.S. Merchant Marine Sailing Academy. She splashed only weeks ago when Clay Deutsch, who has won past 12 Metre World Championships with both Weatherly (US-17) in the Traditional division and Freedom (US-30) in the Modern division, took charter possession of her and formed his team of veteran sailors.

At the Annual Regatta, the team broke two jibs and a main on Friday (in the Around the Island Race that is scored separately from the Annual Regatta) and made one mistake after another in Saturday’s single race.

“On Saturday night, we had an ‘exorcism’ by a bonfire where we burned some old stuff and had a group chant; it was pretty spiritual,” laughed Deutsch. “On Sunday there were encouraging signs for sure when we won two races. We were either awfully lucky or it was real progress. The boat is fine; we just need to figure out how to sail it and get that last bit out of her. The learning curve is insane.”

In Traditional Division, American Eagle prevailed over its two Traditional counterparts Columbia (US-16) and Nefertiti (US-19), in second and third, respectively. In Grand Prix, New Zealand (KZ-3) won all of its four races to win overall against Kiwi Magic (KZ-7).