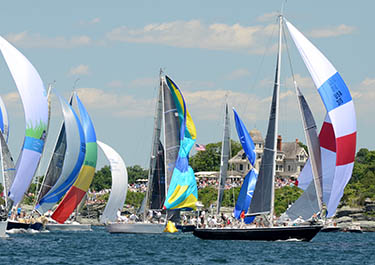 When the Newport Bermuda Race is next sailed in 2016, it will be scored by one handicapping system, the Offshore Racing Rule (ORR).  The ORR calculates each boat’s speed potential based on its dimensions, using a Velocity Prediction Program (VPP).  The ORR has been used in the Newport Bermuda Race since 2006, following many years of handicapping under other VPP systems.

The announcement was made by Race Chairman A. J. Evans (Red Bank, NJ).  He noted that the 2016 race will be a double anniversary year for the Newport Bermuda Race.  It will mark the 50th “Thrash to the Onion Patch” since the biennial race was founded in 1906.  The nickname honors Bermuda’s agricultural history and the typical demanding sailing conditions on the 635-mile race course across the Gulf Stream.

The “50th Thrash” will start on June 17, 2016, off Castle Hill, at Newport, R.I.  In the most recent Newport Bermuda Race, in 2014, 164 boats sailed in divisions for racing-cruising boats, cruising boats, doublehanded boats sailed by two sailors, and Grand Prix racing boats with professional sailors.