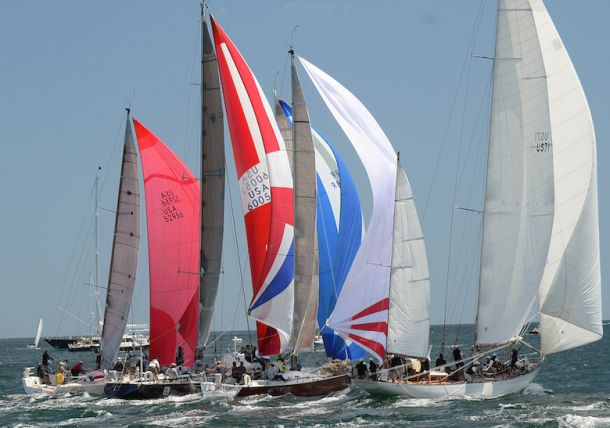 From Black Watch to Nasty Medicine... ORR aims to promote participation and fairness across a broad spectrum of boat designs. Photo © Talbot Wilson.

Newport RI- March 23, 2016: The June 17, 2016 Newport Bermuda Race, the 50th Thrash to the Onion Patch, is shaping up to be the largest since the 2006 Centennial celebration. The call for Applications for Entry (AFE’s) in the ocean classic went out January 12 and just over two months later the race is almost fully subscribed. As of March 18, organizers had received 210 AFE’s and invitations to enter had been extended to 188. The remaining 22 have incomplete applications or need to satisfy qualification questions before they will be invited.

The entries for this edition of the Newport Bermuda Race are limited to 200 yachts. About 10% more invitations to enter will be issued to account for the normal rate of attrition experienced in recent races. The Application for Entry deadline, without substantial penalty, is April 1st. That’s right there on the horizon. See Bermuda Race Entry for all the necessary information.

“We are building a spectacular fleet for our 50th race,” said  Chairman AJ Evans. “To date 117 boats in the system are returning racers. On top of that there are 85 new entries. That is a fantastic 42% of the fleet who are new to the Newport Bermuda Race. We at the Bermuda Race Organizing Committee— members of the Cruising Club of America and the Royal Bermuda Yacht Club— are proud that this classic ocean race continues to attract new sailors and new boats.”

“In 2016, we will have some high profile entries to announce as their applications are cleared through the system,” Evans added. “This year there are more big grand prix racing boats over 70 feet, and we have interest from several Super Maxis and Spirit of Tradition boats. The smallest boat in the system is 34 feet, the largest is 100 feet, the average is just under 50 feet. The majority of the fleet, as always, are our traditional Cruiser Racer types and pure cruisers… 95% of the boats are amateur driven Double Handers, Cruisers and Cruiser Racers.”

Because of the large fleet, the Royal Bermuda Yacht Club and the Royal Hamilton Amateur Dinghy Club marinas will be more crowded than in the past few races. Skippers should reserve berths now. The Bermuda Berth Reservation forms for the RBYC and the RHADC are online on the Official Newport Bermuda Notice Board.