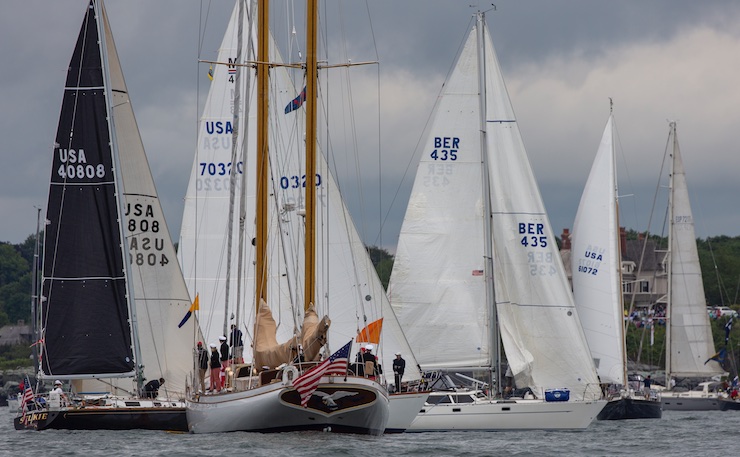 Lining up for the start of the Newport Bermuda Race

The combination of a light south-east wind and more than a knot of current flowing out of Narragansett Bay pushed the fleet of boats starting the 51st Newport Bermuda Race on their way towards Bermuda on Friday afternoon, with few incidents of note.

“In spite of the light conditions,” said Jonathan Brewin, chairman of the Bermuda Race Organizing Committee, “the New York Yacht Club race committee did a stellar job of starting our 17 classes safely.”

Only one boat among the 170 entries in the race failed to start, Araucaria, a 55-footer sailing in the Finisterre Division for amateur boats using cruising sails.

Setting a pre-race course past Whitehawk, the 105-foot starting line boat anchored in the East Passage, a misjudgement of the strong current resulted in a collision between the boats and the retirement of the smaller vessel.

During the starting sequence, a McCurdy & Rhodes 38-footer named Selkie came too close to Whitehawk and was hung up for a while on Whitehawk’s massive bowsprit. Fortunately, after taking its penalty turns, Selkie was able to continue with the race.

The most exciting start was among the largest boats in the fleet, Class 15 in the Gibbs Hill Lighthouse Division. In this group of high-tech, high-speed, professionally crewed boats, the 88-foot Rambler 88, a former record holder for the Newport Bermuda course, started a little behind several smaller boats and made a breathtaking pass, threading its way right through the middle of the closely packed fleet.

The race continues for the next three to six days. How long depends on the size of boat and the strength of the winds between Newport and Bermuda.

Currently, the forecast is for lighter winds. According to Brewin, “Preliminary projections are for a very strategic race, which could involve several ‘restarts’ when the wind dies and the fleet compresses.”