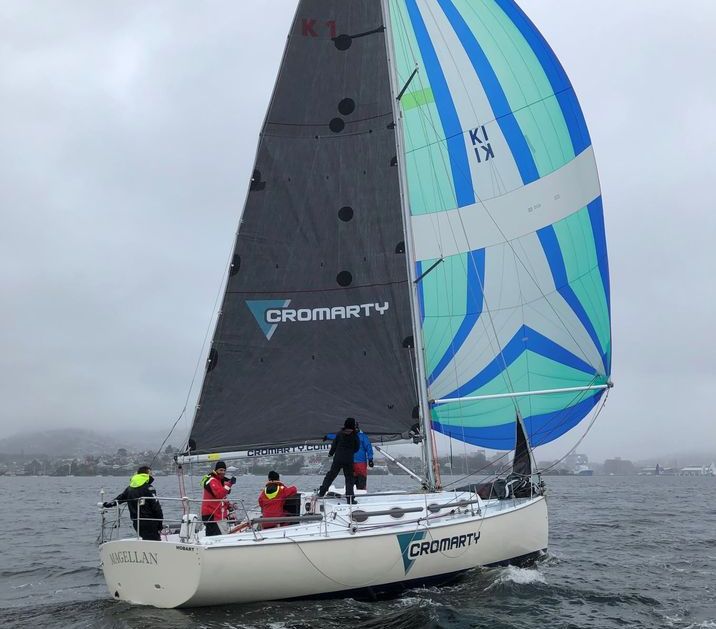 Race three of the Combined Clubs Winter Series on the Derwent yesterday produced four new race winners on a morning of challenging sailing in steady rain and an 10-12 knot south-easterly, an unusual breeze for this time of the year.

The sou’-easter did, however, allow the Royal Yacht Club of Tasmania to set a good windward/leeward course as the breeze freshened with gusts to 20 knots.

Divisions 1 and 2 sailed down to the Nutgrove Beach mark, Division 3 and 4 had the DSS permanent buou as their leeward mark.

Oskana, Mike Pritchard’s Cookson 50, took line honours and placed eighth on corrected time but still heads the pointscore for Division 1, just one point ahead of Whistler, with another point to Jazz Player (John Pritchard).

Graham Hall’s Serenity gave a win for the host club of the day, the RYCT, a Van De Stadt designed half tonner winning Division 4 from Sundance (Don Bailey) and the famous 46-year-old Huon Chief (Peter Farley).

Huon Chief has returned to racing after decades as a cruising boat with Farley, the RYCT bosun, scoring his first race placing since acquiring the former one ton champion earlier this year.

The J24 Another Toy (Michael Kennedy, DSS0) heads the Division 4 leader board with 9 points; Motley (Stephan Lubach) is on 11 points and Zest (Matt Westland) on 12 points. Today’s race winner, Serenity has 14 points on the board and is fourth in standings.