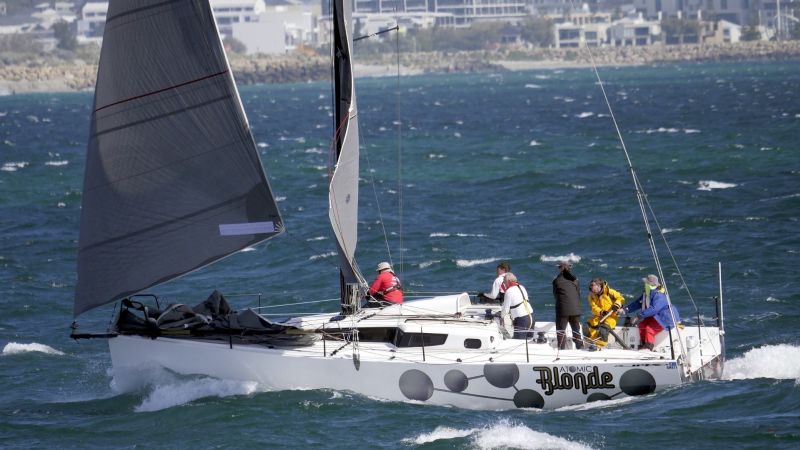 Anyone knowing Dr Simon Torvaldsen realizes his eye for detail and his passion for yacht racing.

After several years of success in his S&S 34 Blondie, he really wanted to step up in performance and race a boat that could continue to beat the competition for years to come.

After extensive research around the globe looking at all the possible contenders, and sticking to his budget, he decided on the French brand of JPK. He decided on a JPK 10.80 and his Atomic Blonde became a reality.

After some of the usual tweaking, the IRC racer is now in its second season and is making Dr Simon’s podium dreams a reality.

Dr Simon refers to his well-established crew on Atomic Blonde using the cliché of a “champion team rather than a team of champions”. They are now showing their understanding of the JPK 10.80 and its capabilities in all conditions.

“In the recently sailed four race Winter Series off Fremantle we had anything from 20 knots to drifters, with the courses providing a real challenge with the unpredictable on and off wind conditions. The boat sailed really well in all conditions and in particular our upwind performance in the light airs was excellent as we all know she is a flyer on and off the breeze in heavy airs,” Dr Simon said.

Atomic Blonde placed First Overall IRC in the Winter Series, winning over all Divisions in a very competitive fleet.

“The JPKs are a great yacht to sail and they perform really well to their IRC rating, as they have shown with their consistent winning results in the tough racing that the European and UK regattas toss up. We were thrilled with our placing across the line in all four races, charging in on the larger yachts and getting the best of the usual tussle with the Sunfast 3600.

“I had considered Hobart but unfortunately the current crisis has put those plans on hold for another year. I look forward to some class racing as more JPK’s come into the fleets around the Asia / Pacific.”