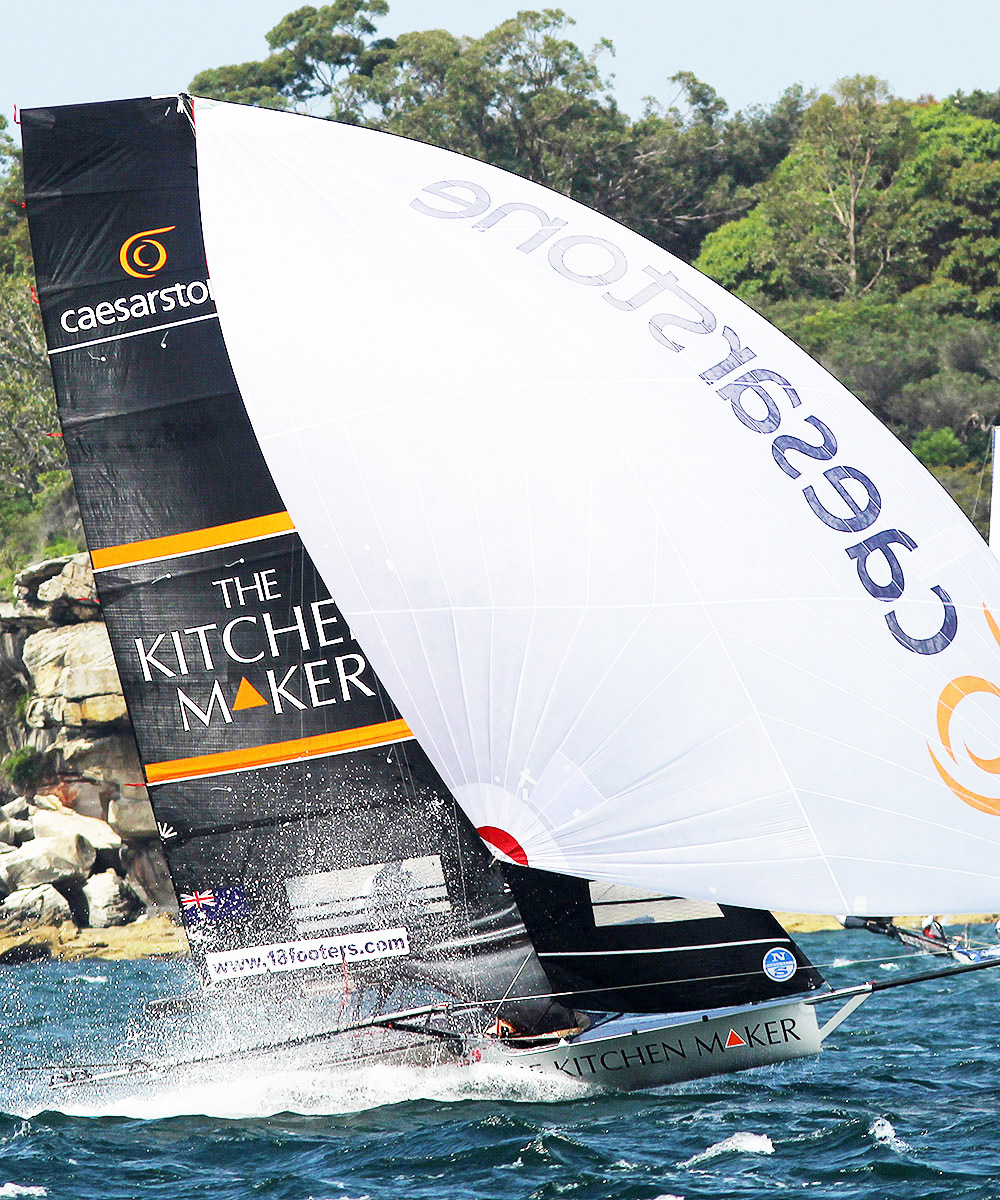 Can The Kitchen Maker-Caesarstone team beat their more experienced rivals on Sunday?

One of the highlights of the Australian 18 Footers League’s 2018-2019 season has been the emergence of a young The Kitchen Maker-Caesarstone team as a leading contender for the top honours in the major championships on Sydney Harbour.

Skipper Jordan Girdis, sheet hand Lachlan Doyle and for’ard hand Tom Quigley were all rookies in the 18s just two years ago, now they are only one point from the lead heading into the final weekend of the 2019 Australian Championship.

Jordan and Lachlan are now having their third season together after joining the 18s in 2016-2017. Along with Nathan Edwards, they won the 2017-2018 Spring Championship in Panasonic Lumix and were rewarded by a move into their current skiff, The Kitchen Maker-Caesarstone.

Tom Quigley came into the 18s at the same time as part of a crew skippered by his father, Stephen Quigley.

Steve is not only a former JJ Giltinan (world) champion, in 1996 in AEI-Pace Express, but is one of Australia’s most respected yachtsmen. He has been in a technical and performance advisory role, sailing with the incredibly successful Sydney-Hobart maxi, Wild Oats XI team for the past six years.

Tom was a member of the 2017-2018 NSW Championship-winning The Kitchen Maker-Caesarstone team, which was led by former JJ Giltinan champion Scott Babbage, who is now sheet hand on another top contender, Bing Lee.

When Girdis and Doyle moved into The Kitchen Maker-Caesarstone, they joined with Tom for the first time and the new team immediately showed its capabilities with some consistently impressive performances.

The final two races of the nine-race Australian Championship will be sailed on Sydney Harbour next Sunday (17 February) and the title is still very much up-for-grabs with only four points separating the top five teams.

With such a narrow spread of points over so many teams, the result must come down to the final race on Sunday – probably even the final leg of the course in the last race.

Despite conceding experience to each of their main rivals, Jordan Girdis and his team are not over-awed by the challenge

“With all the top boats so close, everyone will have to be on top of their game, nothing is certain.”

“The nationals have provided a range of breezes, from drifter to survival conditions.”

“We have worked hard on our manoeuvres, which has opened up a lot more options over the racecourse.”

“It really could come down to some match racing in the final heat. Bring it on.”

As for the team’s future, Jordan says: “We are very happy with our improvement, but the good thing is that we still feel like there is a long way to go.”

Although the lead is small, James Dorron and his recently-crowned NSW champion team on Asko Appliances must be confident of adding the national title to the state crown, but Dorron is not ‘speaking up’ the team’s chances.

“It’s good racing for all teams at the moment and the Australian Championship shows this with five boats in contention with two races to go.”

“It could go either way for all five teams and we (Asko Appliances) know that, given that we came back from three points behind on the last day to take the state title.”

“Looking forward to Sunday, it will be good for the spectators and, hopefully, things go our way.”

The variety of wind conditions during the championship has been incredible.

On Day 1 there was very little wind, then on Day 2 the fleet was battered by a 25-30-knot Southerly. Day 3 produced the best conditions, a 17-20-knot North East breeze, before it was back to 5-12-knots last Sunday.

For the final two races, early predictions are for 18-20-knot North-East winds, and a fine sunny day, which should provide the spectator fleet with some tremendous 18ft Skiff action.

Whichever team eventually becomes the 2019 Australian champion will have really earned the victory and given it a great boost of confidence for the JJ Giltinan Championship, which will be sailed on Sydney Harbour from March 2-10.

For those who can't make it onto the water, live streaming is available on 18FootersTV