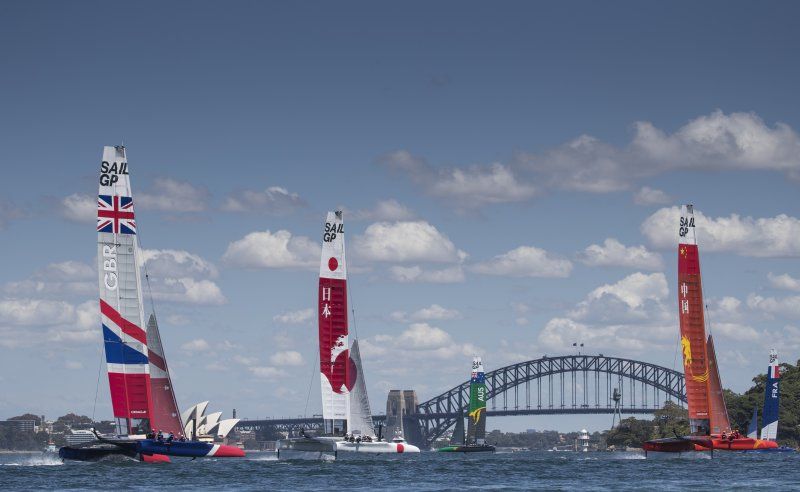 Picking a winner in the new SailGP series, which starts tomorrow on Sydney Harbour, is a fool's game. At least, that's the concensus after watching the final practice races and speaking with the skippers.

Not only are the boats very strictly scrutineered to ensure they are identical, but all data from all boats is shared among the six teams.

As Phil Robertson, skipper of the Chinese boat, said at today's media conference, “We can see exactly when Tom (Slingsby) is pushing the button to tack. We go out the next day, push it at exactly that time, and our tacks improve.”

Slingsby said that the scrutineering is so intense, even a sticker that the Australian crew used to identify “up” and “down” had to be removed and replaced with one that was labelled the same as the other five boats.

“When we arrived, Nathan (Outteridge) and ourselves expected to have a gap over the other four, because we sailed these boats in Bermuda. But because they're getting all our data on things like rudder lift angles, it's really anyone's race.

“USA was out the back in the fleet races today but beat us by a mile in the match race.”

Slingsby and Outteridge both said that the 6-8 knot variable winds today weren't ideal for racing.

“We tacked in some strange places today,”Slingsby continued. “Jas (Waterhouse) saw something on the water ahead and we tacked and picked up big gains. It's that sort of course.”

Asked about the difference between these SailGP boats and the original America's Cup set-up, Outteridge said that it's now easier for the grinders. “They were pushing oil in Bermuda (to power the hydraulic systems which controlled the wing sails and daggerboards). Now it's a more traditional role, grinding the sails.

“For the driver, they're more unstable. The light air foils are smaller which makes trying to take off more challenging.We had three different winners today. If we get more wind, there might be more order in the fleet. We had some good battles with Australia and that's likely to continue.”

The old sailor's superstition that if you win a practive race you won't win the main event doesn't seem to have taken hold among the skippers here. There were three different winners, with Australia topping the overall leaderboard.

“We only won one,” was Slingsby's reaction.

“Someone's got to win them,” was Outteridge's response.

Unless the wind picks up significanlty, which is not what's forecast, we may see lots of different winners over the next two days.

And that will be a great way to start what promises to be an enthralling sailing event.

The races will be broadcast live on Fox Sports from 4pm on Friday and 3pm on Saturday.