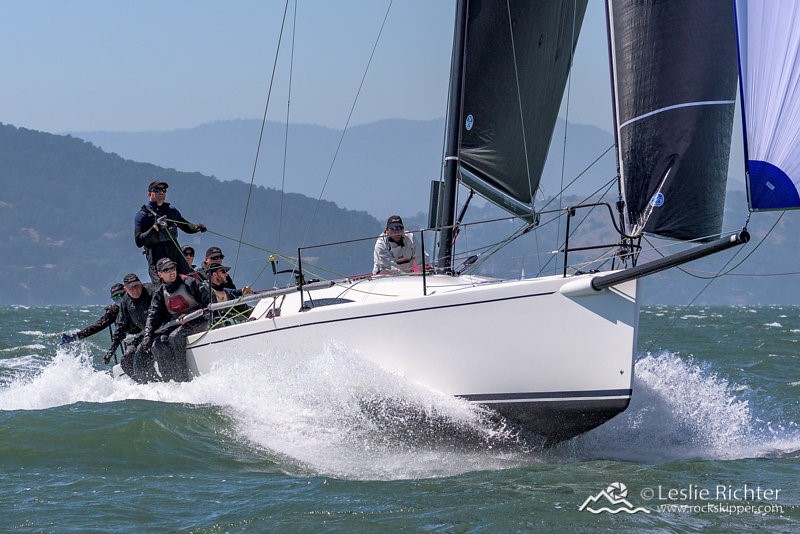 So excited is Rob Date about his newest Scarlet Runner that he’s entered the J111 in the one design division of the 175th anniversary Festival of Sails 2018 before it’s arrived in Australia. In doing so Date was badged the 50th festival entry for which he gets zilch but a story written about him.

Date bought off the plan and while technically it’s the tenth in his series of boats called Scarlet Runner, it’s been named Scarlet Runner 11 to fit in with the whole 11 theme of the J111, pronounced J one-eleven, and sail number SM11, which Date has retained from his Reichel Pugh 52 big boat days.

He’s also reversed the colour scheme back to the RP’s, red with black running beans – as in spinnaker graphics of beans with faces and running legs – rather than the opposite black with red beans of the Adams 10 he also owns.

The name Scarlet Runner originates from a boat the family discovered in a paddock nearly 50 years covered by a climbing bean plant, and subsequently purchased.

Up to six J111s, five Victorian and one from South Australia, are expected to race in their own division at the Festival of Sails 2018 presented by Rex Gorell Land Rover, January 26-28. “There will be at least five of us so it becomes one design racing; we can forget the handicap system and just sail one on one,” Date said.

On how he came to own a J111 he recalls, “I got badgered into buying one, and I probably have aspirations to go to world championships.” When Rod Warren’s Joust came so close to taking out the world championship on San Francisco Bay this year, Date was inspired. “As a result of that I ordered one and it’s arriving this week. We are hoping to be ready for the Lipton Regatta on November 18th at the Royal Yacht Club of Victoria.”

At 36 feet the J111 is just trailerable and Date has already spoken with the truck driver who moves his Adams around, to trailer the boat from Melbourne all the way to the north east Queensland coast for next year’s Airlie Beach and Audi Hamilton Island race weeks.

On the style of racing he believes he’s in for Date said: “Essentially it’s a high performance cruiser/racer that operates around the speed of a Sydney 38. Principally they are an upwind rather than a planing boat, with a fair bit of rocker and asymmetric kites.”

J-boat dealer Ray Entwistle offers a different view: “The boat is stunning downwind – a demon – and the numbers are amazing. One of my crew saw 23.6 knots on the dial in a 30-knot southerly on my boat.”

Owner of Joust for three years, Rod Warren, meanwhile says the J111 is a good all-rounder. “We’ve done the last three world championships in Newport, Cowes and San Fran and it’s a great boat in big breeze – that’s what we are hoping for on Corio Bay, plus flatwater. Royal Geelong Yacht Club’s been good enough to give enough to give us our own start.”

The Melbourne sailing scene he says is made up of small numbers of everything and everything diminishing, and the one design convert sees the J111 sitting in a sweet spot. “We need more concentration of fleets on the bay (Port Phillip). The handicap systems struggle to compare boats that are different; the only way to compare to compare apples and apples is to make them all apples,” he believes.

The remaining divisions now open for entry cater to all other sailing interests – the hard-core Rating Series owners and crew coming off the back of the Australian Yachting Championships at Sandringham, cruising with spinnaker and cruising without spinnaker, Super 11s and 12s, classics and multihulls. Making a return in 2018 are the trailables in two divisions, one pointscore including the Melbourne to Geelong Passage Race on Australia Day and the other for inshore only.

Online entries close Friday January 12, 2018 at midnight and thereafter a late fee of $250 may apply up until the final closing date of January 16.

The Festival of Sails 2018 will run over the traditional Australia Day weekend timeslot of January 26-28 and RGYC, Victoria’s 2017 Yacht Club of the Year, has reduced entry fees across all divisions for the 175th anniversary edition.