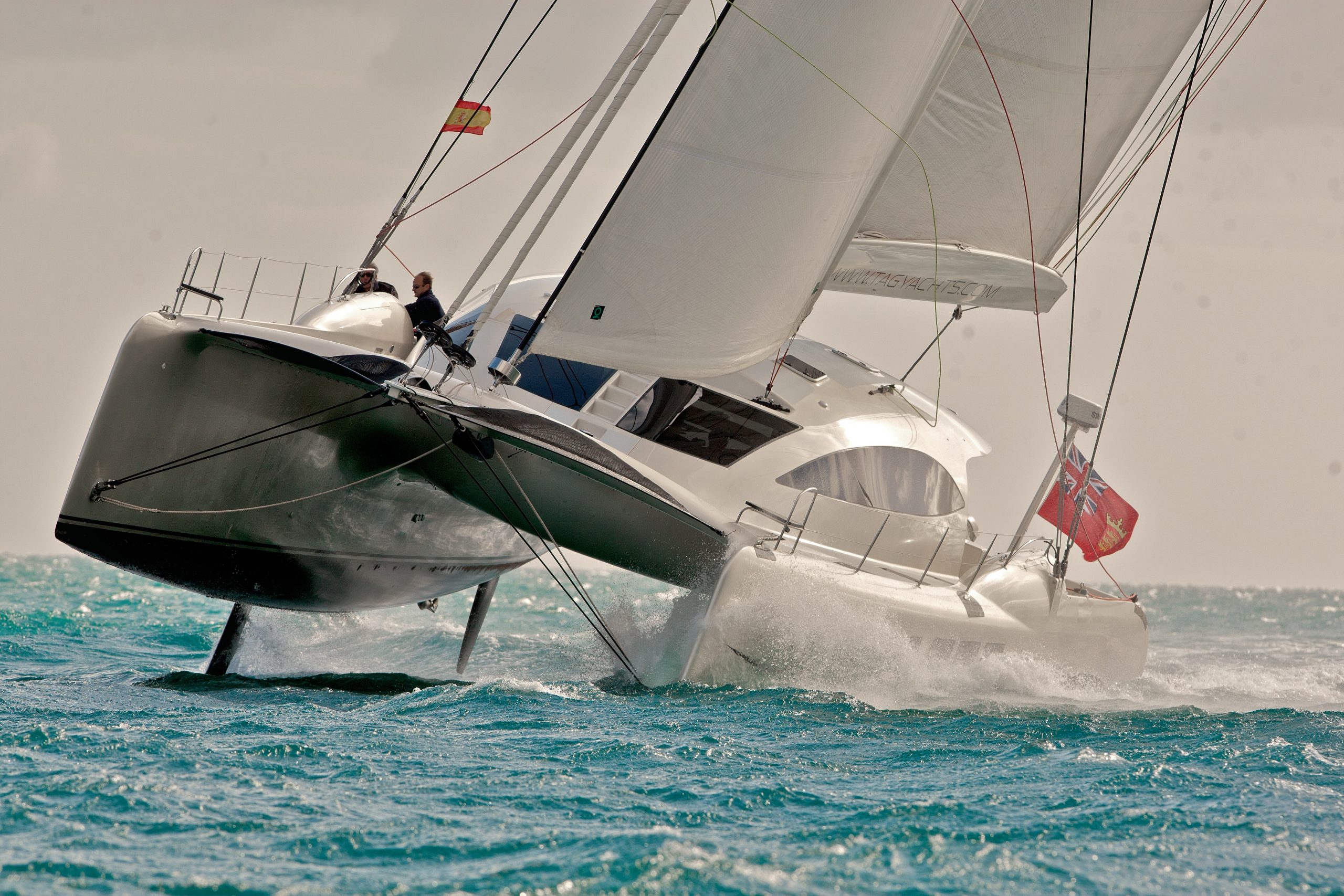 Over the past 10 years, the market for cruising multihulls has been growing steadily. With more room, more comfort and more speed than a similar-sized monohull, the only real drawback has been the lack of marina berths and the costs associated when one is finally found.

It is obvious that the theory of two hulls being better than one is finding its way into the racing scene too. Even ignoring the America’s Cup, the Extreme Sailing Series and all the offshore record-holders that operate at the pointy end of the racing scene, a glance at the entry lists for any regatta week around the world will show that the multihull division is often the fastest-growing.

At present most regattas have just one multihull division and that can make life difficult. I recall attending the Bay of Islands Regatta in New Zealand a few years ago where time limits had to be adjusted because Simon Hull’s huge ORMA 60 TeamVodafone was lapping the cruising cats, which had no chance of finishing within 20 minutes of the big beast.

As with the two most widely-recognised monohull handicap systems, IRC and ORCi, multihull event organisers have several different rating models to choose from. The Dutch Texel system, for example, uses a wide variety of measurements of hull length, beam and weight along with sail area, with consideration also given to the sails carried, such as spinnakers, genoas and screechers.

The increasing level of multihull entries will hopefully see at least two divisions at the bigger regatta weeks. Meanwhile, multihull importers tell us that they are getting enquiries for “performance cruising cats” from people who want the comfort of a stable platform when cruising but also want to do well in races.

We decided to look at the market and have reviewed three designs that tick all the boxes.

South Africa has a good reputation in multihull design and build so it’s no surprise that one of the leading contenders comes from there. TAG stands for Tim and Greg. Tim van de Steene is the CEO and Greg Young is the designer of a range of fast cats which includes 33, 50, 60 and 72 foot.

The third TAG 60 has recently been launched and the factory’s aim is to produce between seven and ten a year. This big cat was designed as “the ultimate world cruiser” but has a top-end package that is all about speed.

Multihull Solutions are the Australian and New Zealand agents for the marque and managing director Mark Elkington says the TAG 60 is “all about weight and hull design”.

Even in the cruising version, which displaces 10 tonnes, a lot of carbon is used to keep the weight down. The spacious interior, described as having an Italian apartment feel, uses carbon and white and pink beechwood finishes with a lot of leather and other “luxury” materials.

The boat features three double cabins, a bunk cabin and three bathrooms and the galley and entertaining areas are well-designed for ventilation, light and sensible traffic flow.

When racing a cat of this size in Noumea a few years ago, one of the prime differences I found over a monohull was poor visibility. That’s been addressed in Greg Young’s design, with the helm position giving an excellent view ahead for holding a steady course, above for trimming the sails and to either side for berthing. TAG says the 60 is able to be handled easily by a couple. She is capable of making 300nm a day when cruising, getting you to your destination faster.

That’s impressive, but for those who are serious about racing, Mark Elkington says the 60 has a racing option that moves performance to a new level.

“The entry level (GT) model easily achieves 85% of true windspeed. But when you drop the displacement from 10 tonnes to 7 tonnes, fit the rotating carbon mast and $400,000 worth of load-cell technology, you’ll easily sail her at 115% of wind speed.”

The load-cell technology is essential on the racing version because loads build so quickly that no human can react quickly enough. Load sensors are placed in strategic places on the rig and hulls and when the safety margins are exceeded power is automatically dumped, easing the strain.

The design speed of the XR model is 30 knots and she will fly a hull in 18 knots of breeze.

For more details go to www.multihullsolutions.com.au.

The Outremer brand has been around for 30 years, with a design philosophy of building simple, safe and fast catamarans targeted at the offshore market. According to Multihull Central CEO, Brent Vaughan, the idea is to dramatically shorten the passage time between destinations, but still have a comfortable platform to
live aboard.

Vaughan says that in the last seven years the Outremer fleet has been rejuvenated with three new designs – the Outremer 45, Outremer 51 and the 59ft Outremer 5X. Both the Outremer 49 and 5X have won European Boat of the Year.

“One of the big factors of performance on a catamaran is displacement and Outremer scrutinise the weight of not only their layup and build of the hulls and furniture, but also the components and gear being installed on the boat,” Vaughan explains. “They go to great lengths to ensure that displacement is minimised and are known to measure the weight of the boat and its parts as it is being built to ensure they are on target.

“They also offer options such as carbon bulkheads, carbon rotating rigs, carbon rudders and other light-weight components like lithium batteries and performance sails.”

Vaughan says the brand tends to suit people who have already had a sailing boat or catamaran before because they can appreciate the benefits of performance over volume. “The helm seats with carbon tillers are a real thrill for sailors… cracking along at 16 knots in the groove with the direct feel of a tiller is an unbeatable sensation. To borrow a tag line, ‘only a sailor knows the feeling’,” he says.

Vaughan says the standard Outremers have enjoyed success in various regattas around the world, but they fit squarely into the performance cruising category because of their excellent offshore cruising capabilities.

Outremer has recently launched a racing version of the 5X, which was designed by VPLP who were heavily involved in the design of the Oracle AC72. It’s too early to get any race results from this version of the offshore cruiser, but Brent Vaughan describes it as “very exciting”.

For more information on Outremer cats, go to www.multihullcentral.com.

Another cat with America’s Cup connections is the HH55 which, like the TAGs and Outremers, is aimed at the short-handed blue water cruising market but, being all carbon, is very capable of strong performance at race weeks. Hudson Yachts says “safety and reliability are the cornerstone of this high performance catamaran”.

Naval architects Morrelli & Melvin have been designing high performance world cruising catamarans for many years while taking time out to write the rules for the 34th America’s Cup Match then get involved in the design process of the ETNZ and Luna Rossa AC72s. They are the brains behind the performance of the HH55.

According to Hudsons, “The performance comes from detailed weight analysis in design and leveraging the actual weights of other similar projects that M&M have been involved in. This ensures the weight is real and not optimised imagination.

“Performance also comes from the improvements that have been made in daggerboard and rudder technology using Morrelli & Melvin’s America’s Cup analysis to improve our design to give performance and safety without needing a professional race crew. The curved “C” dagger boards generate lift that makes the boat feel lighter and sail faster, while also smoothing out the ride in rough seas. The “T” rudders also add to the lift but primarily work to dampen the pitching of the boat, leading to better performance from the sail plan.”

As with all performance catamarans, there is a fine line between powered up and over-powered. But Hudsons say that has been addressed in the HH55.

“Safety and reliability come from conservative design and learning from experience,” they say. “The rig development has been a critical concern for us and the additional lower stays and baby stays have been added to ensure factors of safety prevail, even in third reef conditions when loads are at their greatest. We have been optimising the rig design with M&M as well as the world’s foremost multihull rig designers to ensure an extremely high quality product with adequate levels of safety for blue water cruising.”

For more information go to www.hudsonyachtmarine.com.

As with monohulls, you can race any multihull if you really want to. But if you’re looking for high performance on the race track as well as fast cruising and high-end luxury at anchor, these three brands all fit the bill.

There are multihull divisions at the major race weeks around the country and around the region. Cruising at 300nm a day, it doesn’t take long to get to New Caledonia for the Great Lagoon Regatta, for example, or to Bay of Island Race Week in New Zealand or even to Thailand for the Top of the Gulf.

Both Multihull Solutions and Multihull Central hold regular regattas for their owners, with an emphasis on fun as well as performance.

Monohull classes still dominate racing in this country, but Multihull divisions are growing rapidly. If your partner is dropping hints about the extra entertaining space on a catamaran and the speed at which you’ll reach your next destination, this could be a case where you can have your cake and eat it too. ✵