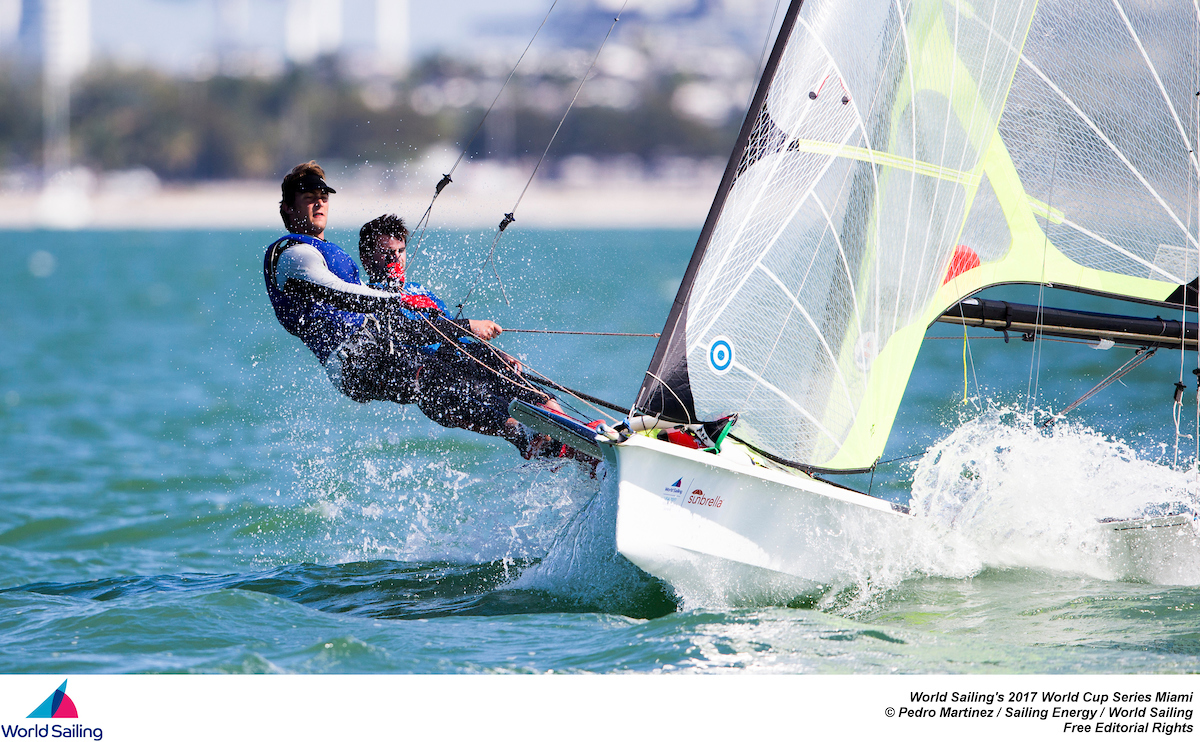 The 49er class has never been a bastion of consistency. The overpowered skiff is challenging to sail, and because it accelerates so quickly in the smallest increase in wind speed, lead changes are frequent. When you toss in a shifty and puffy westerly breeze that was forced to weave through the Coconut Grove skyline before reaching the racecourse, it's no surprise that the opening day of the 2017 World Cup Series Miami presented by Sunbrella was one of ups and downs throughout the 26-boat fleet.

The French duo of Lucas Rual and Emile Amoros started the day with a pair of seconds before slipping to 16th in the third race. With every team discarding its worst finish, Rual and Amoros have a one-point advantage in the overall standings over Dylan Fletcher-Scott and Stuart Bithell (GBR) and two points over Fred Strammer and Trevor Burd (USA) and the Lange brothers, Yago and Klaus (ARG).

With limited experience in the class, the French pair were a little surprised by their first day success.

“We sailed the 29er before for one year in 2013, and we started sailing 49er together in September [2016],” said Amoros. “That's why we are surprised. We work really hard and we're happy to be here. But it wasn't our goal [to be in the lead at the end of day one]. If we stay here it will be nice.”

Rual added that the primary goal for the regatta was to build confidence and determine, roughly, where they stand in the international fleet.

Another team looking to get a feel for things was the American duo of Fred Strammer and Trevor Burd. Unlike Rual and Amoros, Strammer and Burd have plenty of experience in the 49er, but with other crewmates. They have only sailed as a pair for 10 days.

“Fred and I got together this fall,” says Burd. “We both had different partnerships going into the U.S. Olympic trials last year. We just found we were the best available and the US Sailing Team gave us some support and said they wanted to see it happen, so we just went for it.”

Strammer and Burd started the day with a 14th, but then added a fifth and a first to the scoreline. It's very early in what may be a gruelling four-year effort to reach the podium at the Olympic Games in Tokyo 2020, but those early returns are promising.

That is not the case for sailing legend and five-time Olympic medallist Robert Scheidt (BRA) who has switched over to the skiff after a 20-year career of sailing—and winning—Olympic-class regattas in the Laser and Star. His first day of competition in the 49er class, with crew Gabriel Borges, produced a forgettable scoreline of 19-23-18, which leaves the pair in 22nd place. However, no one is expecting the Brazilian team to stay there for long. Last year around this time, people were wondering if the 40-something Scheidt could hang with sailors half his age in the physical Laser class. Then he won the regatta and went on to finish fourth in the 2016 Rio Olympics.

Thomas Goyard (FRA) and Kiran Badloe (NED) are tied for first in the Men's RS:X class with three points. Goyard will wear the leaders jersey tomorrow by virtue of his win in the third race.

There's also a tie at the top of the Women's RS:X with Hei Man H V Chan (HKG) and Emma Wilson (GBR) both on four points. China's Yunxui Lu is third, with seven points.

Karl-Martin Rammo (EST) had a strong start to his Laser regatta. A first and a fourth leaves him five points clear of Nick Thompson (GBR) with Tomas Pellejero (ARG) in third with 16 points.

Evi Van Acker (BEL) is a familiar name to anyone who's followed the Radial class. The 2012 bronze medallist is currently second, three points back of Vasileia Karachaliou (GRE) who has six points. France's Mathilde de Kerangat is third with 10 points.

Alican Kaynar (TUR) put together a first and a second to open his regatta in the Finn class and leads by two points over the regatta's defending champion, Brazil's Jorge Zarif. Great Britain's Ben Cornish is third, also with five points.

The gold medallists from Rio 2016, Martine Grael and Kahena Kunze (BRA) picked up right where they left off and are winning the 49erFX class courtesy of a tie break with two other teams.  Fellow South Americans Victoria Travascio and Maria Branz (ARG) are second while the Canadian duo of Erin Rafuse and Dannie Boyd are third.

Kazuto Doi and Naoya Kimura (JPN) had a first and a fourth and have opened up a three point lead in the Men's 470 class over Giacomo Ferrari and Guilio Calabrò (ITA). Panagiotis Mantis and Pavlos Kagialis (GRE) are third.

Afrodite Zegers and Anneloes Van Veen (NED) have the early lead in the Women's 470 class with four points in two races. Sophie Weguelin and Eilidh McIntyre (GBR) are second with six points while Silvia Mas Depares and Paula Barcelo Martin (ESP) are third with seven points.

The Nacra 17 class got in three races today. Lorenzo Bressani and Caterina Marianna Banti (ITA) have the lead after winning two races and discarding a second. Tom Phipps and Nicola Boniface (GBR) are second with four points and John Gimson and Anna Burnet (GBR) are third courtesy of a tie-break with Lin Ea Cenholt and Christian Peter Lübeck (DEN). Both teams have seven points.

Racing will continue from Regatta Park, Coconut Grove on Wednesday 25 January at 11:00 local time beginning with the Nacra 17 and 49erFX.