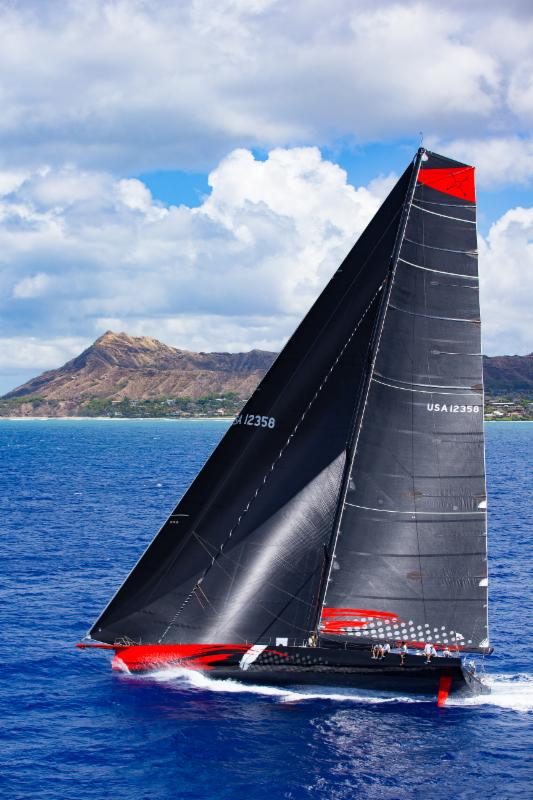 LOS ANGELES, CA – The Board of Directors at the Transpacific Yacht Club have announced they have loosened the restrictive criteria defining monohull yachts eligible to receive the First to Finish “Barn Door” trophy in the next 50th edition of the Los Angeles to Honolulu Transpacific Yacht Race, aka the Transpac. The start of this 2225-mile classic biennial ocean race that was first run in 1906 is scheduled for the week of July 8, 2019.

Specifically, when issued the Notice of Race for the 2019 edition will remove any restrictions on use of moveable ballast or non-manual power to define those eligible to receive this classic trophy, while boats that are first-to-finish contenders may not have a length greater than 100 feet overall (30.48 meters). This criteria is similar to that used in numerous other ocean races around the world, including the Sydney-Hobart, Fastnet, Middle Sea and other races.

From 2009 – 2017 those monohull entries that used moveable ballast or non-manual power were eligible to race, but the first boat to finish with these systems on board was not eligible to win this trophy, and instead were contenders for the Merlin Trophy.

Barn Door Trophy winners were often at the forefront of design and technology in their respective eras of racing. It was Barn Door Trophy winner Merlin in 1977 that by setting a new course record helped bring about a revolution in “Fast is Fun” offshore yacht design and the development of new classes of Ultra Light Displacement Boats (ULDB's). In 2005 it was Hasso Plattner's Reichel/Pugh maxZ86 Morning Glory that did the same with her canting keel system, now a standard feature on most first-to-finish contenders.

With this new more open criteria, any monohull that fits the length restriction and safety regulations may be eligible to win the Barn Door Trophy. This includes current-generation oceanic speedsters such as IMOCA 60's, Volvo 70's, and canting-keeled SuperMaxi's such as this year's Merlin Trophy winner Comanche. It is widely speculated that the announcement being made in one month from the organizers of the 36th America's Cup is for their new monohull design to include elements of foiling technology – this application on an offshore boat could conceivably also be used in a Barn Door contender in 2019.

“We are mindful of the traditions of Transpac to encourage the amateur yachtsman to participate in this great race and adventure across the Pacific,” said Tom Hogan, Commodore of TPYC. “This race will continue to attract those who want to challenge themselves and the sea, and we will continue to have many great awards to recognize their achievements in racing under handicap.

“Yet we also want to be among the other great races of the world in offering one of our oldest trophies to those who push the boundaries of technology to go as fast as possible in quest of higher and higher performance. Transpac has in the past been an inspiration to those who are on this quest, and we welcome them with this new incentive to join us in 2019.”

The complete Notice of Race for the 50th edition 2019 Transpac will be available in the first Quarter of 2018, but any further inquiries regarding the new Barn Door criteria may be directed to TPYC Technical Committee Chairman Alan Andrews at alan@andrewsyacht.com.