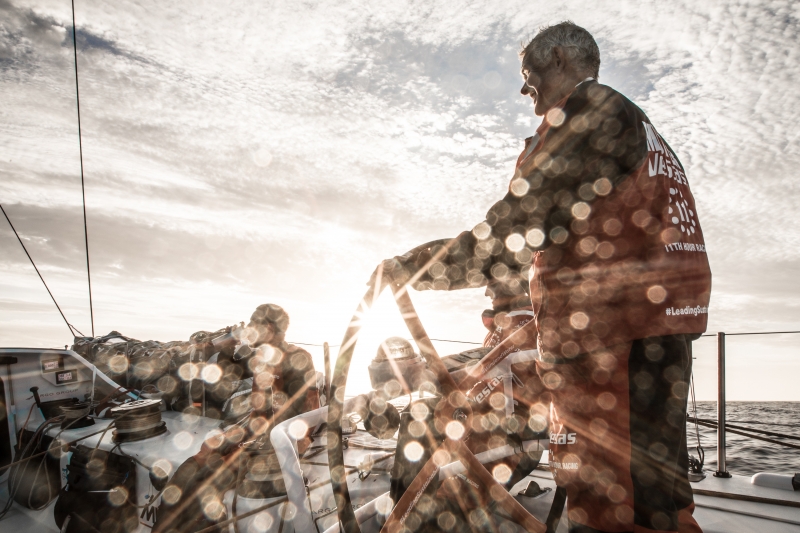 While it may be a relaxed Sunday for many around the world, that is surely not the case for the Volvo Ocean Race fleet battling for position in the South Atlantic.

In particular, the navigators and skippers are faced with choices that may largely determine their fate on Leg 2 as they race towards Cape Town.

On Sunday morning, with most of the leading group having finally gybed and sailing an easterly track towards Cape Town, Team Brunel defied expectations and turned back to the southwest in an effort to get closer to the stronger winds of a weather system that is expected to deliver the leading group towards their destination.

Before the gybe, Brunel skipper Bouwe Bekking explained the trade-offs in play. “One more very important decision to make is to get the timing right for the most likely final gybe into Cape Town,” he wrote. “You go too early, you sail a shorter distance, but with a chance to have less breeze. You go too late and you sail too many miles. So this is a crucial one to set us up. But even after that it is far from over. If you look long term, there are some very tricky passages still to come on this leg.”

Bekking needn’t look far to see the stakes in play. On Saturday morning, Dongfeng Race Team, who had been leading for much of Leg 2, appeared to cut the corner too close, sailing too far to the east, and were punished immediately for getting too close to the light wind area.

“Of course it's not a very good mood on board today; we lost so much in 24 hours,” wrote skipper Charles Caudrelier on Sunday morning. “We were in a perfect situation and we made a big mistake, playing too much with the high pressure and the light air… (But) six days to come back, and we never give up. We want a podium and we will fight until the end.”

After days of explaining away the rankings, with all the boats now pointing towards Cape Town, today’s 13:00 UTC position report is a much more accurate reflection of reality.

Vestas 11th Hour Racing heads the table, just marginally ahead of MAPFRE. But as watch captain and team director Mark Towill explains, the Spanish boat to the south is going to be hard to beat.

“MAPFRE has made a big play to the south and it looks like they’ve got more pressure down there so it will be interesting to see how that plays out over the next couple of days… We should see them move forward on us in the next couple of skeds. They look like the boat to beat right now. But there’s a lot of opportunity left… It looks pretty messy between here and Cape Town… Anybody could still win.”