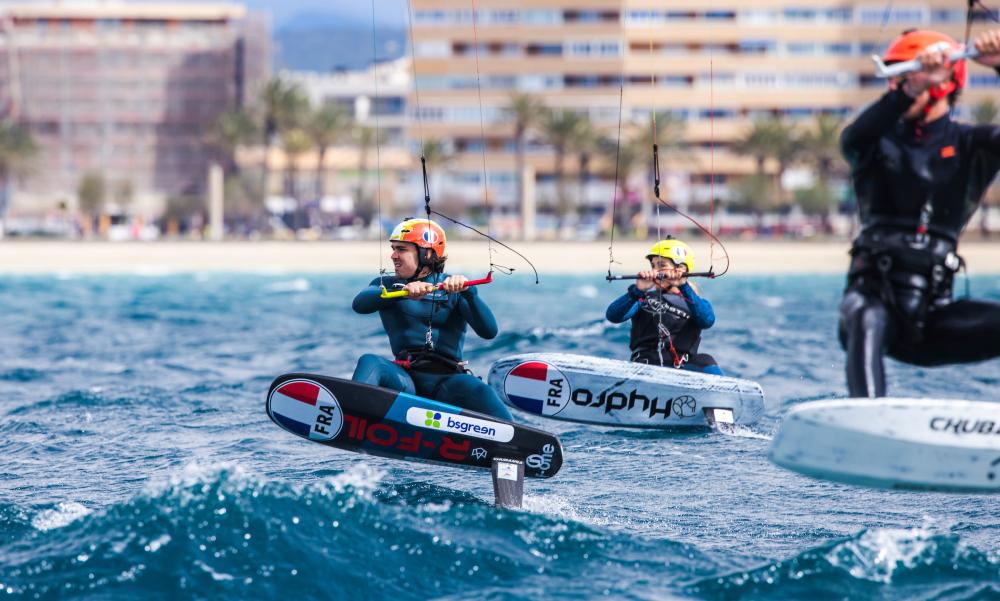 This year’s regatta marks the first time the new high-speed events in Olympic sailing line up at a world-class regatta alongside the more established classes. Pic - Sailing Energy

Palma, Mallorca will be the host to a new era of Olympic sailing competition starting this weekend.

With the Paris 2024 Games less than two and a half years away, there is a sense of urgency and enthusiasm among competitors to be sailing in world-class competition once again. Following a two-year hiatus caused by the global pandemic, there is a renewed sense of optimism in the spring air of Palma, as many sailors get to see, and race against, each other once again.

Organised jointly by Club Nàutic S’Arenal, Club Marítimo San Antonio de la Playa and Real Club Náutico de Palma, the Trofeo Princesa Sofía has long been the regatta to mark the start of the European racing season for the Olympic fleets. However this year is the first time since 2014 that the event has been part of the Hempel World Cup, the annual circuit for the Olympic elite. It’s a vital event for competitors to see how their training has been going over the past months and years, and an opportunity to make a statement of intent on the world stage at the start of the Paris 2024 Olympic cycle.

This year’s regatta in Palma also marks the first time the new high-speed events in Olympic sailing line up at a world-class regatta alongside the more established classes. Here’s a rundown of the 10 events set to take place at this and other regattas in the 2022 Hempel World Cup Series:

Formula Kite is a high performance hydrofoiling class using regulated series registered production equipment to limit campaign costs. Capable of speeds up to 40 knots, the foiling kiteboarders will become the fastest athletes in the 122-year history of Olympic sailing. Capable of achieving more than four-times wind speed in as little as six knots of breeze, the kitefoilers will be racing closest to the shore in Palma. To find out more, read here.

The French have been setting the pace in the early years of this new sport. Reigning world champion Theo de Ramecourt will be vying for French supremacy against the likes of Nico Parlier (son of Vendée Globe legend Yves) and Benoit Gomez. There are some seriously fast teenagers in this fleet too, notably Riccardo Pianosi from Italy who took third in the Worlds last season at the age of 16. Strong contingents from Spain and Denmark are entered, including four members from two generations of the Danish family, the Becketts.

The USA’s sole entry in the women’s division is also the stand-out talent in this fast-developing fleet. Daniela Moroz has been setting the pace in women’s kitefoiling for the past couple of seasons, including winning the Worlds last October. As with the men, the French are the strongest squad headed by the fast-improving Poema Newland. Ellie Aldridge is best of the British contingent, but the dark horse is Israel’s Gal Zukerman who, aged 15, notched up 18 straight race wins last December in Oman to win the 2021 Youth Sailing World Championships presented by Hempel. There’s plenty of local support for Gisela Pulido, a 10-time world champion in Freestyle, who also holds the record for youngest athlete to win a world championship in kitesurfing.

iQFoil is a foiling windsurfing class selected by World Sailing to replace the traditional planing board used for the past four Olympic cycles, the RS:X. For many of the RS:X sailors from the Tokyo cycle, the switch to the iQFoil couldn’t come soon enough. Now they have a piece of equipment capable of generating 30 knots of speed in as little as five knots true wind. Not only that, but many of the Tokyo athletes have gone from limiting their food intake to keep the weight down, to piling on the pounds as much as possible to cope with the power in the iQFOiL rig.

There’s a huge local entry of 26 Spanish competitors, with Angel Granda Roque among the best of the home-grown talent. A big squad from the Netherlands too, not least the RS:X Olympic Champion from Tokyo 2020, Kiran Badloe, who has bulked up by more than 15kg since the Tokyo Games. Other high-performers from the RS:X era now competing on the foiling board include Mattia Camboni (ITA), Louis Giard (FRA) and Tom Squires (GBR).

As with the men, there’s been a switch from the RS:X board to the iQFOiL in the women’s windsurfing division. Bronze medallist from Tokyo, Emma Wilson heads up the British squad, while Pilar Lamadrid is one to watch in the Spanish squad, currently ranked 2nd in the World Ranking. Brazil’s Giovanna Prada follows in the Olympic footsteps of her father Bruno who took silver and bronze in the Star keelboat at the Beijing and London Games alongside helmsman Robert Scheidt.

All three Olympic medallists from Tokyo 2020 are among the line-up in the Nacra 17 foiling catamaran. Respectively the gold, silver and bronze medallists will be hard to beat: Ruggero Tita/Caterina Banti (ITA); John Gimson/Anna Burnet (GBR); Paul Kohlhoff/Alica Stuhlemmer (GER). Then again, there are leading lights from the Rio 2016 Games here too, including the 60-year-old Olympic gold medallist Santi Lange (ARG), recently teamed up with Victoria Travascio, and the Rio silver medallists Jason Waterhouse & Lisa Darmanin (AUS).

Waterhouse has just arrived in Palma straight off the back of winning Season 2 of SailGP as flight controller aboard the Australian boat in San Francisco last weekend. The four-time World Champion Billy Besson dominated the early years of the Nacra 17 class and the Frenchman is back with new crew Noa Ancian to see if he can rekindle the glory years.

Previously men and women competed in separate doublehanded 470 dinghy events. For Paris 2024, the men and women sail together in 470 Mixed, and it’s caused quite a lot of musical chairs within national squads. As with the Nacra 17 catamaran, the technical question of whether to sail with male helm/female crew or vice versa is always on the teams’ minds.

Spain’s bronze medallist from Tokyo 2020 and only just back from skippering the Spanish F50 catamaran in the SailGP event in San Francisco last weekend, Jordi Xammar, is now teamed up with Nora Brugman on the trapeze. Among France’s strong line-up is former men’s world champion Kevin Peponnet who now sails with Aloise Retornaz, bronze medal crew from Tokyo 2020. The Women’s Olympic Champion from Tokyo, Eilidh McIntyre, is back in the boat, now with fellow Briton Martin Wrigley on the helm.

All-new black sails and a new mast give an updated look to the 49er skiff, and there’s a changing of the guard too now that the all-time greats Pete Burling and Blair Tuke (NZL) have moved on from Olympic competition. The Briton that beat the Kiwi legends to Olympic gold last year, Dylan Fletcher (GBR), has teamed up with new crew Rhos Hawes to see if he can establish himself as the dominant force in the Paris cycle.

Now in his 40s, the 2008 Olympic Champion from Denmark, Jonas Warrer, is back with a new crew Marcus Langagergaard. Diego Botin (ESP) narrowly missed out on the Olympic podium last year but is back with Nacra 17 Olympic representative Florian Trittel pulling the ropes on the Spanish skiff.

The 49erFX fleet is also sporting black sails for the first time. Clear favourites are the double Olympic Champions Martine Grael & Kahena Kunze (BRA). The 2016 silver medallist Alex Maloney (NZL) is sailing with new crew Olivia Hobbs. After a few years’ break from Olympic campaigning, Sarah Steyeart is back on the 49er with RS:X windsurfing Olympic Gold medallist Charline Picon switching to crewing at the front of the skiff. GBR Olympic crew and runner-up at the 2020 Worlds, Saskia Tidey is now crewing for Freya Black.

Perhaps the strongest of the new pairings are the Dutch crew, with recently crowned World Champion Odile van Aanholt teaming up with former rival, the double world champion and Tokyo Bronze medallist Annette Duetz. To find out more about the skiff fleets, read here.

Technically the only major change in the singlehanded dinghies is the change of name. The Laser Standard is now the ILCA 7, but it’s the same faces who are likely to dominate. The Olympic Champion from Tokyo, Matt Wearn (AUS), remains the man to beat, although there are plenty who believe they can do so. These include the Olympic Silver medallist at the last two Games, Tonci Stipanovic (CRO), and his training partner Pavlos Kontides (CYP), double world champion and Silver medallist from London 2012. The reigning world champion Tom Saunders (NZL) is coming on strong, and the 2021 Worlds runner-up Finn Lynch (IRL) will also be in contention.

Formerly known as the Laser Radial, the women’s singlehanded dinghy is now the ILCA 6. While the Olympic medallists from Tokyo 2020 are absent, all three medallists from the 2021 World Championship are in Palma: Emma Plasschaert (BEL), Agata Barwinska (POL) and Viktorija Andrulyte (LTU). Mara Stransky (AUS) and Vasileia Karachaliou (POR) are also likely contenders for the front of the fleet.