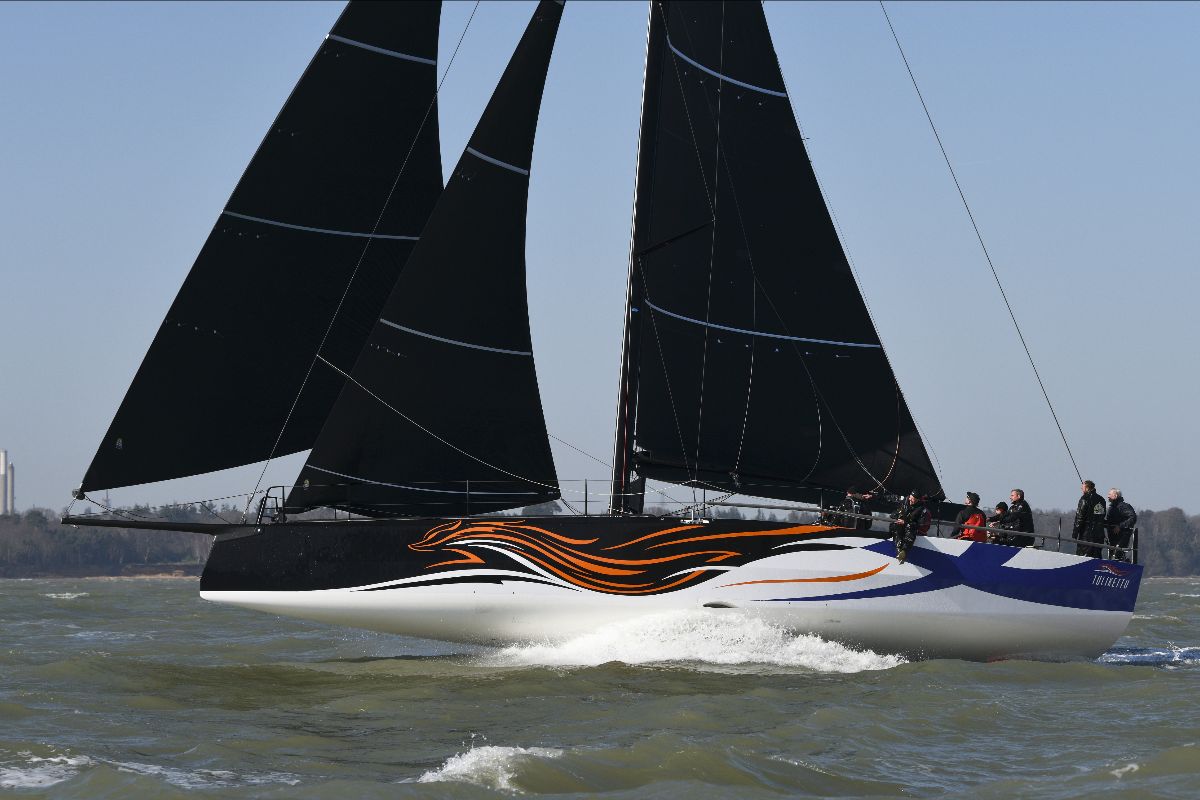 The first Infiniti 52 Tulikettu has been undergoing sea trials in the Solent, following delivery to her new Finnish owner Arto Linnervuo, in anticipation of a busy offshore racing program.

Already during her first sea trials she has hit 28-plus knots, with more than 30 anticipated and she has impressed her crew with her easy speed and bow-out attitude.

Designed by Hugh Welbourn, the Infiniti 52 is the first foil assisted high performance/racing yacht developed for semi-custom production. A brand-new entry to the race boat market’s busy 52ft sector, it is unique in several ways. Firstly, it is one of the few designed from the outset specifically to be campaigned offshore, rather than inshore windward-leeward racing.

But most significantly it is the only 52 fitted with a Dynamic Stability Systems (DSS) retracting lateral foil, the same technology as used on Canova, Sailing Yacht of the Year at the 2020 Superyachts Award and the Quant 23, the 2016 European Yacht of Year.

To recap DSS’s benefits: when the foil is deployed just beneath the water to leeward, it provides ‘righting moment on demand’; providing more lift the faster boat (and foil) pass through the water, just like adding crew weight to the rail or ballast to the keel. The net result is a significant speed boost.

The Infiniti 52’s DSS foil isn’t designed to make the boat fly, but it does significantly reduce displacement and drag, again increasing speed.

Most importantly, 15 years old, the DSS system and the subtleties of the foil’s shape, section, aspect, curvature and location are now highly refined (in CFD, tank testing and, most importantly, verified through 10,000s of race miles).

Understated and over-delivering, it remains the simplest, most reliable foil system, requiring no complex rake or other mechanical controls: It is deployed (via a rope on a winch) and left to do its job, no hydrodynamics PhDs or Olympic medals needed. It was these features, together with not wishing to take the overly large step into a fully flying yacht, that attracted Tulikettu’s owner.

The owner of Tulikettu, Arto Linnervuo, said, “So far I have found the DSS foil really simple to use, very logical. When we were just doing normal stuff, like upwind and reaching, it was much the same as usual but when we had some good reaching in heavier winds, it was actually much easier than I had thought.

“With this boat we like to have a heeling angle of 10-16 degrees and I thought it must be quite difficult to hit that range, but it was much easier than I thought. The boat is very stable and the rudder is really good and has good bite and with the foil you are less concerned about the amount of sail area you are carrying and broaching the boat.”

Central to Welbourn’s design philosophy is ‘easy speed’ and this has touched all areas of the Infiniti 52, most aided by the DSS foil. For example while there is a trend in offshore yacht design to have ever greater hull volume and form stability, especially around the bow, this is unnecessary on a DSS boat as the conditions when it is beneficial are when the DSS foil is generating maximum righting moment.

Thus the Infiniti is a ‘small’ (ie relatively low volume) 52 with noticeably less freeboard. It has a modest deck chamfer, a significant chine and a very flat underbelly. With the foil adding righting moment in ultimate stability conditions, the keel bulb doesn’t need to be as heavy, thereby keeping displacement light, again increasing speed.

Welbourn said, “The 52 is designed to be a good, fast all-round boat. She is quick in the light with a narrow, easily-driven hull and enough sail. Upwind, when you start to need the power, then water ballast and sometimes DSS provide the necessary grunt,  and then as you shift into wider and faster angles then the emphasis shifts rapidly towards solely using the foil and keeping the boat light.

The highly successful Infiniti 46 Maverick (class winner in the Rolex Middle Sea Race twice; in the RORC Transatlantic Race; Newport Bermuda Race, and overall winner of the SoCal 300), has all the ‘bells and whistles’, including twin ‘flip out’ DSS foils, plus a canting keel and canard.

In comparison the 52 is simpler with a single DSS foil sliding laterally across the bottom of the boat within its case. Instead of a canting keel and canard, it has a fixed keel and 600kg water ballast, split into twin tanks each side aft to add grunt upwind.

While the canting keel/canard is effective, it comes with complexity and a fixed weight, whereas water ballast can be jettisoned at any time, maintaining light displacement. The DSS foil is designed to be deployed and then left to do its job, but the water ballast does also permit the boat to be trimmed slightly stern down, which of course adds angle of attack to the foil, increasing its lift.

Less obvious is that while sailing upwind, the DSS foil may provide less lift, but one of its secondary features comes into play – in addition to reducing heel, the foil also significantly reduces pitching by up to 40 per cent, thereby improving the stability of the wind’s flow over the sails and maintaining driving force, especially when the sea state gets lumpy, improving VMG.

Since the Infiniti 52 is optimised for offshore usage, much effort has been made to keep water out. Thus the mast is deck stepped and with no apertures – all lines run out of the bottom of the spar through the deck and then aft to the cockpit through channels on either side of its shallowest of cabin tops. This also reduces windage aloft.

The Doyle sail wardrobe has been designed by Kiwi pro sailor Stu Bannatyne with number crunching from Stefano Nava. The mast from New Zealand Rigging has three tapering spreaders, held up with carbon fibre ECsix rigging. The three metre long bowsprit, above the reverse sheer bow, permits six tack points from the big downwind gear and jib tops at the end of the bowsprit to the furling J4/staysail and storm jib on the foredeck. This enables separation between the headsails to be optimised when sailing triple-headed.

The sails, made in carbon/Technora aramid, benefit from Doyle’s ‘structured luff’ technology that shares the load between the forestay and luff, reducing the overall load at the masthead (thus enabling structure/weight to be removed from the spar).

Stu Bannatyne, pro sailor and Doyle Sails expert said, “The Infiniti 52 is primarily a coastal and offshore racer and the whole package has been designed around that. If it was to line-up against a Super Series 52 in 12 knots upwind we would probably be a bit slower, but hopefully by not too much.

“Any reaching or downwind sailing, the Infiniti should be faster and not just in conditions where the DSS foil is being used – it should also be faster in underpowered conditions too, the boat has lower form stability and should therefore have lower drag. Then as soon as you get powered up reaching and running it should be a good chunk faster when using the DSS foil.

One of the biggest developments has been the push button operation of the powered Air 300 winches from Harken (which has supplied all the deck gear) and the hydraulic package from Diverse. On what is a quick boat, this enables the fastest possible trimming, via neat waterproof, deck-mounted switching units from CZone.

While a full-on, thoroughbred offshore racer, the keel foil and single rudder are relatively large and forgiving and the hull shape not overly sensitive to heel angle, recognising that Tulikettu has an enthusiastic owner-driver and a semi-professional crew. This can be adapted for a different crew configurations, for example if the boat is to be used for double handed sailing.

At a time when many rating rules are attempting to ‘protect the fleet’ – constraining the ability of boats to fly by effectively limiting the amount of vertical lift their foils can produce, the DSS configuration has the benefit of just falling within these limits. The Infiniti 46 Maverick, for example, has been regularly competing under IRC in RORC races and under ORR in the Transpac. Tulikettu, and the Infiniti 52 #2 that is soon to be completed, will do the same.

Designed to be sailed offshore with a crew of as few as seven, the program for Tulikettuis to compete in some RORC races in the Channel and the North Sea Race before heading up to the Baltic for Gotland Runt and the RORC’s new Baltic 600 race. This is the build-up to the Sevenstar Round Britain & Ireland Race and the Rolex Middle Sea Race, before the Infiniti 52 heads transatlantic for next year’s RORC Caribbean 600.

With the Infiniti 52 #2 due for launch at the end of this year, Infiniti Yachts has expanded its production capabilities by appointing a European builder for the Infiniti 52 to look after clients outside of the USA.