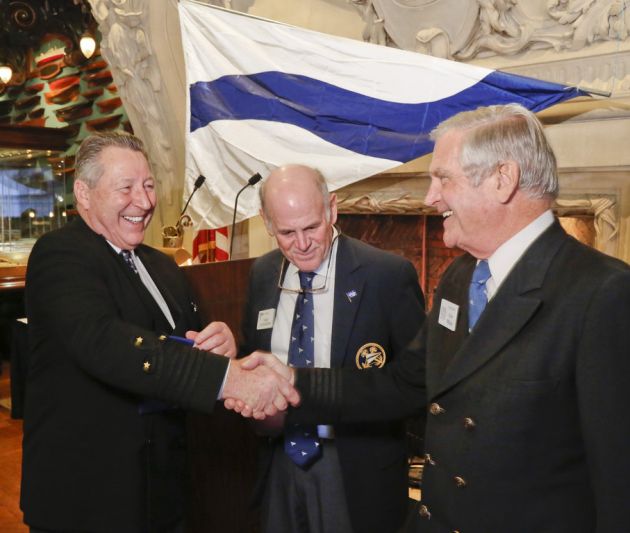 GREENWICH, CONN. (March 15, 2016) – In 1922 the first Reader’s Digest magazine was published, radio arrived at the White House, and Babe Ruth signed a three-year contract with the Yankees. That same year also saw a quieter milestone achieved with the formation of the Cruising Club of America, and unlike many organizations with brick and mortar facilities, this club without walls is – 94 years later – still fulfilling its original concept: to aid mariners who are passionate about offshore sailing.

The CCA started the next chapter of its history during this year’s Annual Meeting, held March 4 at the New York Yacht Club in Manhattan, when James Binch of New Canaan, Conn., and W. Bradford Willauer of Prouts Neck, Maine, were installed as Commodore and Vice Commodore, respectively.

“I am keenly interested in the broadest possible connotation of seamanship and having the CCA at the forefront of education, including on-line and hands-on training relating to that,” said Binch who learned to sail at the Royal Canadian Yacht Club in his hometown of Toronto, Canada, before venturing south to attend Princeton (1970) and Wharton (MBA 1972). He has been sailing offshore since the 1969 Miami-Montego Bay Race, and in 19 Newport Bermuda Races he has achieved a division win as well as second overall (1990). He also has sailed four doublehanded races, and has cruised in Croatia, Greece, Thailand, Turkey, New Zealand, the Great Lakes and the Caribbean.

“On my watch we also will significantly broaden our Technical Committee so that it includes the most prominent of our navigators, designers and naval architects, who can meaningfully address the topics of modern materials and designs, for monohulls and multihulls from an offshore passaging safety perspective. Similarly, as a leader in the advancement of rating rules, we will continue to move forward the dialogue concerning what is the most equitable VPP-based (Velocity Prediction Program) handicapping rule for our members and the North American sailing community, especially as it relates to Corinthian racing in modest-sized boats offshore.”

Binch explained that of the 1300 international CCA members, a significant 68% own a sailboat larger than 30 feet. “To be a member you have to have sailed several thousand miles offshore as either a watch captain, navigator or skipper,” said Binch, who joined the organization in 1991. “But we are not just an organization of cruising sailors as our name might imply. There are hard core racers too: 25% of the skippers in the Transatlantic Race 2015 were CCA members.”

Vice Commodore Brad Willauer is also a veteran Newport Bermuda race participant (18 times) and prize winner, including podium finishes in the last three editions of the iconic race. He learned to sail at Prouts Neck Yacht Club in Maine, where he has been Commodore (1973-75) as well as a fleet champion in the Yngling and Sonar classes. His sailing resume includes the Marion Bermuda, Halifax and Transatlantic (Bermuda to Spain) Races, while his cruising itinerary has found him in Croatia, Greece, Thailand, Turkey, the Caribbean, British Columbia and the Thousand Islands.

“In 1975 I was invited to join CCA and began to enjoy the truly friendly camaraderie members share with each other,” said Willauer. “I get to meet the many other blue water sailors around North America who have had similar experiences and with whom I can share a yarn or two. Sailing into an anchorage, I always look for CCA burgees on a masthead and find a way – if time permits – to say hello and share some grog.”

Sharing information gleaned through personal experience is the lifeblood of the club’s international membership. This fraternity of veteran sailors enthusiastically shares its experiential knowledge to promote cruising and racing by amateur sailors. Among the 12 founding members were young naval veterans of World War I, as well as several boat designers who pushed for balance between performance and safety; through the years the CCA has been a leader in developing and supporting rating rules that promote safe and stable competitive boats.

The CCA and the Royal Bermuda Yacht Club are this year celebrating the 90th anniversary as co-organizers of the biennial Newport Bermuda Race, and will send roughly 190 boats off on the 635-nautical mile race for the 50th time on June 17. Not only does the Newport Bermuda Race exceed standards as one of the most accessible blue-water races for the average sailor but also, as one of the world’s classic ocean races it never fails to attract elite competitors at the helm of next-gen high-performance yachts.